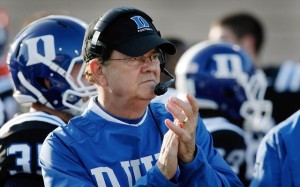 Baylor really fell off last year without Art Briles as head coach but still has some name recognition. Both Duke and Baylor will be looking to rebound after down years in 2016. This would be a good win for Duke to get early in the season.

I’m not really sure LSU is the type team Syracuse should be scheduling at this point in their development, but the Orange will be headed down to Baton Rouge for this one. LSU is loaded with athletes, and I’m curious to see if Dino Babers can get his quick strike offense going in this one.

This is still an in-state ACC\SEC rivalry game, and I expect this year’s game between Clemson vs South Carolina to be closer than last year. Actually how could it not, it was 56-7 last season. These programs are so far apart, that some of the luster has been taken off this game.

You’ll see non-conference games all over this series. I always find those games interesting. UNC has won 19 games the last two years, but it really hasn’t resonated nationally, because UNC hasn’t beat anyone of note outside the ACC. I’m not counting Illinois either. A win over California would be a nice way to start 2017.

This game is just fascinating to me. Why you ask? The Hokies have 13 game winning streak in the series. That means Virginia hasn’t beat Virginia Tech in football since 2003. As said on our podcast by @treadmillhorse, Virginia is probably recruiting players that have never seen Virginia beat Virginia Tech. How much longer can this streak go on?

This article was originally published at http://www.AllSportsDiscussion.com. If you are interested in sharing your website's content with SCACCHoops.com, Contact Us.
Categories: Clemson, Duke, Football, Recruiting, Syracuse, UNC, Virginia Tech