Can the Orange reverse the recent trend and get a win against the Tar Heels? 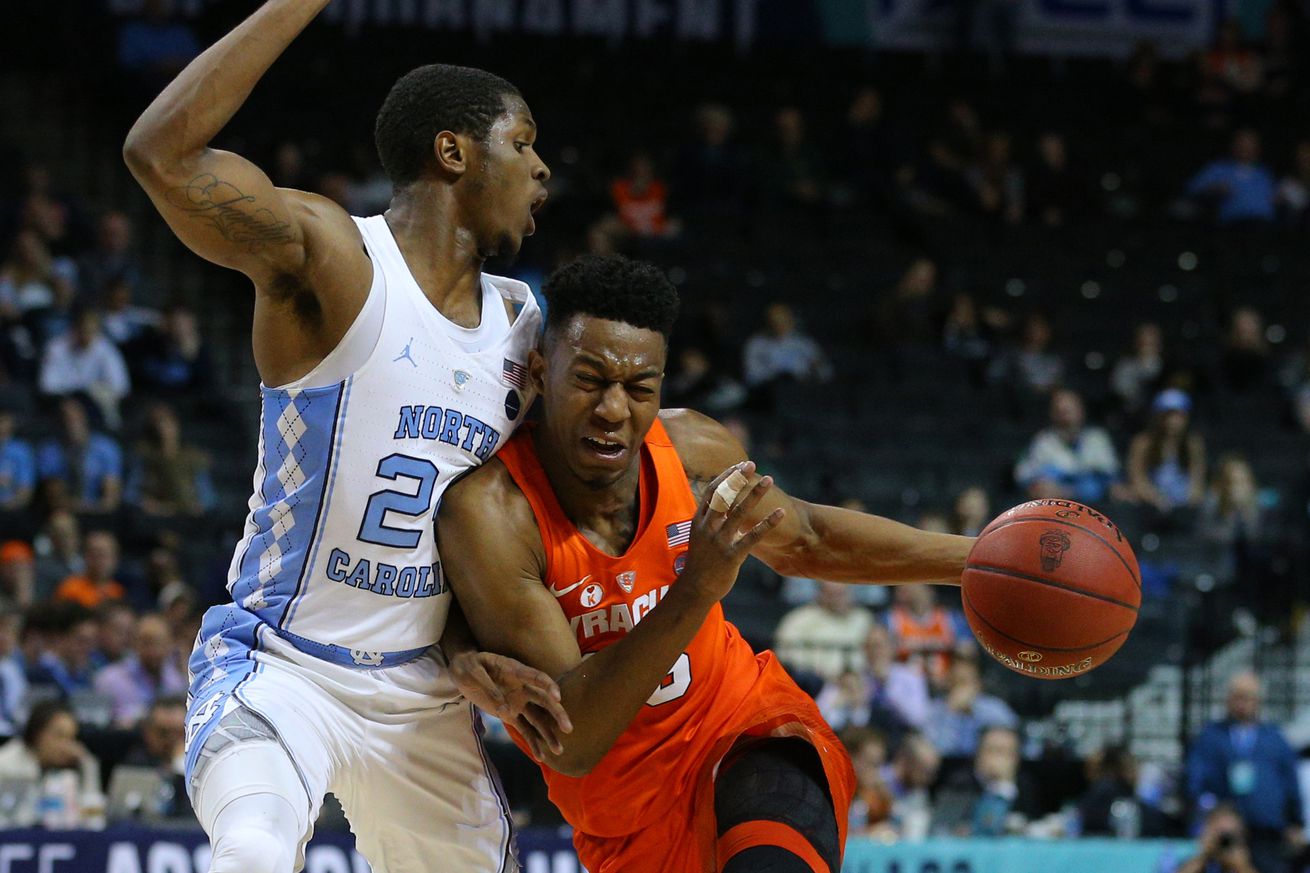 Fresh off an emotional and physical game with Duke, the Syracuse Orange hits the road to take on the North Carolina Tar Heels tonight at 9 p.m. ET. Syracuse (18-9, 9-5) is floating somewhere around the proverbial NCAA Tournament bubble, either on the right side of it, or right on the middle of it depending on how you think the rest of the season is going to play out. One thing is for certain, though, should the Orange beat No. 5 North Carolina (22-5, 12-2), on the road no less, then any bubble talk will go right out of the window.

Here are some potential keys for the game.

The Tar Heels have had their issues against the zone in patches of games, but eventually it seems as though Roy Williams and company figure it out like few other opponents of Syracuse. In fact, North Carolina has beaten the Orange in seven straight games.

In previous years, the Heels have been able to do damage on the inside. That’s through guards forcing the action by slashing to the rim and by having capable big men who are able to finish at the rim.

And it just so happens North Carolina’s Luke Maye has been a thorn in the side of Syracuse since his freshman year back in 1998. In last year’s ACC Tournament, Maye went for 13 points and nine boards in the Tar Heel’s victory over the Orange, and he recently has turned up his game.

Against Duke—which of course was playing without Zion Williamson—Maye tallied 30 points and pulled down 15 rebounds. Last weekend, the six-foot-eight center, who was named ACC Player of the Week, had a double-double of 15 points and 11 boards against No. 16 Florida State. (He also hit 2 of his 4 attempts from distance in the home win against the Seminoles.) The back line of the zone will be tested and the likes of Paschal Chukwu, Oshae Brissett and Marek Dolezaj will have to play tough without fouling.

Will Paschal Chukwu keep it going?

The seven-foot-two big man played 20 minutes against Duke last weekend at the Dome. That’s not exactly something to get excited about as a general rule of thumb. Overall, Chukwu did not have one of his best games in an Orange uniform. But he did “play” while he was out on the floor, scoring 8 points and grabbing six rebounds.

It’s not just the stats here, obviously, it’s the fact that Chukwu was a factor when he was in on Saturday. The center was active on defense, tipping rebounds and making the Blue Devils players work a little when they got in the paint. Especially so in the first few minutes, Chukwu played like a man with a purpose. It was a reminder that Chukwu doesn’t really have to do much to have an impact. Given his size, Chukwu, so long as he appears to be engaged, can be a factor by simply moving with reason.

And with North Carolina’s propensity to beat the Orange up inside, and with having players like Maye, Chukwu’s staying in the game for long stretches could ultimately be the difference in this game.

Then again, what about UNC’s guard play?

Cameron Johnson is scoring a team-leading 16.7 points per game and is shooting at a 52-percent clip from the field, 47 percent from deep. He went for 26 at Duke and 18 points against Florida State in the last two games. Furthermore, freshman Coby White could also be an issue for the Orange, as the guard leads UNC with 4.2 assists per game and hits 36 percent of his attempts from distance.

In that ACC tourney game at Barclays Center last March, guard Theo Pinson went off against Syracuse, scoring 16, pulling in 11 rebound and handing out six assists. Pinson and some second-half adjustments by Williams allowed for UNC to turn a somewhat competitive game into a route. Sure, Syracuse is a top-25 scoring defense this season, but there have been big-time struggles in the ACC, especially in games against Virginia Tech, Florida State, NC State. The Hokies and Noles did damage from deep, the Wolfpack, however, specifically in the second half, took it to the Orange by getting good looks from closer to the rim. Expect the Heels, like in recent years, to not settle from deep.

Who is running point for Syracuse?

It might not totally matter, and Dylan asked this in the run up to the last game, but the position of point guard, or at least who’s handling the ball, has been an issue at times this season. On Monday, Coach Jim Boeheim said that Tyus Battle “is still at the two,” despite the junior’s playing on ball for significant potions of the season. That’s been in some part due to Frank Howard’s missing time with injury early, but over the course of ACC play, Battle has certainly been given the keys to the show in crunch time.

For an offense which has had significant issues, it has looked like Syracuse finds something of a rhythm when Battle has the ball at point and Elijah Hughes and Buddy Boeheim are running the wings. That lineup frees up Battle for his patented 17-foot pull-up jumpers or for the junior to drive and kick the ball out for a deep shot.

On the other hand, the woes on offense for the Orange aren’t totally the responsibility of Howard. He is a veteran who has been through the wars. Someone who, despite what some people think, has had moments lately. Not to mention, the senior guard has seen the way North Carolina will attack Syracuse both on offense and defense.

The question is: can Howard play a complete game on both ends of the floor and make plays when it matters? Against the Devils, Howard was prone to pick up his dribble instead of either attacking or resetting the offense later in the game on offense. That type of hesitation will lead to another loss tonight.

Will the Orange beat a ranked team on the road other than Duke?

Going back to 2016, Syracuse has exactly two wins on the road against ranked foes. Both of those opponents just so happened to be the Blue Devils of Duke (‘16 and ‘19). Outside of Durham, NC, the Orange beat top-10 Notre Dame in South Bend, Indiana back in 2015.

North Carolina isn’t just having another good season, the Tar Heels could find themselves winning the ACC regular-season crown and earning a number one seed in the upcoming NCAA Tournament. So a loss here for the visiting Orange, or any other team, would not be a surprise. It’s a tough world to go on the road and beat a ranked team from your own conference regardless. But if the Orange is ever going to crawl back out of Permanent Bubble status, then it has to start winning these types of games, doesn’t it?

This article was originally published at http://nunesmagician.com (an SB Nation blog). If you are interested in sharing your website's content with SCACCHoops.com, Contact Us.
Categories: Basketball, Preview, Syracuse, UNC