A daunting two game stretch is about to begin for the Irish. 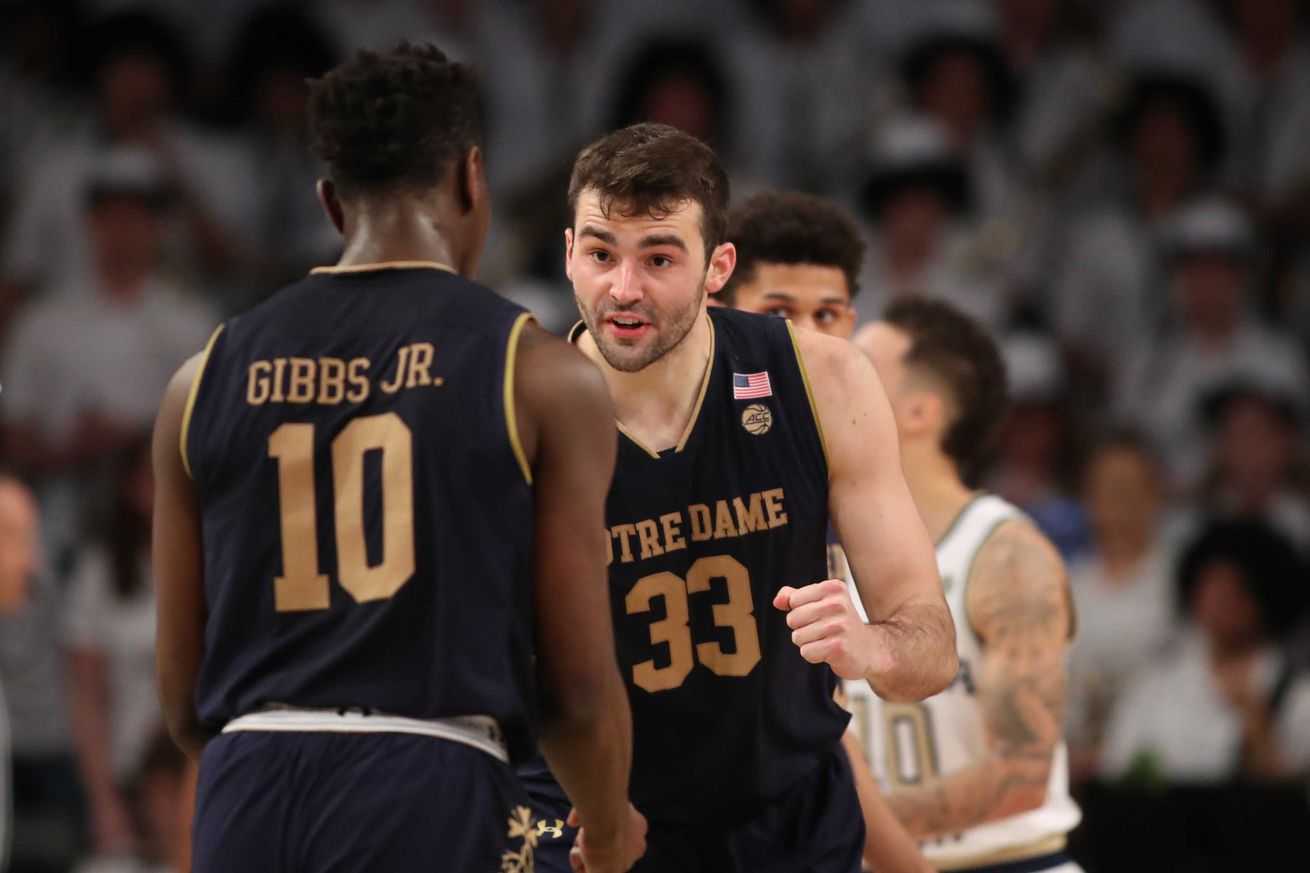 Ladies and gentlemen, it’s time for the worst 72-hour stretch the last place team in the ACC (well, technically tied for last — and technically ahead of Miami and Wake Forest due to overall record...but still) could possibly ask for, as the Notre Dame Fighting Irish square off against the #3 Virginia Cavaliers at Purcell Pavilion tomorrow afternoon before playing host to the #2 Duke Blue Devils on Monday evening.

The Irish are 11-8 overall and 1-5 in conference play, having dropped three straight since barely eking out a win at home against the Boston College Eagles two weekends ago. The Cavaliers, meanwhile, are atop the ACC standings with a 5-1 ACC record and a 17-1 overall record.

It’s the longest of shots, no doubt, but let’s dive into the details and see what ND is up against tomorrow when Virginia comes to visit.

In case it isn’t made clear by their near-perfect record or #3 ranking, let me reiterate: VIRGINIA IS AN INCREDIBLY GOOD BASKETBALL TEAM.

The Cavaliers are #1 in KenPom.com’s efficiency rankings (#4 on offense, #2 on defense), and are doing some crazy elite things on both sides of the ball.

On the other side, the Irish compare unfavorably in just about every category, save for turnovers (#3 in the country with just 9.6 per game) and fouls (#1 with just 13.7 per game). The Irish are #73 overall in KenPom (#69 on offense, #103 on defense), and have some truly bad rankings in major, important statistical categories.

Offensively, the Irish rank a putrid 306th in overall shooting (41.5% from the field), 212th from long range (33.7%), and 152nd in scoring offense (74.7 ppg). Needless to say, that kind of offensive production does not bode well for playing one of the best defenses in the country.

The Cavaliers are led by a trio of talented guards, starting with 6’2” junior Kyle Guy. You may remember Guy as the young gunner with a man-bun who was barked at by Bonzie Colson a couple years ago after Colson swatted his shot into nothingness in the ACC Tournament. Guy has only gotten better and become a more complete offensive player since then, and is now leading this offensive efficiency titan in scoring, averaging 15 points per game to go along with 4.4 rebounds, 2.1 assists, 87% shooting from the charity stripe, and a SCORCHING HOT 45% average from deep. The kid can play.

6’7” sophomore wing De’Andre Hunter is right behind Guy in scoring, putting up 14.4 points to go with 5.3 rebounds and 2.2 assists per game. He shoots 53% from the floor overall, 80% from the line, and an equally-scorching 44% from long range, adding fantastic length and size to the Cavaliers’ perimeter while still bringing the shooting and efficient ball handling that Tony Bennett loves.

6’5” junior Ty Jerome is another guy Irish fans will recognize, as he’s been a major contributor, like Guy, since his freshman year. Jerome averages 13.1 points per game and hits 40% of his threes, giving UVA yet another guy who can knock down shots from basically anywhere past mid-court. He also snags 4.1 rebounds per game and dishes out a team-leading 4.8 assists, and also averages nearly 2 steals per game on defense with his good size and fantastic hands.

Outside of that guard trio, the Cavaliers have some serious height and length they like to employ as well, with Braxton Key, Mamadi Diakite, Jack Salt, and Jay Huff all measuring 6’8” or taller. Huff is the tallest of the group at 7’1”, but the sophomore plays just 9 minutes per game. Nevertheless, he’s certainly made the most of that time so far, averaging 5.4 points, 2.4 rebounds, 1 block, 71% shooting, and 64% shooting from three point range.

Key, Diakite, and Salt are more important guys in the rotation, as the 6’8” junior Key averages 7.4 points and 5.7 rebounds, the 6’9” junior Diakite scores 6.6 points and grabs 3.6 rebounds (while also shooting 55% from the field, 86% from the line, and 33% from deep), and the 6’10” senior Salt plays within himself to average 4.6 points, 4.9 rebounds, and 57% shooting each game. Those guys, along with Hunter and Jerome also having some good size, will likely give the Irish some fits both with their defense and on the glass, as the shorthanded Irish don’t have a ton of length or size to draw from.

5’9” freshman guard Kihei Clark has been a solid addition this year as well -- he’s averaging 4.3 points, 1.7 rebounds, 2.2 assists, a steal, and 83% free throw shooting on the year, so look for him to be a spark plug and playmaker when Guy/Jerome take a breather.

Overall, this Virginia team has already won vs. the Wisconsin Badgers, at the Maryland Terrapins, vs. the Florida State Seminoles, and at the Virginia Tech Hokies, so it’s clear at this point that their 17-1 record is no fluke or mirage. They did not play their best at #2 Duke last weekend and still managed to only lose by 2 points, so that may be the scariest fact about them overall. These guys can play both sides of the ball as well as anyone in the country, and the Irish likely won’t have many answers on how to hang around in this one.

I don’t think anyone on this Notre Dame team has the athleticism, size, and experience necessary to match up with Hunter. This would certainly have been Rex Pflueger’s man-to-man assignment if he were healthy, but without Rex, I just don’t see anyone who will be able to slow Hunter down. Goodwin may be the best bet, but he can’t guard Hunter the whole game, and I don’t think anyone else can both defend him on the perimeter and also have the size to challenge him if he drives to the hoop. I think he’ll have a big day.

For the Irish to have any chance against this Virginia defense, they need to take care of the ball and need someone who can pick his spots in terms of penetrating, driving to the rim, kicking it out for threes, etc. Hubb is the primary ball handler for this squad at this point, so this falls to him. If he can play within himself and make good decisions that don’t lead to late-in-the-shot-clock deep three pointer attempts from him, maaaaaybe the Irish can have a shot in this one. Hubb has to play the best game of his young collegiate career for that to happen.

If Red Panda were performing at halftime, my answer would be different, but unfortunately Irish fans won’t be seeing her until the Duke game on Monday. I think the Cavaliers have too much length and shooting and experience, and Tony Bennett’s defensive system is way too efficient for one of Brey’s worst offenses ever to beat it.

This article was originally published at http://OneFootDown.com (an SB Nation blog). If you are interested in sharing your website's content with SCACCHoops.com, Contact Us.
Categories: Basketball, Notre Dame, Preview, Virginia