Louisville will look to capture some momentum in Chestnut Hill as it prepares to move into March. 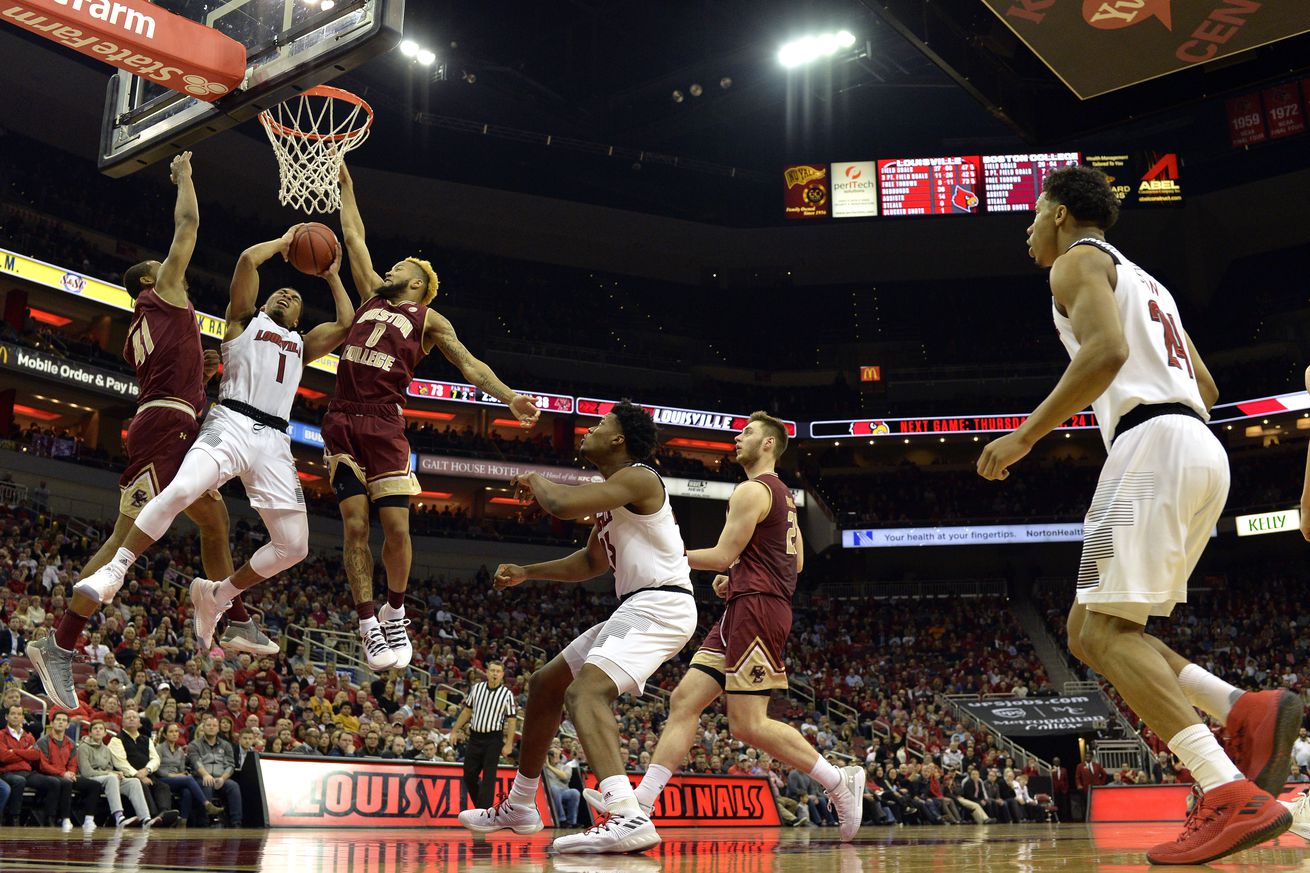 Though it’s just 4-10 in conference play, Boston College will be shooting for its third consecutive home victory when it plays host to Louisville Wednesday night. the Eagles knocked off Pittsburgh (66-57) and Miami (64-57) before suffering back-to-back road losses to NC State (89-80 in OT) and Clemson (76-66) over the past week.

Just as they were when they visited Louisville last month, Boston College is loaded with offensive talent at the guard position. The most talented of that contingent is junior guard Ky Bowman, who is one of just three player in college basketball averaging at least 19.3 points, 7.6 rebounds, 4.0 assists, 1.3 steals, and 0.6 blocks per game. No player in Division-I has put up that stat line since Penny Hardaway did at Memphis State in the 1992-93 season.

Bowman had a so-so outing in the first meeting with Louisville. He put up a more than respectable line of 14 points, 13 rebounds and seven assists, but he was just 6-of-17 from the field and 0-for-6 from beyond the arc. He also turned the ball over five times.

The star of stars in that game for BC was senior guard Jordan Chatman, who almost single-handedly shot the Eagles back into the game in the second half. Chatman was 6-of-10 from three against the Cards, and finished with a team-high 21 points. He enters Wednesday night’s game having connected on 7 of his last 12 three-point attempts, but he’s also been dealing with a finger injury that forced him to miss Saturday’s game against Clemson. Boston College head coach Jim Christian said Tuesday that Chatman would return to the court against the Cardinals.

Junior Nik Popovic is Boston College’s most reliable and consistent inside presence. The 6’11 native of Bosnia & Herzegovina is averaging 13.7 points and 7.2 rebounds per game, and has scored in double figures in all but two of the games in which he’s appeared this season. He posted 14 and 7 in the first meeting with Louisville.

Freshman guard Wynston Tabbs is the team’s second-leading scorer at 13.9 ppg, but has been sidelined for the last nine games with a knee injury. If he plays against Louisville Wednesday night, it will be a surprise.

Boston College gets a significant amount of production from its top three (or four, if Tabbs is healthy) performers. The Eagles are the only team in the country with at three players who average 13.7 ppg, and one of just two (Texas Southern is the other) with three or more players averaging at least 7.2 rebounds per game. The issue for Christian and company has been getting more from the supporting cast. Four other BC players are averaging at least 15 minutes per game, but none are averaging better than 6 points or 4.2 rebounds per contest.

As was the case when these two teams met over a month ago, BC is an odd case study. They have a handful of really talented offensive players who just haven’t been able to click this season. They also have multiple guards who have proven themselves to be lethal outside shooters in the past, who are shooting the three-point shot at career-low clips this season. The Eagles’ defense is actually right around or slightly better than where it’s been in each of Christian’s previous four seasons on the job, but the team’s record is not reflecting that.

STRENGTHS: Having Ky Bowman, having capable outside shooters, getting to the free-throw line, blocking shots, experience, three-point defense.

—Louisville has won six consecutive games against Boston College and is 5-0 against the Eagles in ACC play.

—Boston College is 9-6 at home this season, including a 3-3 record in ACC play.

—This will be Louisville’s first game against a team that wasn’t ranked in the preseason AP top 25 since visiting Wake Forest on Jan. 30.

—Bowman is the only player in the ACC to rank among the league’s top 10 in scoring, rebounding, and assists.

—Jordan Nwora is the second-most improved scorer in the nation with his 17.3 scoring average (fifth in the ACC) up 10.6 ppg from his 5.7 average last year.

—Dwayne Sutton’s next rebound will be the 600th of his college career.

—Louisville is 4-5 this season in games decided by five points or less or in overtime. Boston College is 4-3 in the same category.

—Louisville is 16-13 all-time in games played on Feb. 27. The Cards have won three of their last four played on this date.

—Boston College is 7-2 all-time when Jordan Chatman makes five or more 3-pointers, but one of those losses came earlier this season against Louisville.

—Louisville is one of just four schools which have won 20 or more games on the court in each of the last 16 seasons (also Kansas, Duke and Gonzaga).

This article was originally published at http://www.CardChronicle.com (an SB Nation blog). If you are interested in sharing your website's content with SCACCHoops.com, Contact Us.
Categories: Boston College, Louisville, Preview