Will Mike Brey’s squad finally get an ACC win tomorrow against the struggling Boston College Eagles? 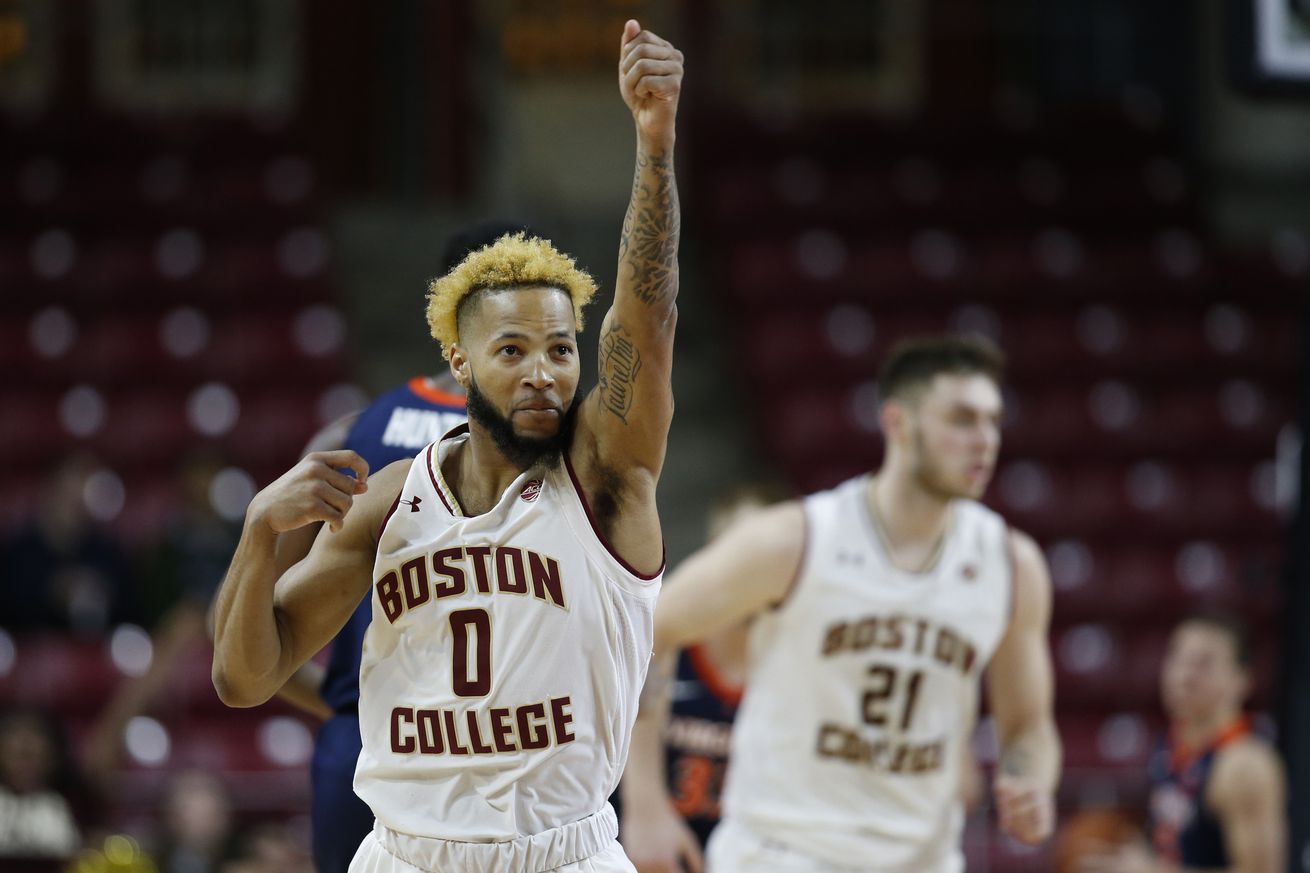 The Notre Dame Fighting Irish men’s basketball team will be back at it again tomorrow, hosting the Boston College Eagles in a battle of teams with nearly identical records after the 10-point loss the Irish incurred at the hands of the Syracuse Orange last Saturday.

Notre Dame enters the game at 10-5 overall and 0-2 in ACC play, while the Eagles are currently sporting a 9-5 record and an identical 0-2 ACC start. Translation: one of these teams HAS to win an ACC game tomorrow.

So, on a day when Notre Dame men’s hoops legend Bob Whitmore will be inducted into the Purcell Pavilion Ring of Honor at halftime, how will the Irish perform against BC? Let’s dive into the details and see what might happen.

The Boston College Eagles have had a bumpy beginning to the 2018-2019 season, and it’s hard to blame them after the departure of All-ACC guard Jerome Robinson meant losing 20.7 points, 3.6 rebounds, 3.3 assists, and 41% shooting from long range.

BC has managed to lose to Hartford Hawks and IUPUI Jaguars in the early stages of non-conference play this season, and were handed a rough early ACC slate with match-ups against two top-10 teams from Virginia, falling at the hands of the Virginia Tech Hokies and the Virginia Cavaliers in the past week or so.

However, it hasn’t all been terrible for the Eagles, as they managed to defeat defending Final Four team Loyola-Chicago Ramblers and also the Minnesota Golden Gophers, with the BC roster showing that despite the inconsistent beginning to the season, there’s some talent there.

Coach Jim Christian’s most talented guy and biggest weapon is certainly junior guard Ky Bowman, a guy whom will be recognized by any hardcore ND fan as that pesky kid who had dyed-red hair who was always a pain in the ass and knocking down shots the past couple years.

Bowman stepped into the lead role once Robinson left, and is averaging 20 points, 7.4 rebounds (as a 6’1” guard!!!!), 3.5 assists, 1.6 steals, 0.8 blocks, and 35% shooting from three point range. This team generally goes as he goes, and T.J. Gibbs and Prentiss Hubb will have their hands full trying to shut him down — the dude is now an experienced veteran who knows how to score and how to carry the team.

Aside from Bowman, there are a couple other guards to watch out for on the Eagles. True freshman Wynston Tabbs has stepped into the lineup and seized the #2 scorer spot, dropping in 14.2 points per game and accompanying that production with 4.1 rebounds, 2.8 assists, and just over one steal per game. He’s been key in helping Bowman pick up the perimeter scoring slack when Robinson left.

Senior Jordan Chatman is another guy who can score a little bit, as the 6’5” senior wing averages 12.5 points, 2.3 rebounds, and 2.1 assists as a key leader for Jim Christian. He’s the only senior who sees significant minutes on this team.

Another face many of you will recognize is junior forward Nik Popovic, whose 6’11” presence is perpetually felt in the paint. He’s cranked up his game another notch this year, scoring 13.7 points per game while grabbing 7 rebounds and swatting 1.1 shots per contest as well. He, 6’8” true freshman Jairus Hamilton (6.4 ppg, 5.2 rpg), and 6’8” sophomore forward Steffon Mitchell (5.2 ppg, 8.5 rpg, 2 apg, 1.5 spg, 0.7 bpg) are the names to know inside for Boston College.

Watching Popovic square off against Juwan Durham should be particularly fun, as two junior big men with lots of height and shot-blocking ability is sure to give us some fun plays at the hoop.

Throw in freshman guard Chris Herren Jr. as a threat from deep (only 5.2 ppg, but he shoots 38% from long range) and 6’4” junior guard Jared Hamilton as another minor contributor, and the Eagles won’t exactly be a pushover for the struggling Irish.

However, considering the Eagles shoot just 30% from deep and will be on the road, I like the Irish’s chances if Gibbs and Hubb are able to slow Bowman down, if John Mooney can continue his rampage in the paint, and if D.J. Harvey is able to turn in a full game of offensive efficiency and production.

Bowman leads the Eagles in points, assists, and steals, and is second on the team in rebounds and blocks despite being a 6’1” guard. He is absolutely the key for BC — they can’t win without him having a fantastic game, so it will be interesting to see if he can do enough to earn BC the W. Honorable mention goes to Nik Popovic, who could really weaken the Irish by playing well inside and potentially putting Durham and Mooney in foul trouble.

Gibbs will knock down some threes, Mooney will get his double-double, Durham will block some shots, and Hubb will miss some threes. But what the Irish truly need is for Harvey, who is still struggling with getting back to full strength from his 2018 knee injury and surgery, to emerge as the key, consistent scorer he can be. Harvey is one of the only guys on the team who can consistently create his own shot and knock it down from anywhere, and it’s critical that he does so throughout the entire game (he seemed to fade down the stretch last weekend against Syracuse). If he can give the Irish ~15 points, it’d go a long way in helping the Irish win their first conference game of the season.

I think being at home and playing a not-great shooting team will pay dividends for the Irish, who win a pretty close game over a not-great opponent.

This article was originally published at http://OneFootDown.com (an SB Nation blog). If you are interested in sharing your website's content with SCACCHoops.com, Contact Us.
Categories: Basketball, Boston College, Notre Dame, Preview