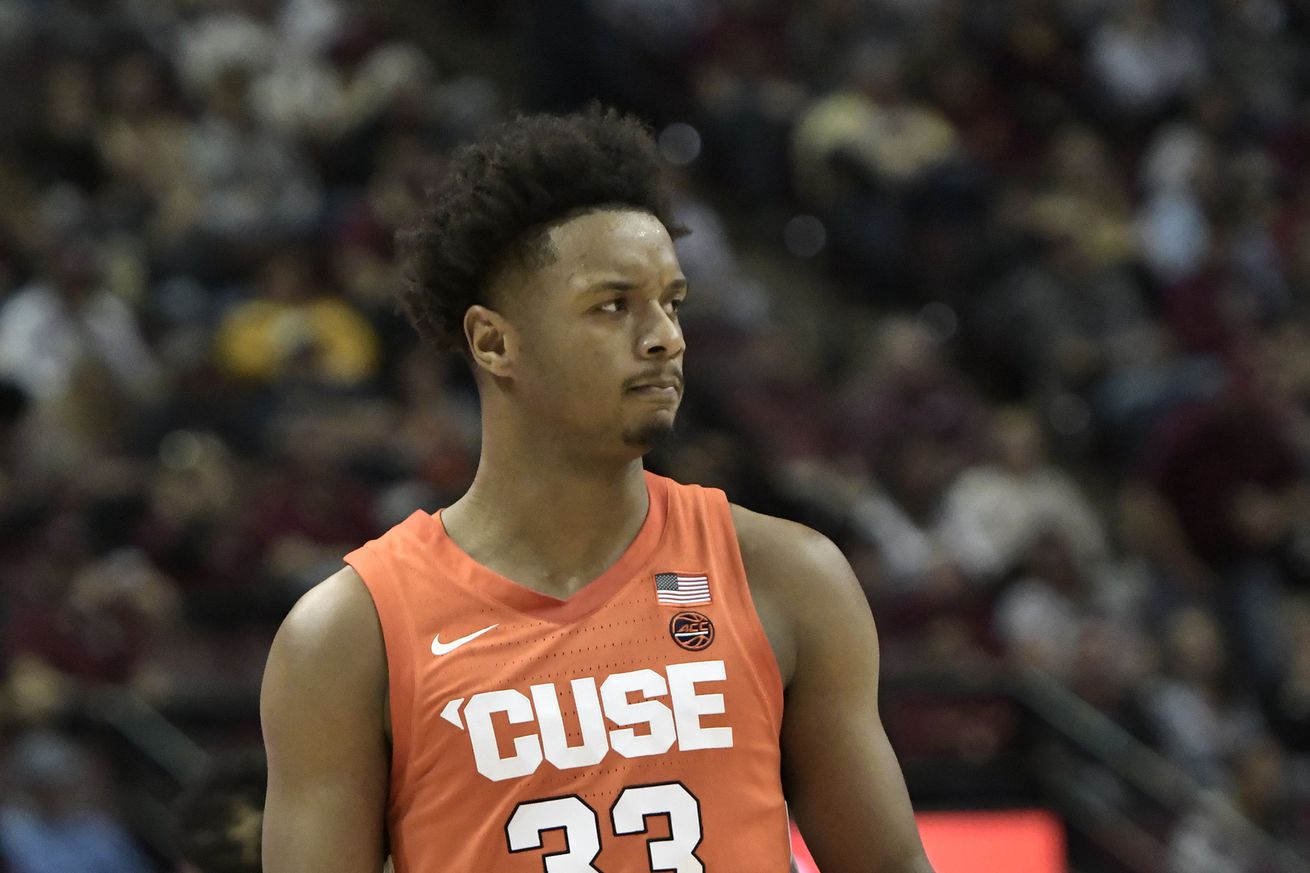 In the second to last ACC road game of the 2019-20 season, the Syracuse Orange men’s basketball team handled Boston College by a final score of 84-71 on Tuesday night.

Boston College played without senior center Nik Popovic, who missed the game due a back injury. Jared Hamilton and Jarius Hamilton were also out with an ankle injury and knee injury, respectively.

Despite losing three of its top five scorers, Boston College still came out strong to build an early 8-4 lead over Syracuse. The Orange fell behind out of the gate, which led to Jim Boeheim turning to Howard Washington just three minutes in to run the point.

Not long thereafter Syracuse would respond with a 9-0 run fueled by Elijah Hughes. Buddy Boeheim got the run started with a layup on the break, but Hughes scored seven straight points to give Syracuse a 13-8 edge.

Boston College responded with a pair of 3s by Julian Rishwain, but Syracuse would answer with the jumpshot of Hughes. Marek Dolezaj scored 6 first half points and Buddy Boeheim scored 9. The latter of the two found a bit of brief rhythm in the first half by knocking down a 3-ball and a pull up jumper, but he was just 1-5 from distance in the first half.

Boston College did most of its damage from beyond the 3-point line in the first half by shooting 6-18 from beyond the arc. But Syracuse was able to take a 35-27 lead into the break by and large due to Hughes’s 17 first half points.

In the second half, the younger Boehiem got things going by knocking down a jumper from the foul line. On the ensuing possession, he gathered a pass at the top of the key, lifted his defender with a pump fake, took one escape dribble to his right and buried a 3-ball to give Syracuse a 40-27 lead.

Boston College quickly called a timeout and responded with a small run. But after that it was all Orange as the second half turned into the Hughes and Boeheim show.

Boeheim caught fire and Hughes continued his hot shooting in the second. At one juncture, Hughes and Boeheim scored six straight field goals for Syracuse. Boeheim scored 12 second half points while Hughes scored 11. In doing so, the Orange duo broke the game wide open.

To some avail, Boston College was adamant on shooting from the perimeter, but it couldn’t come up with the stops it needed to make a run. Bourama Sidibe came on strong down the stretch by out-muscling the shorthanded Eagles. He ripped an offensive rebound away from Luka Kraljevic at one point and finished with a dunk. Sidibe kept at it on the glass and finished just one point shy of a double double with 9 points and 12 boards.

Boeheim got the bench some extended run as Washington, Brycen Goodine and Jesse Edwards got some time down the stretch. Edwards scored on an and one off a sweet look-away pass from Hughes. Goodine had an and one of his own and shot 3-3 from the line while Washington shot 4-4 from the charity stripe.

Boston College made an impressive 19 shots from beyond the arc to keep things somewhat close, but in the end Syracuse earned an 84-71 win.

Hughes led Syracuse in scoring with 28 points and 4 rebounds. Boeheim had 21 points in total.

Syracuse hits the road for the final regular season game at Miami this Saturday. That game tips at 4:00 p.m. ET and will air on the ACCN.

This article was originally published at http://nunesmagician.com (an SB Nation blog). If you are interested in sharing your website's content with SCACCHoops.com, Contact Us.
Categories: Basketball, Boston College, Florida State, Recap, Syracuse