Can the ACC remain college football's top conference beyond 2016? - SCACCHoops.com

Can the ACC remain college football's top conference beyond 2016?

Never thought I’d see this happen. Here’s a video of @finebaum saying the #ACC is the best conference in CFB. pic.twitter.com/W2dJLvHXfc 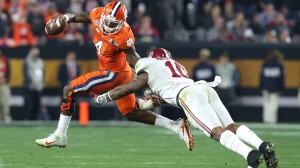 You know the numbers – the National Champion with Clemson, 10-4 against the SEC, 6-2 against the Big 10. Florida State’s win over Michigan, plus Clemson’s 2 bowl wins had the 3-0 in Big 6 bowls. I’m still astonished that the ACC managed dethrone the SEC as the king of college football even for 1 year. This was a conference that lost 13 BCS Bowl games, and went over a decade without a national title contender.

Can the ACC remain college football’s top conference? ESPN was asking that question too in their article “ACC has finally reached mountaintop, but trick is staying there”

Here’s my answer to this question. The answer is no. What happened in the ACC this year was a perfect storm of great coaching, excellent play at the QB position, and the icing on the cake of a national title. Yes the build to 2016 was gradual and unmistakable. We’ve been writing about it for years, but it’s not sustainable.

What the SEC accomplished from 2006-2012 with 7 straight national titles will never happen again. The 4-team playoff forces teams 2 play two games against great teams to win a national title. Even the great Alabama who have been in all 3 playoffs have only managed to win 1 title.

There are too many good teams and coaches across the country to think that any one conference will go on an extended period of dominance. I think you’ll see yearly flip-flopping from the ACC, SEC, Big 10, and Pac 12 on who will be that year’s best conference. At some point Texas will be great again, and the Big 12 can be included with the other 4, but not at the moment.

That said the ACC is extremely well positioned for the future. Clemson and Florida State will be perennial playoff threats under Dabo Swinney and Jimbo Fisher. Virginia Tech, Miami, Louisville appear to be rising, and schools like Georgia Tech, UNC, and Pittsburgh are capable of a big season in any given year.

The ACC doesn’t have to stay on top of college football each year. The ACC Football brand has been re-built over the last 4 years. It’s a good football league and I will tell you in a future article how this season will benefit the ACC in future years. Times have changed in college football. The SEC won’t stay down they’ll be back, but they won’t dominate…. nobody will. Those days are over