Best and Worst case record for NC State football in 2016 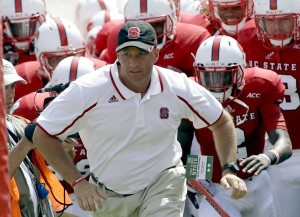 NC State
NC State is a program that’s just stuck in neutral. They aren’t good enough to be in FSU, Clemson, Louisville territory, but they aren’t bad enough to be un-competitive. Head Coach Dave Doeren has only won 6 ACC games in 3 years at NC State, and this year could tell a lot about the future trajectory of NC State football.

Will Go 8-4 (5-3) if:
NC State starts the year 5-0. William & Mary, Old Dominion, and Wake Forest should be wins. A game at East Carolina is always dangerous, but the Pirates are rebuilding. If the Wolfpack get 4-0, Notre Dame coming to Raleigh would be one of the biggest home games in recent memory for NC State. The Wolfpack still haven’t settled on a QB. Whoever it is has big shoes to fill replacing Jacoby Brissett. The offensive line has to replace 3 starters too, but Matt Dayes and Johnny Frasier could give NC State a pretty formidable backfield.

Games at Clemson, at Louisville, at UNC and hosting FSU look like at least 3 losses. If NC State beats the teams they should beat, and pull an upset along the way an 8-4 season is possible.

Will Go 5-7 (3-5) if:
The QB position struggles. Jacoby Brissett was one of the most underrated QBs in the country last year. He had a strong arm and could extend plays. With a schedule that features 5 top 20 pre-season teams, the Wolfpack will be hardpressed to win any of those games.

NC State isn’t good enough on either side of the ball to get by with a bad game from the offense or defense against most of their schedule. The Wolfpack could easily be staring at a 4 -5 record after  9 games and fighting in November to get into a bowl game.

This article was originally published at http://www.AllSportsDiscussion.com. If you are interested in sharing your website's content with SCACCHoops.com, Contact Us.
Categories: Clemson, Football, Louisville, NC State, Notre Dame, UNC, Wake Forest