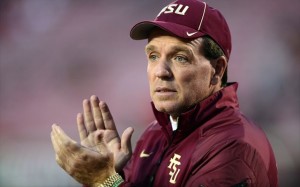 This has been a competitive series, but it’s also one that the Noles have really begun to dominate having won 7 games in a row. It’s always a big game when FSU and Miami play, but the Canes might want to think about winning one of these again.

Florida State has 6 of the last 7 in this series, and the reason I rank it behind FSU \ Miami is the Noles are winning games in this series by huge scoring margins. Florida is the back to back SEC East champs, but they haven’t been much competition for Florida State. How much longer can this go on?

When you think about the ACC”s recent dominance of the SEC don’t forget Georgia Tech has won 2 out of 3 against their arch-rival Georgia. That last 4 games have been decided by single digits. This is one of the big 4 ACC/SEC Rivalry weekend games.

Clemson heading to that atmosphere in Blacksburg? Oh these teams really need to be playing more often than they do.

The coveted labor day game goes to Georgia Tech and Tennessee this year. Last year Georgia Tech beat Vanderbilt, Georgia, and Kentucky to be the de-facto SEC East Champ. They try to add Tennessee to the list in their opening game of the year.

This article was originally published at http://www.AllSportsDiscussion.com. If you are interested in sharing your website's content with SCACCHoops.com, Contact Us.
Categories: Clemson, Florida State, Football, Georgia Tech, Miami, Virginia, Virginia Tech