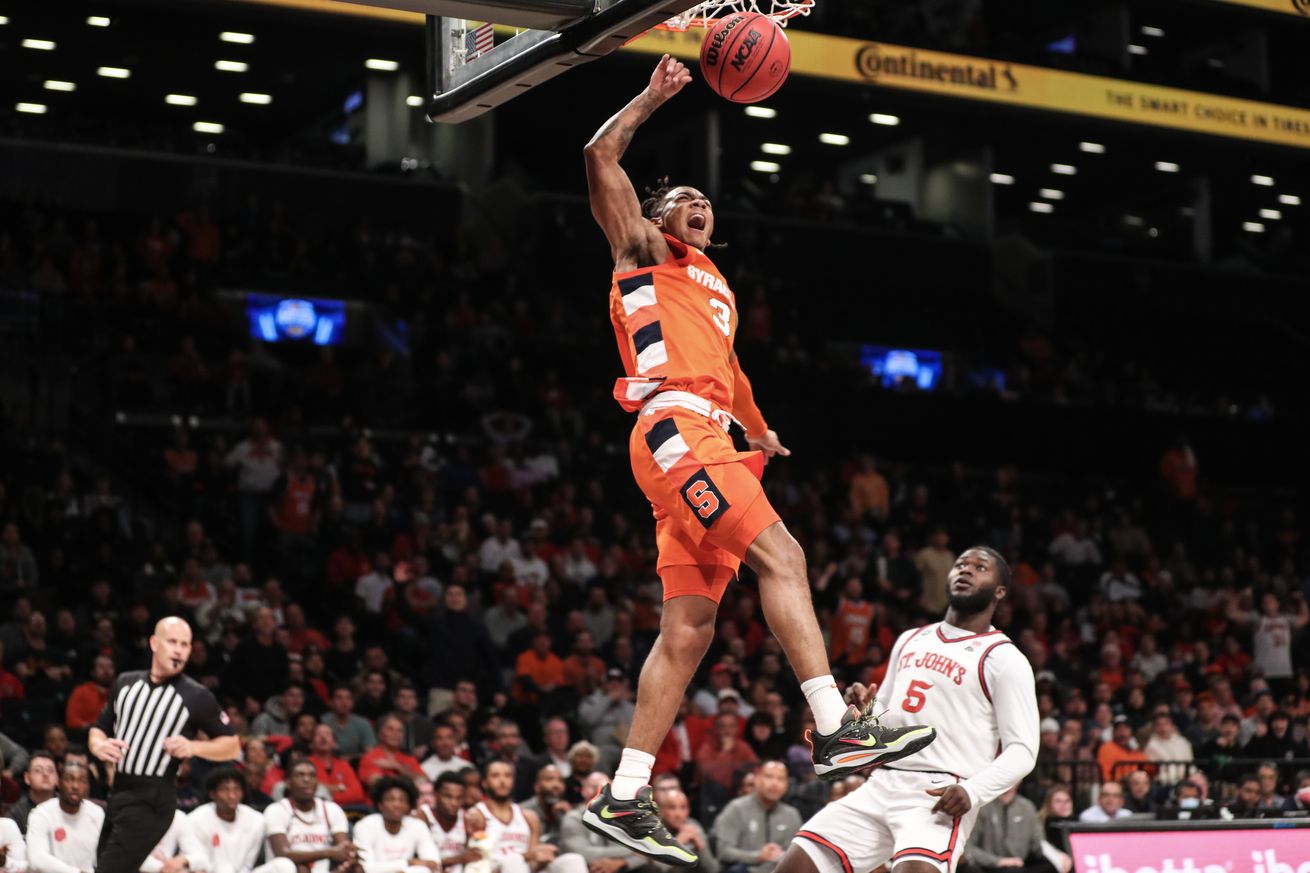 The Syracuse Orange led by 11 points at one point, but the St. John’s Red Storm picked up the physicality as the game transitioned into the second half. The Orange couldn’t keep up with the Red Storm tempo and strength in the last 20 minutes of regulation but found Jesse Edwards enough to force overtime. However, the Orange got sloppy and careless in overtime to lose 76-69.

The tempo was set early by St. John’s, who looked to use its tempo early on to throw Syracuse’s interior zone defense off balance. Judah Mintz immediately responded in kind by taking the Red Storm game plan and throwing it right back at their face. The freshman guard stayed aggressive as he drove towards the basket with no fear. Mintz paced the Orange early on with his efforts at the hoop as St. John’s put a lot of attention on Joe Girard.

The game changed early in the first half after Jesse Edwards found himself in early foul trouble for the second game in a row. As such, Mounir Hima needed to play the rest of the first half to avoid any further fouls on Edwards. However, Hima’s strong interior defense turned out to be an excellent counter to St. John’s interior attack. The transfer had six rebounds and three blocks to deny access to the paint.

But with Girard getting a lot of attention and Edwards on the bench because of his fouls, others needed to step up to provide the missing scoring. Enter Chris Bell and Benny Williams who provided 15 combined first half points. Williams in particular looked impressive as he started draining mid-range jumpers that he wasn’t hitting during his Orange career.

He came to play @Jmintz10 had 16 points in the first half to lead all scorers.

The Orange defense and Judah Mintz continued to steal the show in the first half. St. John’s turned the ball over nine times while Syracuse only committed three turnovers. That gave Mintz all the confidence he needed to continue charging the basket aggressively. Mintz had 16 first-half points on 6-13 shooting.

The second half started slow for both teams, but then the Orange offense started to stagnate. St. John’s turned up the pressure by face guarding closer. The Red Storm stayed relentless in their attack to the basket and by brute force, got baskets around Jesse Edwards. Eventually the St. John’s attack paid off as Edwards and Hima picked up four fouls by the 8:17 mark in the 2nd half.

The Orange offense couldn’t match the Red Storm output as Syracuse reverted back to stagnant ball movement and forced shots, a very similar look to the Orange’s game against Colgate. St. John’s pressure finally got to Syracuse and the physical nature of the Red Storm swung the rebound advantage away from the Orange.

What also didn’t help the Orange is the lack of other scoring outside of the paint. The Orange were only 3-15 from three in regulation. Syracuse needed perimeter scoring in order to offset the physicality advantage that St. John’s had inside and the Orange shooters could not do that.

However, Syracuse’s saving grace was Jesse Edwards. The Orange finally found the big man on offense and he responded in kind, giving Syracuse 12 second-half points. He also caused enough of a disturbance down low without fouling to deny St. John’s in the paint. The Orange couldn’t get a buzzer-beater shot to fall again as Syracuse went to overtime for the second straight night.

The overtime started sloppily for both teams. The Orange continued to struggle finding a rhythm as St. John’s pressure kept the ball from moving efficiently on the Syracuse end. Syracuse’s desperation to find an opening meant the Orange couldn’t get a clean possession. St. John’s stayed clinical and kept their heads cool as Syracuse starting throwing the ball away.

The Orange have a tune up game on Saturday against Bryant next before the Orange head towards a brutal road stretch at Illinois and Notre Dame.