In what’s shaping up as a potential bubble season for the Irish, a renewed opportunity for a major resume-building upset is huge 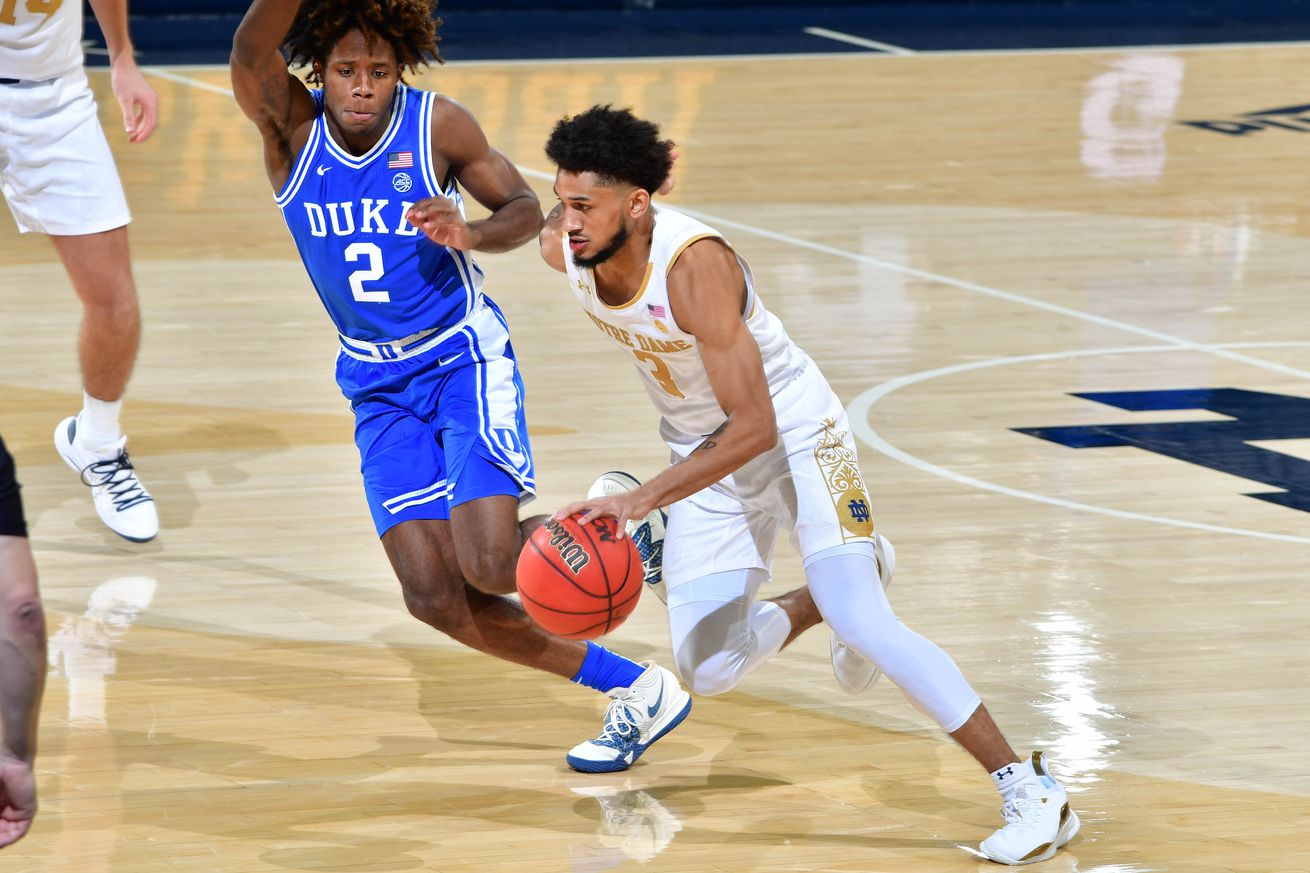 Anyone disappointed that the Notre Dame Fighting Irish men’s hoops team lost a chance for a resume-building win a little more than a week ago can rest easy, at least for now.

The Fighting Irish had their New Year’s Day home match-up against the Duke Blue Devils postponed a couple weeks back due to the Duke team’s struggles with various team members’ exposure to COVID at the time, and until now it was unclear if/when the game might happen this season.

Notre Dame announced this afternoon that the game has officially been rescheduled, with the Irish set to host the currently 8th-ranked Blue Devils on Monday, January 31st at 7pm ET at Purcell Pavilion.

Our New Year's Day game vs. Duke has been for the end of the month.

That rescheduling makes for a tough little stretch of basketball for the Irish, as they will host the Virginia Cavaliers on Saturday, January 29th, face the Blue Devils two nights later, and then hit the road for away games at the Miami Hurricanes (Wednesday, February 2nd) and NC State Wolfpack (Saturday, February 5th).

That means games against three teams currently in the top-7 of the ACC standings in a five-day span, and then another road game added on top of it to round out four games in seven days.

The Irish (9-5, 3-1 ACC) have been on a nice run of late, winning 5 games in a row and 6 of their last 7, including victories over Kentucky and North Carolina. It’s still very early in conference play, but the Irish have managed to claw their way to 3rd place in the ACC standings.

However, considering it’s quite a down year for the conference (Duke is the only ACC team currently ranked in the AP Top 25), the Irish will be desperate to add big wins to their resume down the stretch this year after a rough showing in their non-conference slate and with so few big opportunities on the horizon in conference play. January 31st is going to be an important game for a team that realistically will probably, at best, find themselves on the bubble heading into the ACC Tournament.

The Blue Devils, of course, would be a feather in the cap of the Fighting Irish’s 2021-2022 resume and help considerably in building an NCAA Tournament case for ND. In the final ride of the program under Coach K, Duke is currently 12-2 overall and boasts their typical array of elite talent, headlined this season by surefire lottery pick Paolo Banchero, a 6’10” freshman forward averaging 17.3 points and 7.5 rebounds on the year.

It’s a major stretch to think the Irish will be able to pull off an upset over a team like Duke, but considering the way the team has played of late behind the performances of freshman stud Blake Wesley, steady senior Dane Goodwin, and others, who knows what Brey and the boys may be able to muster in a huge home game in late January?

This article was originally published at http://OneFootDown.com (an SB Nation blog). If you are interested in sharing your website's content with SCACCHoops.com, Contact Us.
Categories: Basketball, Duke, Notre Dame