Pitt and Syracuse met for the second time this season at the Petersen Events Center on Tuesday night, and after a 77-61 loss at the Carrier Dome on Jan. 11, the Panthers had vengeance on their minds. And despite a slow start, they would surge in the second half to knock off the Orange 64-53. 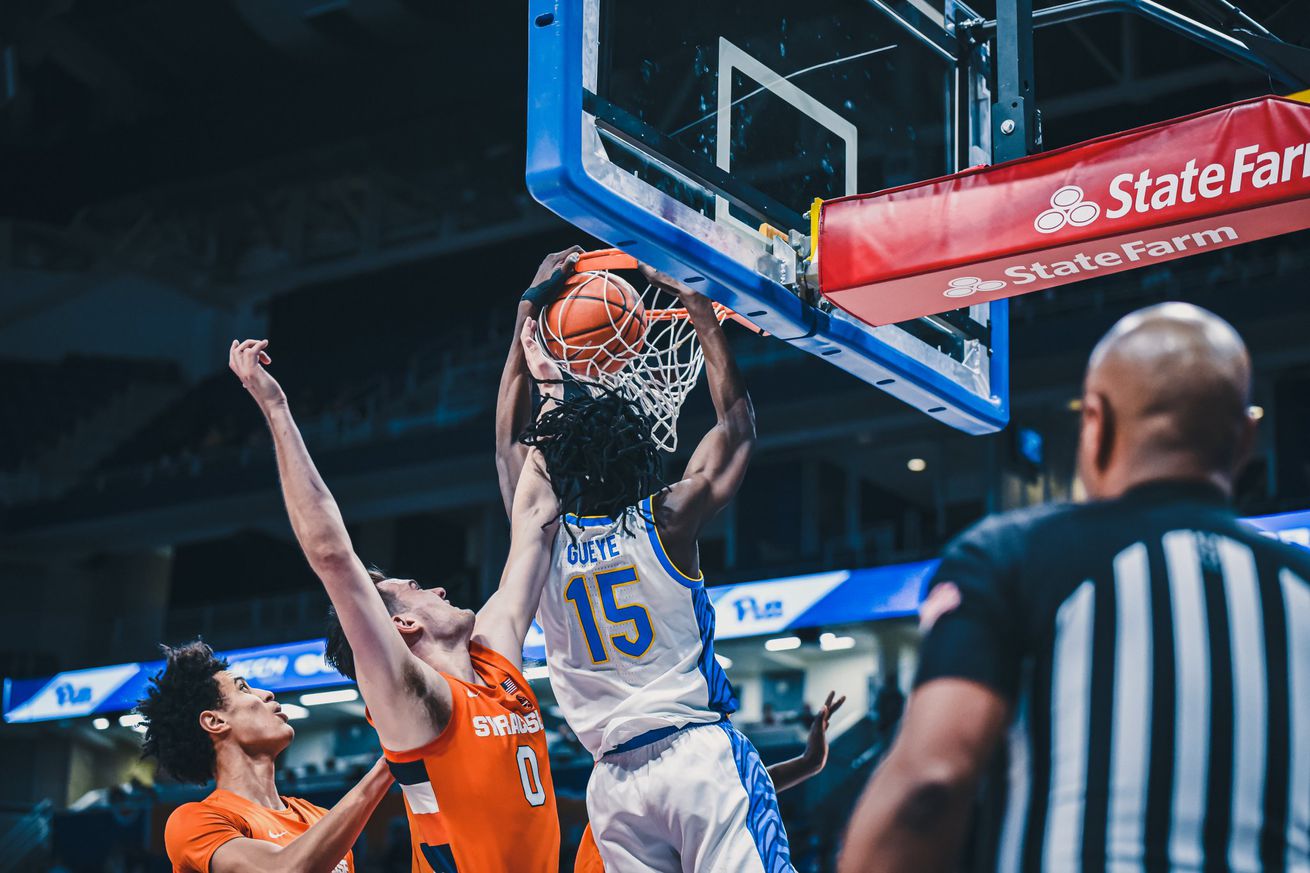 Neither team looked especially inspiring early in the game, as Pitt and Syracuse exchanged missed shots to kick things off. However, Cole Swider got the ball rolling with a triple, and Onye Ezeakudo answered with a three of his own to tie the game early. But from there, the Pitt offense would stagnate, and Syracuse would go on a 10-1 run to make it 13-4.

That slow start by the Panthers was the result of a 1-for-14 performance from the field, which was eventually interrupted by Mouhamadou Gueye, who came up with a dunk and a jumper in back-to-back possessions to cut the Orange lead down to 13-8. From that point on, Pitt would continue to fight as Syracuse took its foot off the gas, and eight minutes later, the Panthers would trail the Orange 21-20.

Pitt and Syracuse would then battle to the halftime buzzer, with both teams making multiple trips to the foul line. And once the last few seconds had ticked off the clock in the opening half, the Orange led but the Panthers were alive, with the score 28-24.

In the second half, the Panthers continued to chip away at the Orange’s lead. Once again, it would be Ezeakudo who got the ball rolling for Pitt with a three-pointer to make it 30-27. Gueye would again slam home an emphatic dunk to build on Ezeakudo’s contribution, and back-to-back threes by Jamarius Burton would pull the Panthers within two points of the Orange, making it 37-35. Another Gueye dunk would tie it up at 37-37, and moments later, Pitt would have its first lead of the game on a layup through contact by Femi Odukale, which made the score 41-40 at the 12:53 mark.

What happened next stood in stark contrast to Pitt games of the recent past, as the Panthers dug in and padded their lead while keeping the Orange at bay. Burton hit a three to make it 44-40, and Gueye followed with one of his own to make it 47-40. Buddy Boeheim would end that run with a pair of made free throws, but Pitt would not relent. Ezeakudo would hit another three to make it 52-45 at the 8:02 mark, and a Burton steal and breakaway dunk would make it 54-46 just over a minute later. And with 3:42 left to play, Hugley would hit a mid-range jumper to make it 56-46 and give the Panthers their largest lead of the night.

The Panthers would ride out the last few minutes of the game and keep the Orange at arm’s length to win 64-53, having outscored them 40-25 in the second half. Burton would finish as Pitt’s top scorer, with 21 points, while Gueye and Hugley both posted double-doubles in the game. Gueye had 19 points and 10 rebounds, while Hugley had 11 points and a career-high 18 rebounds. And Ezeakudo also posted a career high, as he came up with 11 points in the upset of Syracuse.

With the win, Pitt improved to 8-12 on the season and 3-6 in ACC play. Meanwhile, Syracuse dropped to 9-11 overall and 3-6 in conference play. Pitt will have a chance to build on its momentum this weekend, when the team heads to Chestnut Hill to take on Boston College. In that Saturday afternoon matchup, the Panthers will have a shot at a regular-season sweep of the Eagles. That game is set to get underway at 4 p.m.

This article was originally published at http://cardiachill.com (an SB Nation blog). If you are interested in sharing your website's content with SCACCHoops.com, Contact Us.
Categories: Basketball, Pittsburgh, Recap, Syracuse, Video