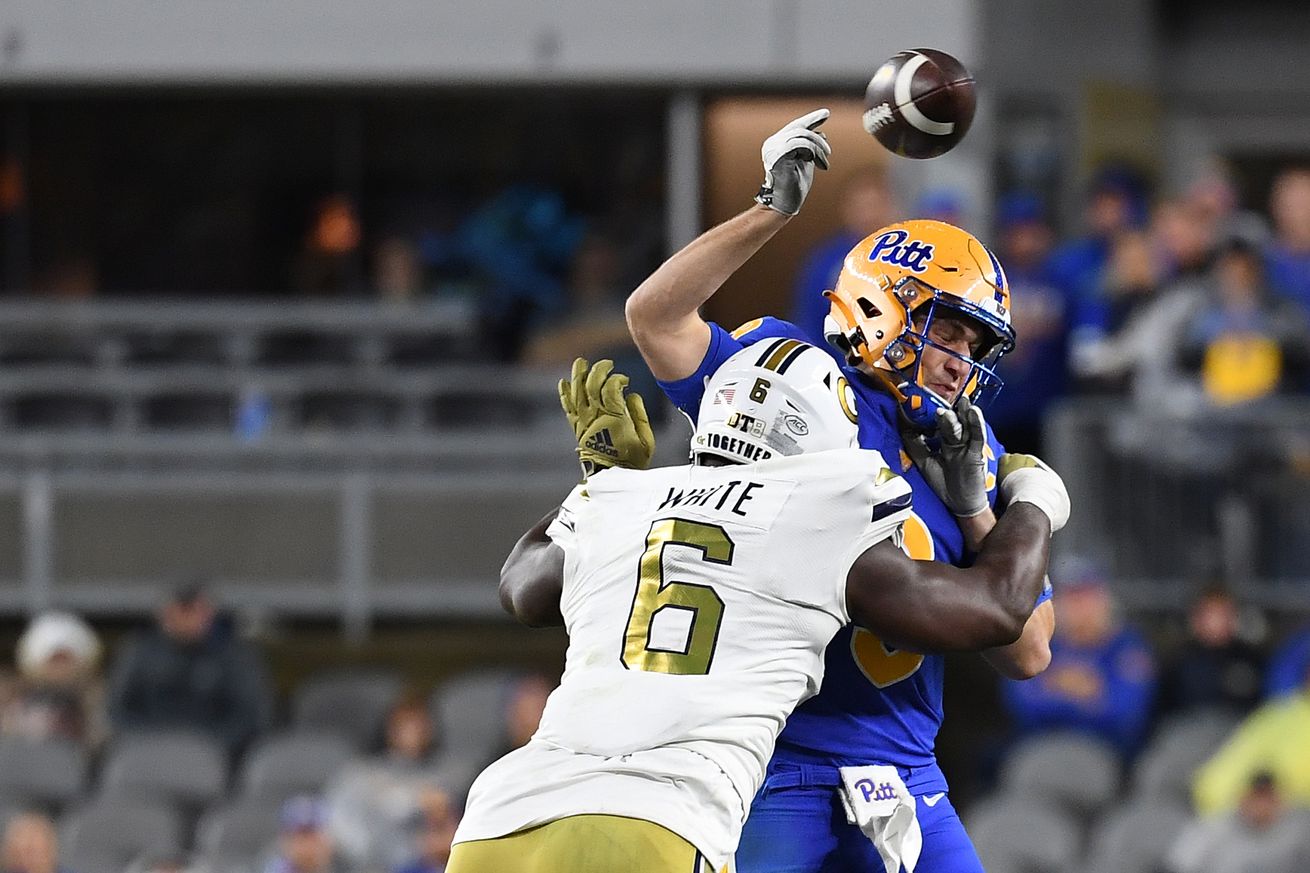 The Pittsburgh Panthers were shocked at home by the Georgia Tech Yellow Jackets 26-21.

This was an ugly game for the offense all night long going against a team that on paper was a good matchup. Kedon Slovis often looked slow in his reads and Georgia Tech was able to rally to the football with Pitt opting not to attempt to stretch the defense at all. The running game was never truly established against a team that had been gashed by the run all year long. The box score will look kinder to Slovis as he was able to get stats up in the final two drives of the game with Georgia Tech in a shell coverage.

The Pittsburgh offense shots themselves in the foot with multiple turnovers in the second half. Kedon Slovis threw one interception and there were two fumbles lost by Vincent Davis. Penalties were also a major issue for the Panthers getting flagged 12 times for 75 yards.

David Green, Israel Abanikanda, and Konata Mumpfield all left the game with injuries at various points.

Pittsburgh’s offense got off to a slow start in the first half. Kedon Slovis couldn’t establish a rhythm until the final drive of the first half. Pitt only managed 5 yards in the first quarter and Slovis looked slow and indecisive with the football. Vincent Davis helped spark the second-quarter offense but overall the team only managed 49 yards of offense until the final drive. Pitt’s offense got into a rhythm and executed an 8-play, 75-yard touchdown drive capped off by a 29-yard touchdown pass to Gavin Bartholomew. Defensively after giving up an opening drive field goal Pitt clamped down only giving up one other field goal. Georgia Tech quarterback Jeff Sims was under constant pressure and came away with 4 sacks. I counted about 5 possible plays that could have been turnovers that just didn’t go Pitt’s way, mainly dropped interceptions. Georgia Tech only managed 100 yards on offense and somehow had a worse passing offense than Pitt.

Kedon Slovis was 26/45 for 305 yards with three touchdown and one interception. Most of these stats came with less then four minutes to go in the fourth quarter.

With Israel Abanikanda leaving the game early with an injury, Vincent Davis rushed the ball 15 times for 80 yards with two fumbles lost.

Jared Wayne was the teams leading receiver. Mumpfield had six catches for 89 yards.

This will make things look better than it actually was pic.twitter.com/ZJj16YFlXW

Pittsburgh drops to 3-2 on the season and 0-1 in ACC play. Pittsburgh will look to bounce back in another Coastal game against Virginia Tech. The Hokies are coming off a blowout loss to North Carolina 41-10.

This article was originally published at http://cardiachill.com (an SB Nation blog). If you are interested in sharing your website's content with SCACCHoops.com, Contact Us.
Categories: Football, Georgia Tech, Pittsburgh, Recap, Video