Kenny Pickett led Pitt with 203 yards and two scores, while Israel Abanikanda chipped in 140 yards on the ground 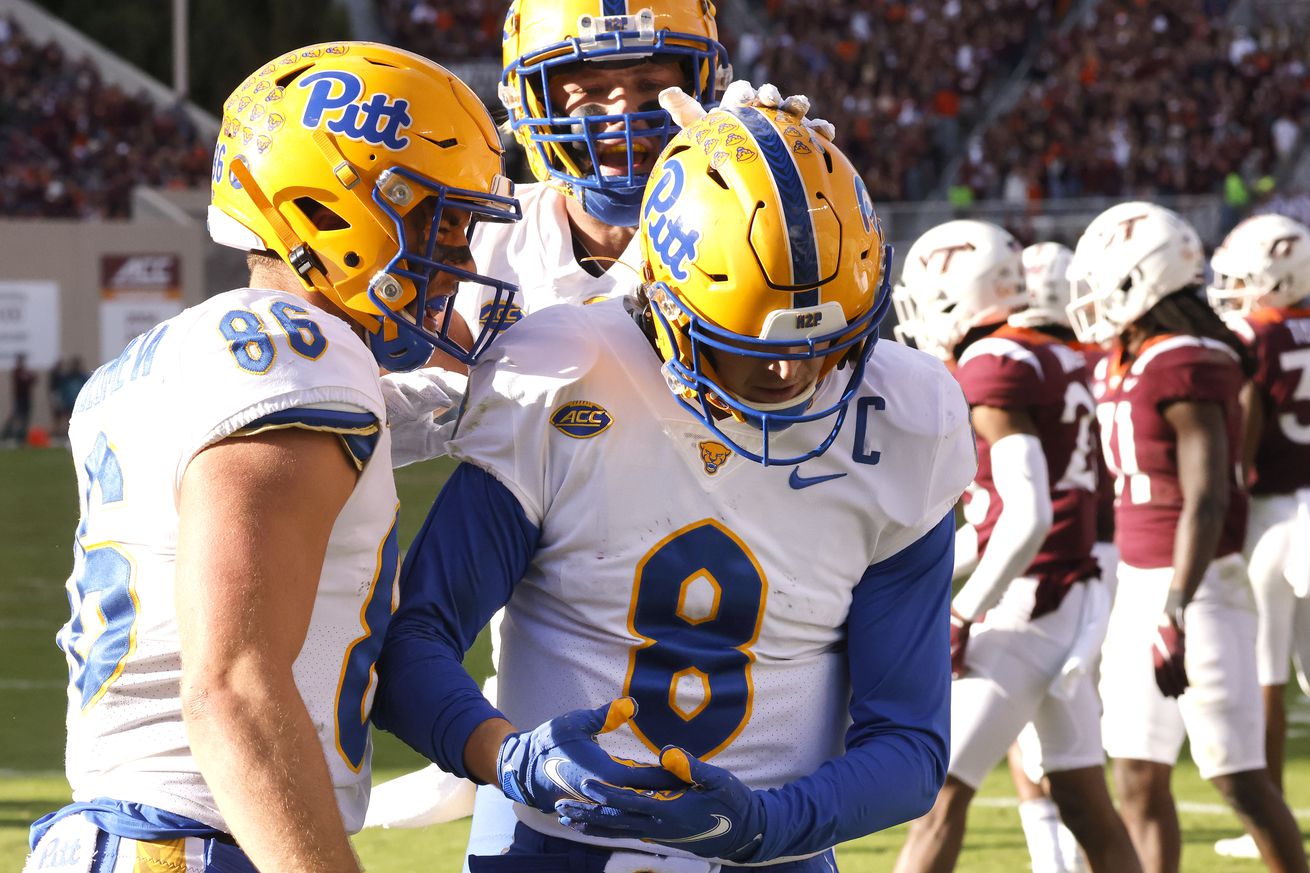 Pitt and Virginia Tech met at Lane Stadium on a blustery day in Blacksburg, and although a close matchup between the rivals was expected, the Panthers defied expectations by blowing out the Hokies 28-7 on their home field and improving to 5-1 on the season.

After an exchange of stalled drives to start the game, Pitt drew first blood, as Panthers quarterback Kenny Pickett led the team down the field on its second drive of the day and capped off a 94-yard trek with an eight-yard play-action pass to Panthers tight end Gavin Bartholomew. Bartholomew would ramble into the end zone past Hokies defensive back Nasir Peoples for the first touchdown of his career, and that would put Pitt up 7-0.

The wind would become more of a factor after that, as it blew down passes by Hokies quarterback Braxton Burmeister and played havoc with punts. As a result, the usual fireworks from the Pitt offense would have to wait until the second quarter. But after a pick by Panthers defensive back Erick Hallett, Pitt would be set up for its second scoring drive.

That drive, which was Pitt’s seventh of the day, got off to a slow start, as Panthers offensive coordinator Mark Whipple drew up two ineffectual runs for Vincent Davis. But with nothing coming of those two efforts, Whipple then put the ball back in Pickett’s hands.

That proved to be the right call, as Pickett threw a perfectly placed 28-yard pass to Panthers receiver Jared Wayne, who he found streaking down the sideline. Wayne would haul in the ball despite a challenge from Hokies defensive back Jermaine Waller, and on the next play, Pickett would fake a handoff to Panthers running back Israel Abanikanda and run it in himself for a three-yard score. That would give Pitt a 14-0 advantage, and the team would continue to build on that.

On its next drive, Pitt would dip into the same bag of tricks that worked the last time around, and after a 17-yard run by Abanikanda forced the Hokies to respect the run, Pickett again found Wayne streaking down the sideline. This time, Pickett and Wayne connected on a wheel route, and the 36-yard pass would end in a touchdown, putting Pitt up 21-0.

Both Pitt and Virginia Tech would get the ball again in the first half, but sacks of Burmeister by Panthers linebacker Cam Bright and Panthers lineman Calijah Kancey would end the Hokies’ last two drives, and the score would remain 21-0 at the halftime break.

After the break, Pitt would capitalize on good field position and score on its first second-half drive. The drive would feature a balanced attack, with Pickett and Panthers running back Vincent Davis both toting the ball multiple times and Pickett completing passes of nine or more yards to Wayne and Panthers receiver Taysir Mack. And after a pass interference call on Hokies defensive back Armani Chapman set Pitt up with a 1st-and-goal on the Hokies’ five-yard line, Davis would cap off the drive with a five-yard run to give Pitt a 28-0 lead.

Virginia Tech would finally respond on the following drive, as Burmeister connected with Hokies receiver Tre Turner on a 47-yard pass. Three plays later, the Hokies would find themselves in the Pitt red zone, and they would not look back, as Burmeister found Tayvion Robinson in the end zone to give the home team its first score of the day, making it 28-7.

However, after a hot start to the half for both teams, things would quiet down, with neither team able to mount another scoring drive in the third quarter. That trend would hold up in the fourth quarter, with Pitt content to kill the clock, and with Pitt spending more than 11 minutes putting together a drive that sputtered out at the Hokies’ 16-yard line, the game would be out of reach when Virginia Tech reclaimed the ball, and Pitt would win by a score of 28-7.

Pickett was once again the star of the game for Pitt, as he led the way with 203 yards and two touchdowns on a 22-for-37 passing performance. And once again, he played a largely mistake-free game, as he threw zero interceptions for the third straight game. However, Pickett was aided by standout performances by Wayne, who caught six balls for 94 yards and one score, and Abanikanda, who ran the ball 21 times for 140 yards and was instrumental in Pitt’s final push to kill the clock and escape Blacksburg with a victory.

With the win, Pitt improved to 5-1 overall and 2-0 in conference, while Virginia Tech fell to 3-3 overall and 1-1 in conference. Pitt now sits atop the ACC’s Coastal Division as the only team in the division with zero conference losses. Pitt’s next challenge will be a matchup with Clemson at Heinz Field, and Clemson will come to town as a shell of its former self.

Clemson has already recorded losses to Georgia and NC State and more recently logged narrow wins over Boston College and Syracuse, both of which were decided by less than a touchdown and saw the Tigers fail to score 20 points. Those struggles could spell opportunity for Pitt, as the Panthers boast one of the nation’s top offenses and could outpace the Tigers if they can find a way to best of what has still been a stout Clemson defense.

This article was originally published at http://cardiachill.com (an SB Nation blog). If you are interested in sharing your website's content with SCACCHoops.com, Contact Us.
Categories: Football, Pittsburgh, Recap, Virginia Tech