Needed it. Got it. 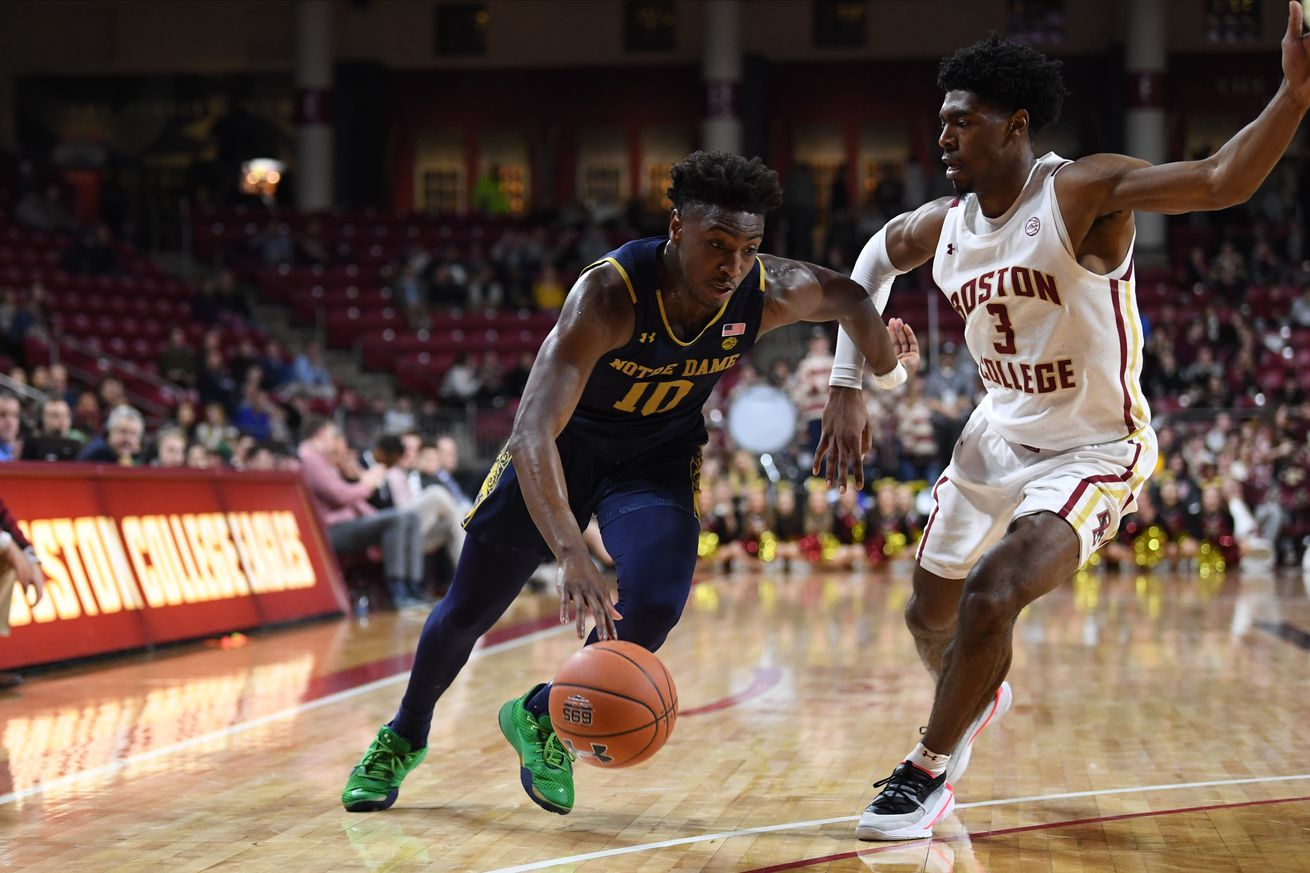 The Notre Dame Fighting Irish men’s basketball team traveled to Boston tonight to face the Boston College Eagles at the Conte Forum. This was the second time that the Irish and the Eagles have met this season. In the first match-up, Boston College snapped Notre Dame’s 13-game win streak in the series with a 73-72 victory at Purcell Pavilion on December 7, 2019. Notre Dame is 12-1 against Boston College in ACC play, 23-11 in the all-time series, and 8-6 at Conte Forum. Here’s how the match-up looked tonight.

Notre Dame came out and scored the first basket, on a Juwan Durham dunk, but Boston College quickly responded with a three and a lead of their own. Juwan Durham scored again with yet with a jumper, and the Irish were back up 4-3. BC responded with yet another three, and went up 6-4. Boston College’s Derryck Thornton made a jumper to go up 8-4, followed by a Prentiss Hubb layup, and the Irish were within two. Boston College’s Jared Hamilton made a layup to go up by four (10-6), and it was time for a break. Timeout 15:57.

Coming out of the timeout, Boston College scored yet again, off to a very efficient start. The Irish went to their end of the court and John Mooney sunk his first three of the game, 12-9 BC. And then on a quick turnover Mooney got the ball back and scored on a dunk. Notre Dame got the ball back again, and this time Hubb sunk his first three-point shot of the night. Notre Dame scored two more points on a Mooney layup before the Eagles would finally get points on the board on a Thornton three-point shot. 16-15 Irish.

The two teams continued to trade points back and forth, and with 9:51 left in the half, the two teams were tied at 20. Rex Pflueger tried to sink a three point shot and missed, and the Eagles took the ball down court and Steffon Mitchell made his layup. The Eagles got the ball back from the Irish on their next possession, and CJ Felder made his layup. 24-20 BC. Following the media timeout, Nate Laszewski headed to the line and sunk both of his free throw shots to bring the Irish to within two points, 24-22 BC.

Boston College answered with a quick three-point shot by Julan Rishwain. Gibbs tried to answer and missed, and then Durham tried for a reverse layup and didn’t get the points but drew the foul. Durham made one of his two shots from the line, and BC was still up by four points. 27-23 BC. The Irish then made two scores in a row, a layup and a dunk, both by Mooney, and the game was tied at 27. The Eagles then responded with a three-point shot by Rishwain, followed by another BC score by Thornton who also drew the foul and made it a three point play. 33-27 BC.

Pflueger missed his layup on the next Irish possession and BC grabbed the rebound. On their next possession, Thornton made another layup, at whichpoint there was a media time. 35-27 BC, with 3:37 on the clock. After the break Laszewski fouled Jared Hamiton who made both of his shots from the free throw line, and BC was now up by 10 points. Gibbs tried for a shot from the baseline and couldn’t sink it, but Mooney was right there to tip it in. Boston College responded with a jumper by Luka Kralijevic.

John Mooney got fouled by BC’s Steffon Mitchell, and at the line Mooney made both of his shots, 39-31 BC. BC responded with a layup by Jay Health, and it was a ten point game again. With 53.2 seconds left in the half, Mike Brey called a timeout to refocus his men. Following the timeout, the Irish finished the half in style on a beautiful three-point shot by Rex Pflueger.

The Irish were the first to get points on the board in the second half, on a Rex Pflueger layup. Juwan Durham drew the first foul of the half, and BC’s Steffon Mitchell made one of his two shots from the line. Notre Dame’s Hubb turned over the ball and Mitchell responded with a three. Durham made his layup on Notre Dame’s next trip down court, and Brey decided it was time for a quick timeout. 45-38 BC, 17:56 remaining.

After the timeout Gibbs gets the rebound and got the ball to Hubb for a three point bucket, and the Irish were only down by four, 45-41 BC. Gibbs stole the ball on the next Eagle possession, and Mooney makes a beautiful shot off the glass. Two point game, 45-43. Boston College turned the ball over yet again, and Mooney tried for the three but was too strong, and BC got the ball back. BC tried for a three and missed, but snagged the rebound and Kraljevic sunk a layup.

Laszewski decided to get in on the second half scoring, sinking a three, and the Irish were only down by one point, 47-46. Media timeout, 14:27 remaining. BC’s Health made a three point shot, and BC went up by four points. Both teams struggled to get points on the board or keep control of the ball with multiple turnovers by both teams. Finally Dane Goodwin gets fouled and headed to the line where he made one shot. BC got the rebounded and headed down court to make a three point shot. 53-47 BC.

Mooney got the rebound and the layup, which was quickly responded to by BC and a layup by Heath. 55-49. On the next Irish possession, Mooney tried for a three and missed, and BC got the rebound but couldn’t convert to points. The Irish took the ball down court and Laszewski made a three. It’s now a three-point game, 55-52 BC. Timeout with 7:27 remaining. Laszewski made his next layup, and it was now a one point game. On BC’s next possession, Kraljevic snuck in a basket from underneath and it’s a three point game. How many times can the Irish take these games down to the wire?

Mooney got fouled by Kraljevic, and headed to the line where he sunk one, 57-55 BC. On the next BC possession they turnover the ball, and Hubb made a quick three. Irish up by one, 58-57. Boston College timeout with 3:42 remaining in the game. After the timeout BC’s Thornton scored a quick jumper, and the lead changed to BC up by one. On the next ND possession, Mooney tried for a jumper and missed, but got the rebound, and then Thornton was fouled. After a ND turnover, followed by a BC turnover, Notre Dame took a timeout. 2:11 remaining in the game.

With less than two minutes remaining, Hubb was driving to the basket and lost his footing and got called for traveling. On the next BC possession, ND got the rebound and headed down court where Gibbs made a quick layup. BC turned over the ball again, and as the seconds run off the clock Gibbs tried to make a shot and missed, and Boston College got the rebound. 60-59 Irish, 20.3 seconds left, and BC called a timeout.

Next up, Notre Dame travels to take on the Wake Forest Demon Deacons on Saturday, February 29th, at 5pm ET.

This article was originally published at http://OneFootDown.com (an SB Nation blog). If you are interested in sharing your website's content with SCACCHoops.com, Contact Us.
Categories: Basketball, Boston College, Notre Dame, Recap, Video