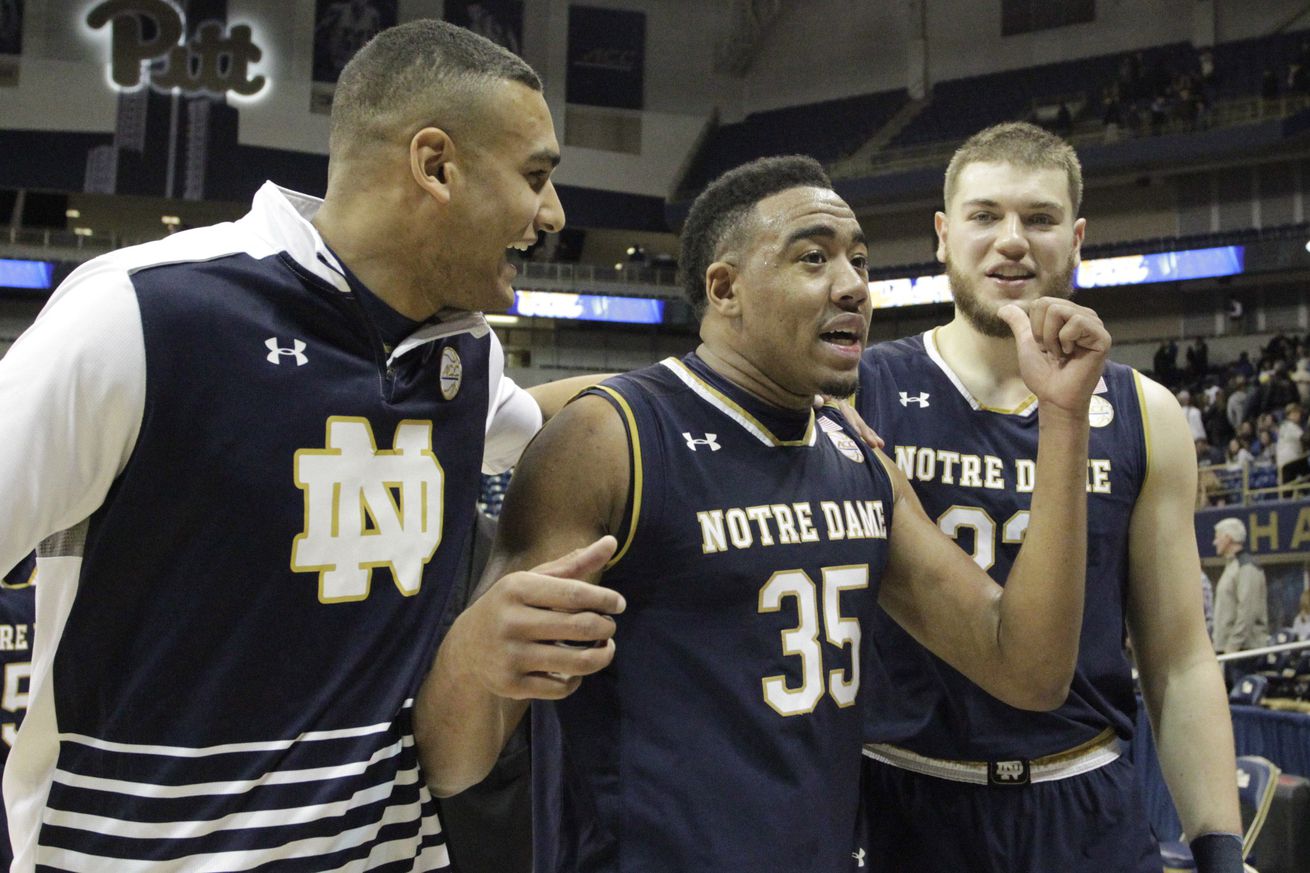 After storming out of the gates to start the 2016-17 season, the Irish entered this past week looking to rebound from a tough loss to Purdue at the hands of a second half collapse, followed by an unimpressive home win against an inferior Colgate squad. Mike Brey and his team had a home match against St. Peters to right the ship before entering the mine field that is ACC play.

Their tune-up against the Peacocks proved to be anything but reassuring, aside from V.J. Beachem coming alive for 18 points. The senior came into the season as the expected focal point of the perimeter attack on offense, yet has experienced an up-and-down season thus far. The Irish were outscored in the second half for the fifth straight game, yet managed to hold on for a 63-55 victory, despite turning the ball over 14 times, the second straight game they reached that undesirable mark.

On Saturday, the Irish opened up conference play and closed out 2016 with an instant classic, relying on two clutch three-pointers from senior Steve Vasturia to defeat Pittsburgh in overtime in their first true road game of the season. Thanks to Vasturia’s heroics against a solid Panthers’ team, the Irish were able to move up on spot in the AP rankings, and currently sit at 23rd in the nation.

The week ahead will continue to be a tough test for the Irish, as they take on ninth ranked Louisville on Wednesday and Clemson on Saturday, both home games. The Irish are capable of beating both teams in front of their home crowd, but certain areas have to be addressed to make this a successful weekend.

Two weeks ago, it would have been considered laughable that we would soon be talking about the Irish and their need to improve their ball control. After all, the team was leading the nation in turnover percentage entering last week. However, as mentioned earlier, the Irish committed 14 turnovers in two straight games, and ended the first half in Pittsburgh with eight turnovers. For the Irish to stay in the top half of the ACC, they need to get back to securing the ball and limiting the mistakes on the offensive end.

V.J. Beachem led the Irish to victory against St Peters, but was once again cold from the floor against Pittsburgh, shooting 3-10 from the field and 0-5 from beyond the arc. The offense is a much more potent weapon when Beachem is on top of his game, drawing defenders out from the paint to open up space for Bonzie Colson or Martinas Geben at the rim. Beachem was projected to be one of the top offensive forces in the ACC this season, and Wednesday would be the perfect timing for the senior to find some consistency.

On the positive side, the Irish have been getting quality minutes from Geben and T.J. Gibbs, who have provided sparks of the bench when not in a starting role. Speaking of the starting lineup, guards Matt Farrell and Vasturia were pleasures to watch against Pittsburgh. Vasturia bounced back from an offensive drought and found his stroke against Pittsburgh, and will be an important factor on Wednesday against a stout Louisville defense. Farrell simply needs to stay the course and continue to be an excellent facilitator while continuing to not be afraid to shoot the deep ball.

Louisville is a top-tier rebounding team, 11th in the nation on the glass. If the Irish can follow their three-point shots and rely on Colson and Geben to battle down low, they could certainly give the Cardinals a tough time. It should be another exciting ACC matchup in South Bend on Wednesday.

The road victory to open up ACC play made the week an overall success for the Irish, but they still have plenty of work to do to make this upcoming week a successful one.

This article was originally published at http://OneFootDown.com (an SB Nation blog). If you are interested in sharing your website's content with SCACCHoops.com, Contact Us.
Categories: Clemson, Louisville, Pittsburgh