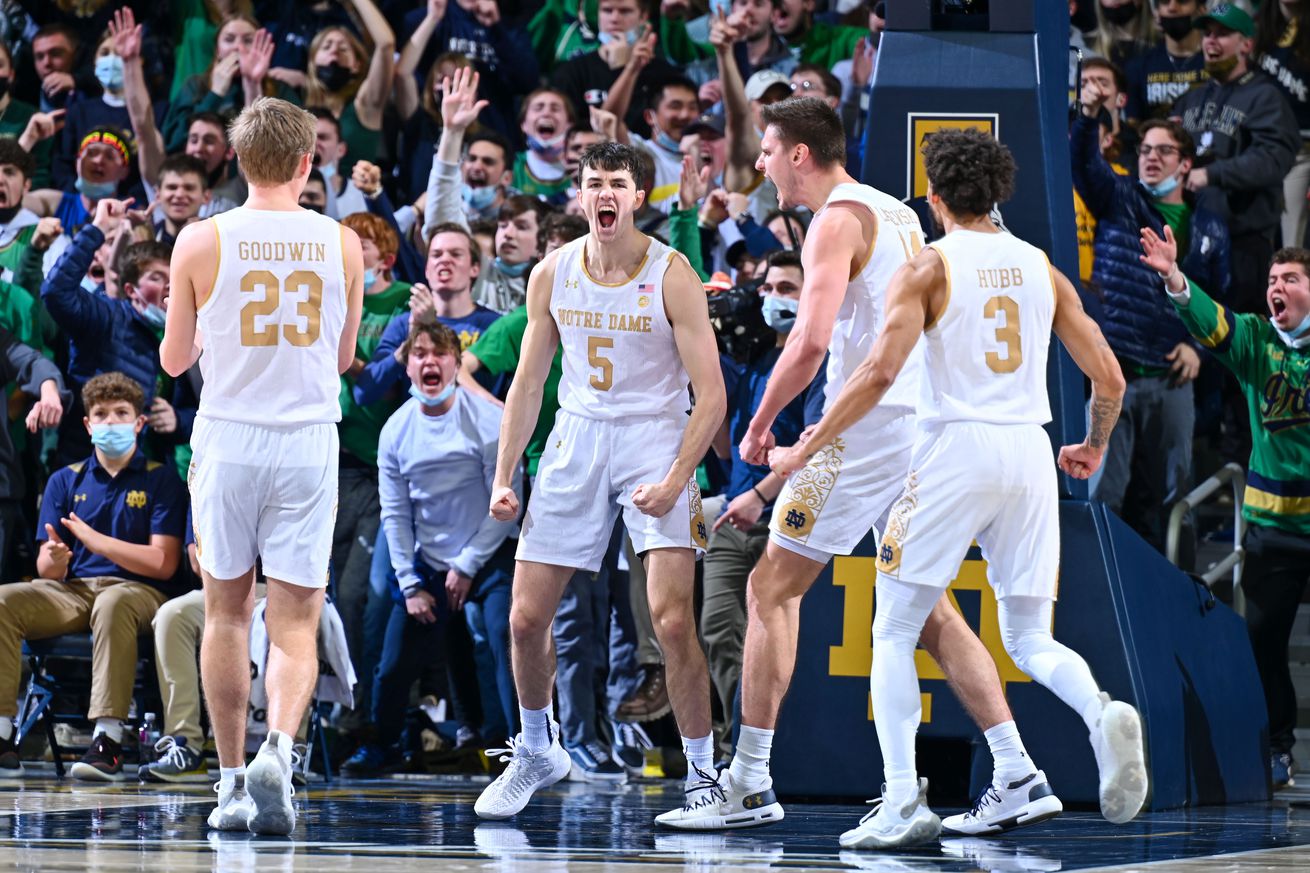 The Notre Dame Fighting Irish men’s basketball team topped the NC State Wolfpack this evening, winning a fairly ugly game by a final score of 73 to 65 in a match-up at Purcell Pavilion.

The Irish were led on the evening by Nate Laszewski, who scored 18 points on 4-of-5 three-point shooting and pulled down 11 rebounds for good measure. Dane Goodwin (17 points, 8 rebounds), Blake Wesley (15 points, 6 rebounds, and 4 assists despite 3-for-16 shooting), and Prentiss Hubb (11 points, 5 assists, 0 turnovers) also made solid contributions to the overall Notre Dame performance, as the team shot 38.6% from the field and 39.3% from long range.

The Wolfpack were paced in scoring on the night by Dereon Seabron (21 points, 8 rebounds), while Jericole Hellems (14 points), Casey Morsell (10 points, 8 rebounds), and Cam Hayes (10 points) chipped in as well. NC State shot 42.6% from the floor overall and 31.6% from long range while losing both the rebounding and turnover battles by narrow margins.

The game began pretty evenly, as the two teams traded baskets early on despite doing so in different ways — the Wolfpack did all their initial scoring in the paint, much of it on second-chances, while the Irish were a little more balanced between jumpers and shots at the rim.

As the half progressed, it became clear that neither team came to shoot particularly well. An ugly half with sloppy play and lots of missed shots ended in a 30-30 tie at the intermission, with the teams combining to shoot 8-for-29 from three-point range while neither could top 38% shooting overall from the field in that first period.

In the second half, the Wolfpack quickly leapt out to a 35-30 lead, forcing Mike Brey to call a timeout and quickly try to inspire his troops to respond. Whatever he said worked with Laszewski, who went on a personal 8-0 run to fire up his team and the student section alike.

After a Cormac Ryan drawn charge kept the momentum going, Wesley found a cutting Goodwin for a bucket, Laszewski swatted an NC State shot, and then Laszewski buried yet another three on the other end to make it a 13-0 run by the Irish and give them a 43-35 lead.

The Irish’s unanswered run would end at 15 straight points after a Wolfpack bucket finally broke them out of their drought, but two Blake Wesley free throws (on the 4th foul by Jericole Hellems, who was forced to head to the bench for a while) pushed the ND lead back to double digits with a little over 13 minutes to play.

From there, NC State did a decent job chipping away at the deficit over the next few minutes of play without Hellems on the floor, getting within 3 at the 10-minute mark. However, a Goodwin offensive rebound that eventually led to him draining a three shifted all the momentum. Wesley followed that with a steal and breakaway layup, and then Ryan drained a couple free throws to put the Irish back up 10 with 9 minutes remaining.

The Irish defense came alive in the middle portion of the second half, forcing 4 turnovers in a span of about 4 minutes and really making it difficult on NC State to move the ball and get clean looks. Still, the Wolfpack hung around, pressuring the Irish in the backcourt to force a couple turnovers and managing to chip away again at the lead, making it 63-58 at the 2:37 mark.

The Irish refused to let the Wolfpack get any closer than that, though, and after a huge steal by Cormac Ryan at the 1:24 mark and then a corner three from Goodwin with 55 seconds left to push the Irish lead back up to 9, Notre Dame was able to mostly coast to their 8-point victory amidst a few garbage-time layups by NC State.

With the win, the Irish improved to 13-6 overall and 6-2 in ACC play on the season, having now won 9 of their last 10, as well as 10 of their last 12 since being blown out by Boston College in December. They also improved to 8-0 at home this season.

They’re scheduled to play next on Saturday evening at 6 pm ET, when they will host the Virginia Cavaliers at Purcell Pavilion.

This article was originally published at http://OneFootDown.com (an SB Nation blog). If you are interested in sharing your website's content with SCACCHoops.com, Contact Us.
Categories: Basketball, NC State, Notre Dame, Recap, Video