Pitt’s offense wasn’t running on all cylinders today but behind some early field goals, timely touchdown passes, and maybe a little defense, the Panthers hung on for a thrilling 23-20 win against Louisville. Pitt remains perfect at 3-0 while Louisville falls to 1-2. 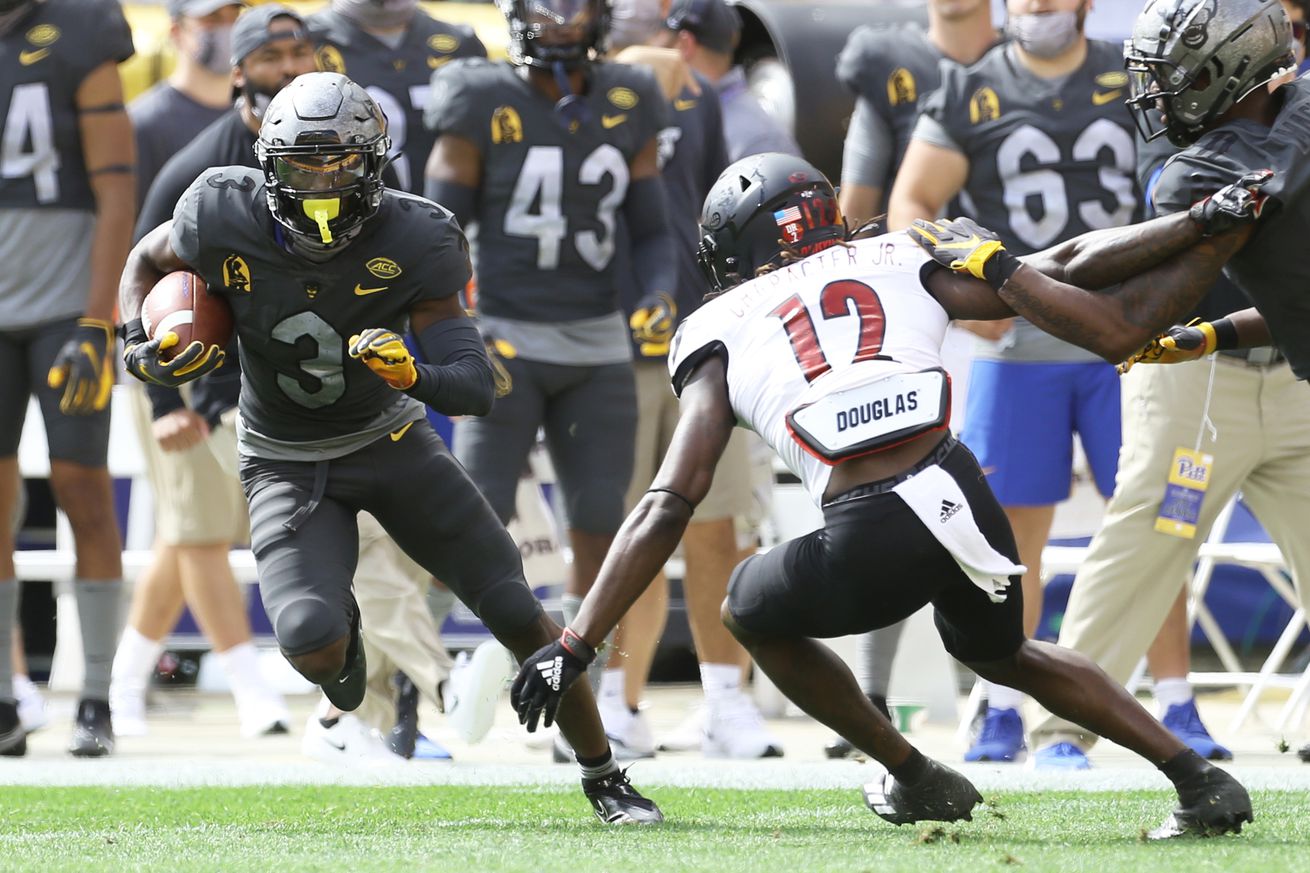 The Panthers led early with kicker Alex Kessman knocking in a couple of early field goals for a 6-0 lead. Pitt would fall behind in the second quarter with Louisville scoring 17 unanswered but a touchdown pass (on a heady play by receiver Taysir Mack who got up after a nearly tackle after a catch and headed to the end zone) put them ahead for good.

I’m glad Pitt won this one and, frankly, kind of relieved. As the game went on, I just felt like the Panthers had the better team. And it’s tough to lose games like that. Pitt could have made it a little easier on themselves with a bit more offense but I ain’t complaining, folks.

Story of the game, point blank, was the defenses. That was kind of surprising for a couple of reasons.

We know Pitt’s defense was pretty good but after giving up 17 early points, you had to wonder what the second half would hold against a team with a good offense. But the Panthers proved ready, allowing only three second half points. If you told me at halftime they would practically need to pitch a second half shutout to win, I would have expected the Panthers to end up on the wrong side of this one. Against a very good offense, that would have seemed unrealistic. But those guys weren’t just good in the second half, they were phenomenal. Pitt playing well defensively didn’t surprise me — that they basically played lights out in the second half after giving up 17 first half points did a little.

What Louisville’s defense did was also a little surprising to me. Now, as I said in the preview, their defense was not as bad as some thought. The 21 points they gave up to Western Kentucky, for example, were actually mostly related to special teams issues. Still, I wasn’t expecting them to keep Pitt’s offense in check as much as they did. I would have guessed that Pitt’s offense had more success today than they did.

This was a game that, if you’re Pitt, you had to have and that’s because the schedule gets tougher and tougher. You lose a game like this and you can probably write off trying to get into the ACC title game. After games against North Carolina State and Boston College, there’s a potentially big matchup against Miami. Then there’s Notre Dame. There’s Florida State. There’s Virginia Tech. And of course, there’s Clemson. It just gets harder and harder, culminating in that Clemson game.

Someone made a comment in a recent post about Pitt getting to eight wins, almost in a way that made it sound not that impressive. I replied and said that eight wins would be a pretty good year given the circumstances of the schedule and playing only 11 games. You lose today’s game and you’ve got a very difficult road to eight wins.

Look, eight wins is not what this team wants and with eight wins, you can expect a lot of the ‘Same old Pitt’ talk, even if that’s not necessarily fair with this schedule. But I make that point only because it’s important to remember that games against the Louisvilles, the Florida States — if you’re going to have what you call a good season, those are games you have to have. Period. That’s not to say those are not good teams. Rather, it’s because the schedule is just so freaking difficult that you’ve got to win games like that if you’re talking about challenging for another ACC title game appearance.

I’m already rambling on but let me hit a few things here that stuck out to me today.

The Pitt defense — just get out. There were a few breakdowns but you talk about bending and not breaking — that was it. Pitt gave up a big run but really beat up on an offense that was highly touted and ended up with seven sacks, 12 tackles for loss, and three interceptions. Those are video game numbers, boys and girls. There was the breakdown in the secondary that allowed Louisville’s other touchdown but remember, that came on a short field after the highly questionable Kenny Pickett ‘fumble’.

Dig deeper — go to the box and look at what Louisville did. You had the aforementioned seven sacks. Barely 100 yards of passing. Barely a yard per carry if you take out the big run they had early. Three turnovers. Three second-half points. And of course, they were stonewalled at the end of the game as Pitt ended their last drive relatively easily. The defense wasn’t perfect but, man, what more could you possibly ask for against a team that had rolled offensively coming in?

We don’t know the outcome of the rest of the games, obviously, but I’ll say this — the defense will give them a chance to be competitive every time out. And that includes games against Notre Dame and Clemson. That’s no guarantee that Pitt wins those games, of course, or even that those games will be close. That will be dependent on Pitt’s offense playing better and of course, they’ll face some pretty good defenses themselves. But there’s the chance that they’ll be in every game because the defense, really, can be that good.

They will give up big plays from time to time because they sell out to stop the rush and to pressure quarterbacks. That will expose the weakest part — the corners. But that unit has the chance to be very special. And we can look at the few breakdowns by the secondary but again, Louisville had 107 total passing yards. Couple of bad plays but those guys were basically lights out today and you really can’t ask for much more. The secondary, including the corners, has mostly been very good.

Offensively, things weren’t so great. You settle for the early field goals. You get 220 yards passing. There’s a pick by Kenny on a tipped ball. Big drop as they’re trying to run out the clock late. The running game that was up and down. Oh, and I wasn’t thrilled with some of the playcalling, either. But if you boil everything down, they did enough to win.

You really would have liked to see some more points, obviously — particularly in the second half. And there’s clearly work to do in both the passing and running game. Frankly, they’re going to have to do more if they want to win some of the tougher games. But the reality is those guys aren’t going to come out and hang 30 points on the board in every game. You sort of just take a game like this and are thankful that the offense was good enough today with the understanding that it needs to be better.

Part of that is getting a little more consistency out of the running game. Pitt really could have used a bigger back in there at times today. Daniel Carter, one of Pitt’s bigger backs, seems like he was out again, not registering a carry. A.J. Davis and Vincent Davis both made some plays, as did freshman Izzy Abanikanda. But there were times when you would have at least liked to see if Carter could have made a difference. The running back unit is still one that’s being decided and still very much in search of a true No. 1 guy, even if Vincent Davis is in that role right now. Pitt wanted to play power football at the end of the game and sort of grind out the clock. But that simply didn’t happen and it was up to the defense to get stops.

And of course, it was great to get the kicking game on track. Alex Kessman was 3-3 on field goals and let’s hope that ends any silly discussion of trying to replace him. I mentioned this in an earlier post, but slow starts were not new to Kessman. And while he struggled coming into this one, his track record shows that he’s pretty good. It was just glad to see him get back on track because he’s going to continue to play a role this year.

I don’t want to make the kicking sound like an afterthought because, honestly, it’s more important than most will realize. Pitt will almost certainly be involved in more equally close games this year and a questionable kicking game isn’t something they can afford. If Kessman misses those kicks, you see how easily the Panthers could have been on the wrong end of this one. I can’t say it enough — the kicking is going to play a large part in us looking back at the end of the year and determining if it was a good season or a disappointing one. It’s that close and means that much.

You add it all up today and Pitt is 3-0 this year. Coming into the season, the Louisville game was one that you look at and could understand how that one could go either way. But you’ve got to feel great to get out of here with a win today. North Carolina State and Boston College will not be gimme games by any stretch of the imagination. After all, Pitt lost to Boston College in the regular season finale last year. But if you can somehow get both of those, you’ve got a lot of momentum built up and are maybe knocking on the door of the Top Ten with a big game against Miami.

Can’t get ahead of ourselves here but this was a really big win. A 3-0 start here was so, so important with the rest of the schedule being so difficult. You just have to take your hats off to the Pitt defense who just keeps coming out and proving they’re absolutely for real.

This article was originally published at http://cardiachill.com (an SB Nation blog). If you are interested in sharing your website's content with SCACCHoops.com, Contact Us.
Categories: Football, Louisville, Pittsburgh, Recap, Video