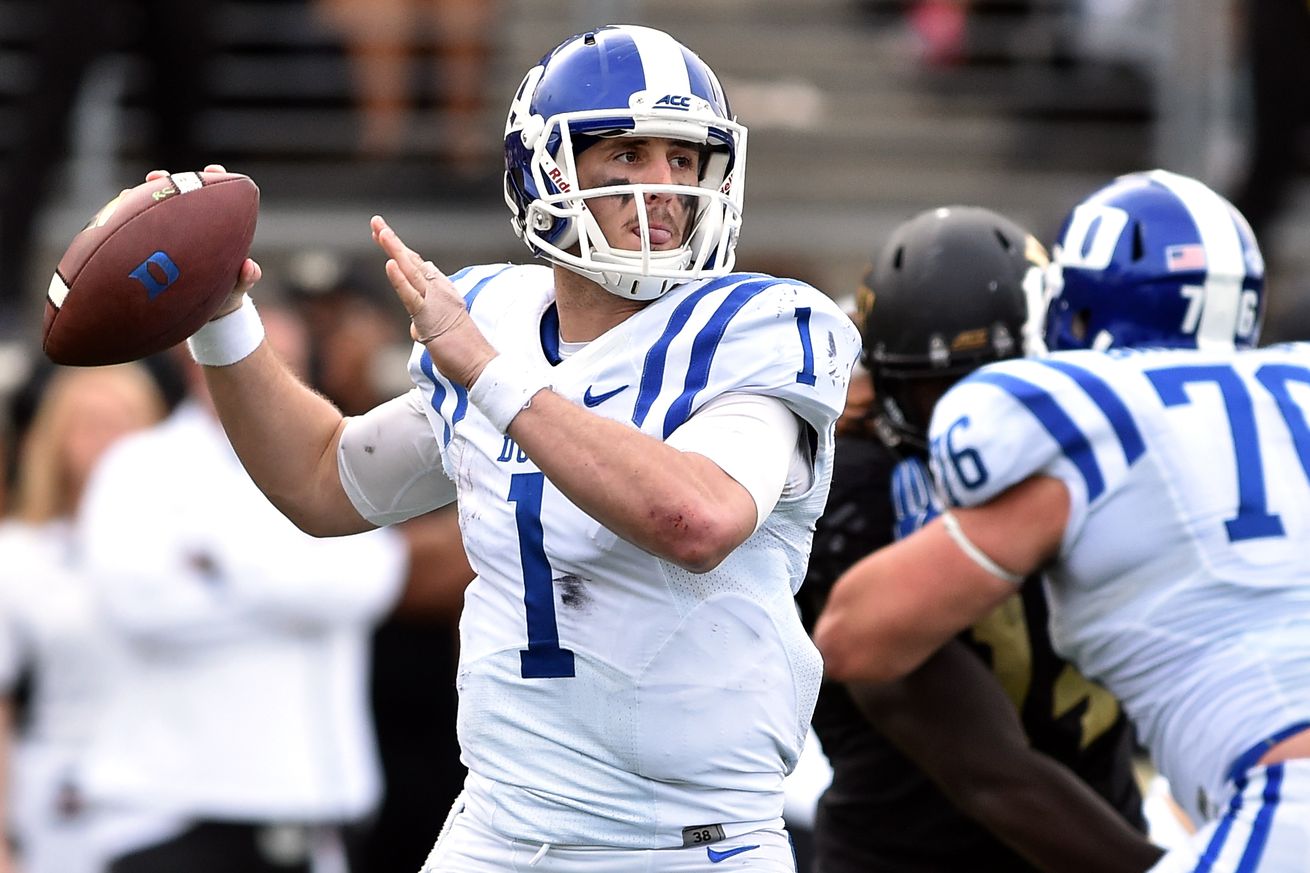 “First and foremost, we are 100 percent supportive of Thomas and his decision to complete his eligibility at another school,” Cutcliffe said. “I’ve said it many times before: Thomas is an incredible young man. He’s conscientious, dedicated and what I would consider the ultimate teammate due to his selflessness and leadership qualities. Thomas loves Duke. He and I have had great discussion regarding this decision, and his love for this university and everything it represents is what made this decision so difficult for him.

“Since arriving on campus, Thomas has done everything we’ve asked him to do, plus some,” Cutcliffe continued. “The injuries he’s endured have been well documented, but his perseverance to recover from those setbacks is one of many attributes that make him such a special person. On the field, I don’t think we’ve had a player with a greater combination of toughness and competitiveness, and his impact on our program has extended from the field, into both the classroom and locker room and beyond. The greatest thing I can say about Thomas is that he earned the respect from every player, coach and staff member within our program by achieving levels of character and spirit exemplified by only the best of the best.”

Sirk graduated from Duke in May, 2016 with a degree in political science while minoring in education. He is scheduled to complete degree requirements for a master’s degree in liberal studies this spring. In November of 2016, Sirk was granted an extension of eligibility by the NCAA, making him eligible to participate in the 2017 football season.

“I am beyond thankful for my time spent at Duke University,” Sirk said. “I will never take for granted the relationships I’ve built with the entire Duke community, especially my teammates and coaches. The men in the locker room have become my family over the course of five years, and calling them teammates would be an understatement.

“When I joined the program in the spring of 2012, I never expected that I would leave here with two degrees and to become the man that I am today,” Sirk continued. “I am grateful that Coach Cutcliffe believed in me to play quarterback at the next level when not very many people did. I will carry with me the life lessons I learned both on and off the field and I’ll leave Duke University prepared to handle any situation that life could throw my way. More importantly, I have learned that excellence is the standard. Although my time here is coming to an end, I will forever remain DukeGang, and I will always call Duke University home.”

Duke will grant Sirk an eligibility transfer release to include all schools except members of the Atlantic Coast Conference, Army West Point, Baylor, N.C. Central and Northwestern.

In the ACC, Sirk finished the 2015 season ranking third in total offensive yards per game (285.7), fifth in passing yards per game (218.8) and 10th in rushing yards per game (66.9). In addition, he spearheaded an offense that was one of just three units in the league to rank among the conference’s top five in scoring offense, total offense, rushing offense and passing offense, joining Clemson and North Carolina. Sirk, an Academic All-ACC and CoSIDA Academic All-District III honoree in 2015, earned ACC Offensive Back of the Week accolades after leading Duke to a 45-43 four overtime win at Virginia Tech on October 24, 2015, by accounting for 379 total yards (270 passing & 109 rushing) with four touchdown passes and the game-winning PAT rush to end the longest game in ACC history.

On December 26, 2015, Sirk guided Duke to a 44-41 overtime win over Indiana in the New Era Pinstripe Bowl by compiling 318 yards of total offense while rushing for two touchdowns and throwing for a third score. He was named the game’s co-MVP along with running back Shaun Wilson as the Blue Devils won their first bowl game since a 7-6 decision over Arkansas in the Cotton Bowl on January 2, 1961.

This article was originally published at http://www.AllThingsACC.com. If you are interested in sharing your website's content with SCACCHoops.com, Contact Us.
Categories: Clemson, Duke, Football, Virginia Tech