Give Tony White the Supermax 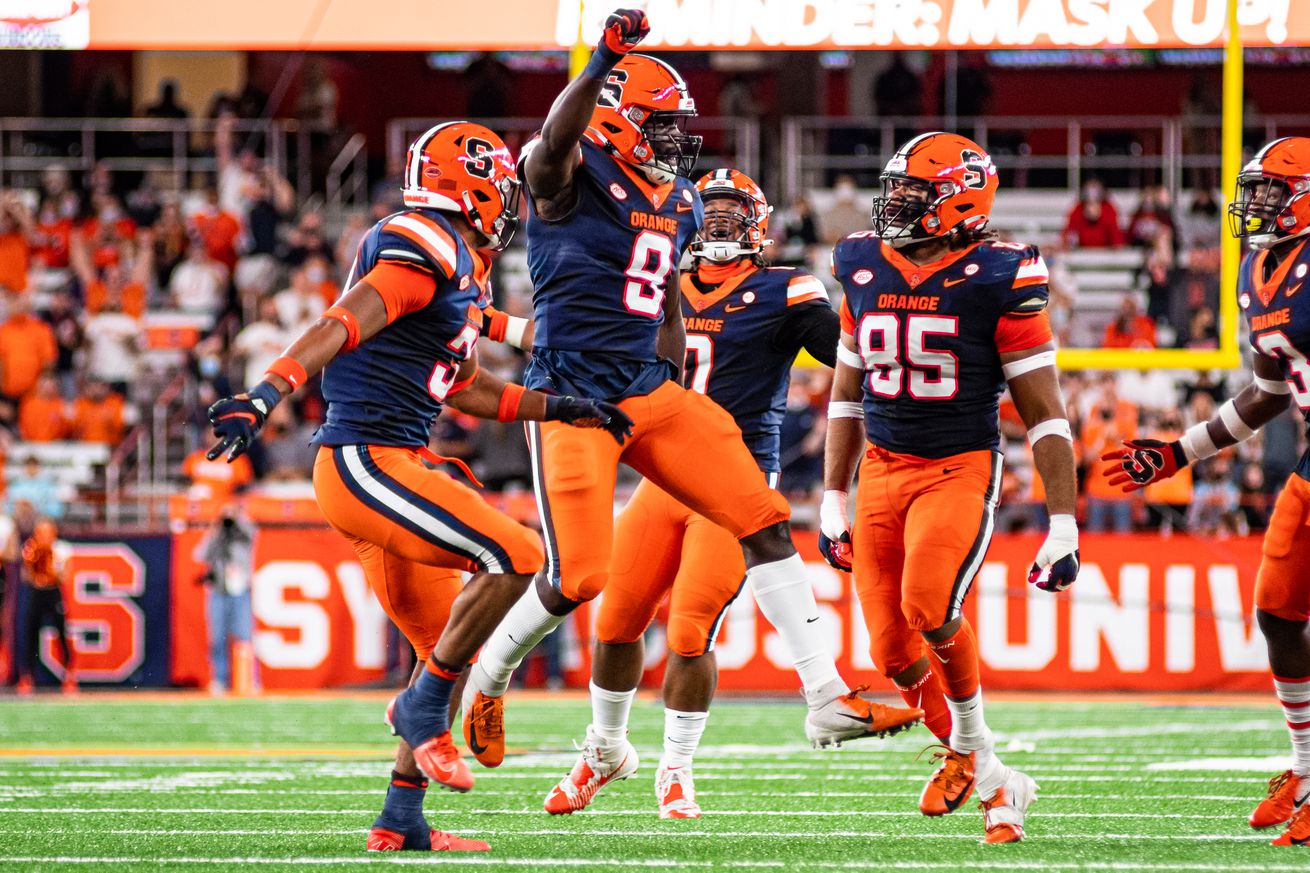 I counted at least 20 NFL teams in attendance for the Syracuse Orange game against Liberty. Most of them were there to see Malik Willis, the star quarterback of the Flames.

What they got was a Syracuse defense that lived in the backfield and made incredible plays to lead the Orange to a 24-21 victory over Liberty.

We’ll get to the much-discussed about quarterback decision for SU later, but we need to give the ‘Cuse defense its due. Tony White’s men sacked Willis six times, held him to a net gain of 49 yards, stopped him at the goal line on fourth down, and forced a fumble to stifle the electric quarterback’s game.

I talked before the game about how important Mikel Jones would be to shut down Willis. He was everywhere, leading the Orange with eight tackles, including a sack. Jones stayed back in a QB spy on many plays and used his preparation to read Willis like a book.

“I was preparing up to an hour before the game,” said Jones. “Just watching, seeing where he wants to go with the ball. I feel like the whole defense did a good job watching film this week.”

Willis did have 205 yards in the air on 14-19 passing for three touchdowns, but a large majority of those yards came while the defense was tired. At least through the first half, the Syracuse secondary didn’t give Liberty too many options in the air, which allowed the Orange linebackers to do their job.

The defensive line also vastly improved from last season. Liberty destroyed Syracuse on the ground in 2020, with the Flames going for 338 rushing yards. This season, the Orange limited Liberty to 150 yards.

A lot of praise has to be thrown at Tony White. It’s clear that the players have bought hard into his 3-3-5 system and it allows the defenders in the box to be aggressive towards the ball carriers in the backfield. The linebackers are the biggest benefactors of this system, and Jones continues to shine along with Stefon Thompson and Marlowe Wax.

That being said, the offense needed to support the defensive effort, and once again it was Sean Tucker who answered the call. He rushed a career-high 32 times for 167 yards and a touchdown. Syracuse suffered a lot offensively last season when Tucker couldn’t stay in games due to his stamina. Now, the coaches realize that he’s the centerpiece of the offense.

“Our number one job is to find ways to make sure he gets the ball,” said Dino Babers on Tucker.

When Babers initially came to Syracuse, what excited fans about his offensive system is that there seemed to be the opportunity for explosive offensive plays through the air. However, the Syracuse head coach has always preached that his offense is developed through the run game. The Orange certainly ran the ball against the Flames, rushing 53 times as opposed to 15 passing plays.

Tucker continues to be the most valuable part of an offense that has revealed itself to be a run-focused system as opposed to the balanced affair of the past. What helps Syracuse is that he hits gaps hard and usually finds a way to fight for extra yards he doesn’t deserve. It also helps in the explosive plays that allow Tucker to steal the headlines.

But there’s probably a bigger reason for the play disparity - the quarterbacks. Let’s get to it now. Babers said after the game that he was still deciding during practice who would start against Liberty. Garrett Shrader eventually got the call to start, but it was a late decision. Shrader said that Babers told them in the team hotel his decision a couple of hours before game time.

Shrader showcased some good moments with his legs. Nothing particularly breathtaking, except for a nice move on his second of two touchdown runs on the day. However, the big concern regarding the quarterback comes from his arm. He was only 6-15 through the air for a measly 77 yards. That lack of effectiveness in the passing game will easily be exploited in ACC play.

“I’ve just got to make those throws,” said Shrader. “For some of them, it felt like I was waiting a bit too long. I’ve gotta make them.”

Syracuse is a great running team. There’s no denying that. However, there were multiple times throughout the game where obvious passing situations cropped up. That limited what Syracuse could do as Shrader’s accuracy and decision making drops drastically when he throws a ball over 10 yards.

Tommy DeVito didn’t see the field at all against Liberty. I thought there might be situations where he would be implemented, especially to give some balance and spark to an offense that stalled in the second half. But Babers stuck with Shrader. Which leads me to a mid-game revelation I had that I’ll leave you all with and that I’ll expand on later this week.

What that means for the future of the program remains to be seen.

This article was originally published at http://nunesmagician.com (an SB Nation blog). If you are interested in sharing your website's content with SCACCHoops.com, Contact Us.
Categories: Football, Recap, Syracuse