What are the future benefits for the ACC after a remarkable 2016 football season? - SCACCHoops.com

What are the future benefits for the ACC after a remarkable 2016 football season?

We’ve already written a couple of articles on the ACC’s remarkable football season, led by the Clemson’s national title.  The ACC was the nation’s best football conference this year.  There is no question about it. We asked previously was the ACC’s success sustainable? 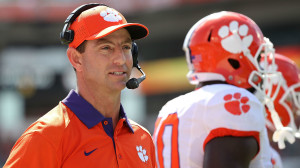 I think we can assume that the ACC won’t regress to it’s BCS football era self. It will continue one of the better football conferences in America. Clemson and Florida State are too well positioned to be national powers for years to come, even if the ACC slightly backs up next year. In addition to FSU and Clemson, there are just too many good coaches in the ACC for the conference for this season to be a fluke.

Now the question is what are the future benefits for the conference after a season like this?

Here’s an article from the esteemed David Teel back in 2012 discussing the ACC Media Contract at that time.

Swofford estimated that football drives 70-80 percent of rights fees and acknowledged that more national success in that sport would have meant additional revenue.

“We seem to be right on the verge of taking that next step,” Swofford said, not for the first time. “Our main goal … is to have our best teams winning on a national stage.”

Consider it mission accomplished. The ACC is tied to ESPN until the mid 2030s, but there are still contract lookin periods, and the ACC Network is just 2 years away from being launch. Do you think that ESPN has a little more leverage with a much improved ACC football conference, than if they were in the position of the Big 12 with 0 playoff wins and 1 just participant since the playoffs started? The Big 12 hasn’t won football national title since the 2005-2006 season, and the Pac 12 hasn’t won one since the 2004-2005 season.

There are carriage fees to be negotiated for that ACC Network, and I guarantee they are worth more now than 4 years ago.

Of the contact bowls for the Power 5 conferences, the ACC gets the smallest payout. The Sugar and Rose Bowls payout $40 Million per conference. The Orange pays out $27.5 Million to the ACC and the 2nd highest rated Big 10, SEC, or Notre Dame team available. These contracts were negotiated when the ACC was at it’s lowest point.

Let me ask you a question. 4 years ago does the ACC get a team into the playoffs with a loss? Florida State in 2014 was undefeated and was the 3rd seed. This year Clemson lost a late season game to Pittsburgh, and was the 2 seed. The ACC finished with 5 ranked teams this year (Clemson, FSU, Virginia, Louisville, and Miami) – and Georgia Tech just missed. Most early pre-season polls have 4 or 5 ACC teams. That’s how you can build a resume.

5 College Gamedays in 2016 featured an ACC Team. In 2012 there was 1 as in uno. The 5 College Gamedays were the most for the ACC since Gameday started. That’s publicity for the conference and it’s teams. The ACC’s top games are now getting either the noon national slot or the 8 PM ABC national TV slots.

Louisville at Clemson: A monster 6.0 overnight, the best Saturday overnight this season and second highest overall, both across all networks pic.twitter.com/FSyNEh2BH4

Louisville’s Lamar Jackson won the Heisman Trophy this year on a 9-4 team. Do I need to anything to that? If Louisville has three losses (before Heisman voting), in a lesser conference is he winning the conference?

This is all a byproduct of an improved football conference and in the future the ACC should continue to see benefits from their improved football, their outstanding 2016, and future continued strong play.

This article was originally published at http://www.AllSportsDiscussion.com. If you are interested in sharing your website's content with SCACCHoops.com, Contact Us.
Categories: Clemson, Florida State, Football, Georgia Tech, Louisville, Miami, Notre Dame, Pittsburgh, Virginia