Next test for Pitt football team is against No. 13 Miami - SCACCHoops.com

Next test for Pitt football team is against No. 13 Miami 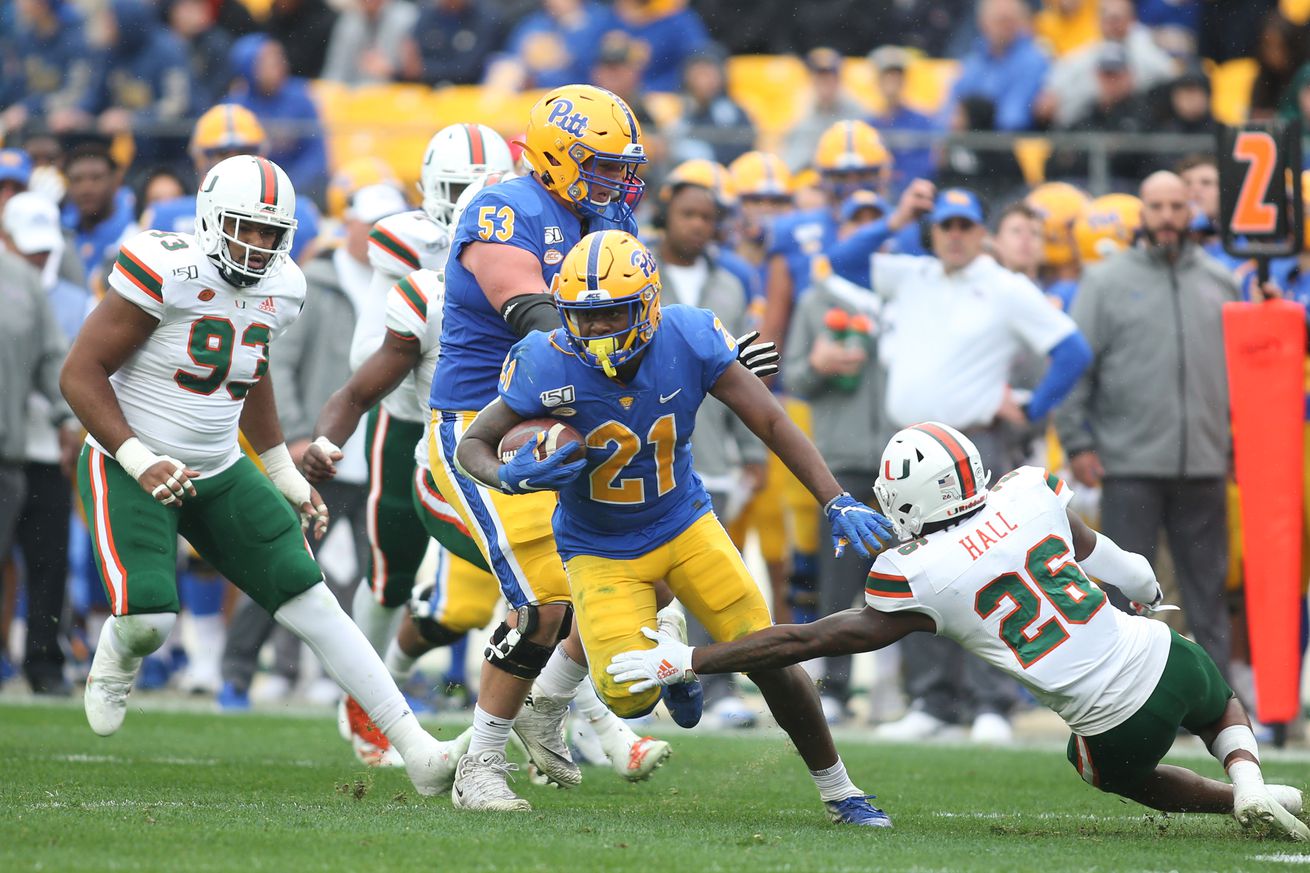 The Pitt football team is reeling after two straight one-point losses to NC State and Boston College the last two weekends. But the Panthers (3-2) have no time to lick their wounds as they’ll face Top 15 Miami this Saturday.

The game is going to be a tough one for the Panthers, no doubt. And it’s one of a handful of other difficult games still on the schedule as Pitt will also face Notre Dame and Clemson.

I don’t want to go back over the last two weeks’ games. Losing by one point to anyone is always tough. When that happens in back-to-back weeks, that’s just demoralizing. But as I said then, those games were tough to stomach even more just because the schedule is so tough from here on out. Pitt really needed those wins and looking ahead, the Panthers will have their work cut out for them to merely finish over .500.

I know the Hurricanes (3-1) come in favored in this one and are a top 15 team. But I’m still not sure exactly where this team is right now. The reality is that Miami could be a bit overrated.

They started getting some attention after beating Louisville on the road but the Cardinals are really struggling and look overrated themselves. Most recently, they were just blown out by 19 to Georgia Tech. Miami gained even more traction by trashing Florida State but the Seminoles look quite bad, too, sitting at 1-3. Like Louisville, they are still winless in the ACC, and the two teams are a combined 0-6 in conference.

Nevertheless, those wins catapulted Miami into the top ten and in the spotlight with a matchup against Clemson last weekend. Miami lost that game 42-17 and, frankly, it could have been even uglier if not for a late touchdown as time expired in the first half after a fluky return of a touchdown on a blocked field goal attempt. The Hurricanes were, like virtually every other team in the nation, simply no match for Clemson.

In terms of common opponents, Miami had less trouble with Louisville than Pitt did. Plus, the Clemson loss is difficult to use as an indictment, of course. The Tigers are the top team in the nation and for good reason. But that Miami was not even competitive shows just how far they are from being elite.

What Miami has done well this year is score points. Other than the 17 they put up against Clemson (and again, seven of those were the result of the blocked field goal), they’ve averaged a whopping 43 points per game.

Make no mistake — this is not the putrid Miami offense we saw last year in a close 16-12 game. The Hurricanes brought in transfer quarterback D’Eriq King and are much more capable. King had a rough day at Clemson but has otherwise been pretty good. In the three games prior to that one, he had six touchdowns to no interceptions and a 325-yard passing day against Louisville.

I know there’s a lot of talk about the Pitt defense underperforming lately and, well, I’ve got no rebuttal to that. Those guys have not had great games lately — no argument there. But what I would suggest is that the defense is still capable of putting together a big game and I would be surprised if Miami had a field day on them like they did against Louisville and Florida State. Time will tell, of course, but I expect the Hurricanes to be challenged a bit more on offense on Saturday.

Defensively, the Hurricanes have been up and down. They were torched by Clemson for 42 points and allowed 34 to Louisville. But those offenses are pretty good and Miami also put together solid defensive performances against Florida State and UAB, giving up only 24 combined points in that game.

What do I think? I’d feel a lot more confident if Pitt was at full strength and there is a good chance they will not be. Starting quarterback Kenny Pickett was hobbling badly by the end of the Boston College game and as head coach Pat Narduzzi stated, he’s certainly banged up. Whether he even plays or not is likely up in the air and even if he is able to go, his potential effectiveness is a huge question mark right now.

With a healthy Kenny Pickett, I’d like Pitt’s chances a lot more to hang in there and potentially upset Miami. But with him as a question mark, you really have to wonder if the Panthers can even be in the game.

Neither of Pitt’s backup quarterbacks, Joey Yellen and Davis Beville, have even won the No. 2 job and we’re halfway into the season. And as I mentioned in the recap last week, that neither was brought in late in the game when Pickett was hobbling badly proves that there are big questions about both. If you’re talking about one of those guys coming in with limited experience and trying to defeat Miami, that’s going to be a tall order — especially without a running game.

I think these two teams might actually be closer than some people think. But that’s with a healthy Pickett and I have no idea what, if anything, we’ll see from him this weekend. I’m not confident he’ll play.

Much has been made to the losses to NC State and Boston College, but those games were still very close and with each at 3-1, I do not believe those will be terrible losses by the end of the season. If Pickett is able to go and healthy, I expect we’ll see a competitive game. Without him, though, it’s easy to see it getting out of hand.

This article was originally published at http://cardiachill.com (an SB Nation blog). If you are interested in sharing your website's content with SCACCHoops.com, Contact Us.
Categories: Football, Miami, Pittsburgh

Comments on Next test for Pitt football team is against No. 13 Miami