It was fun and I liked it. 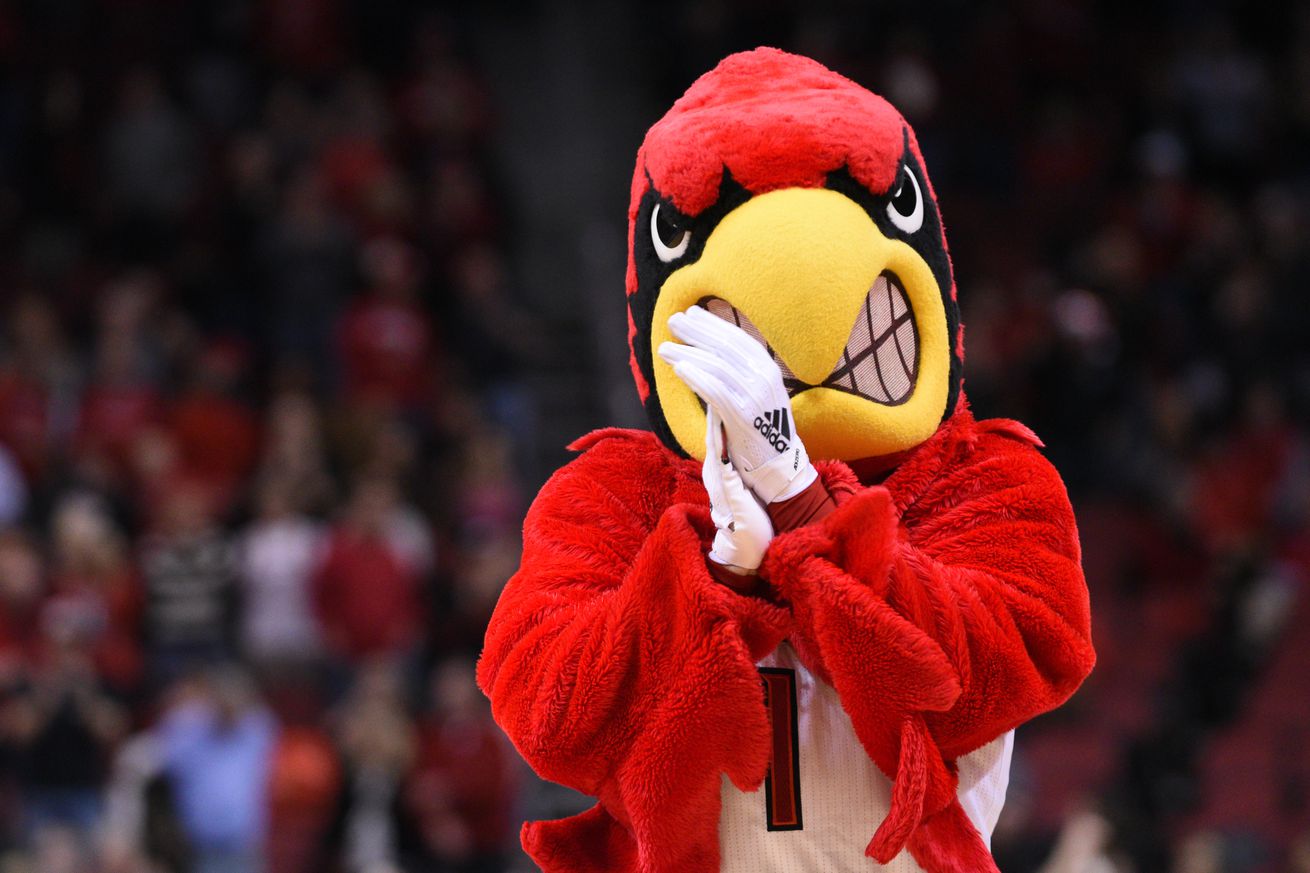 We’ve waited like five years for this season to start so let’s not waste any more time.

—After an abrupt ending to the 2019-20 season that no one saw coming and which left us all empty and sad for the first few weeks of spring, we waited 263 days for Louisville basketball to come back. We fretted over the possibility of the 2020-21 season not happening, we worried about how the scheduling was going to work out and, at one point, whether or not we would have enough healthy players to take the floor. After all of that, we finally made it to Wednesday at 4 p.m. inside the KFC Yum Center.

And then the ACC Network missed the opening tip.

I couldn’t even be mad. It felt so fitting.

The questions about whether or not his game can truly translate to the highest level of the sport are going to persist until Louisville starts running into the biggest boys on its schedule (a solid performance Friday against Seton Hall would certainly help). Still, it was impossible to be anything other than impressed by the first impression Jones made on Wednesday.

From the opening tip, No. 1 in white was in complete control of the game. He showcased his court vision, his passing ability, his craftiness around the rim, and his range. When all was said and done, Jones had flirted (I don’t think it’s a stretch when you’re just two rebounds and three assists short) with becoming the fourth player in Louisville history to produce a triple-double.

He defended well, he kept playing hard even when the game was put out of reach, and he looked like the unquestioned leader of the team every second he was on the floor. I’m not making a First Team All-American prediction or anything else of that sort, I’m just saying I can see what everyone who caught a practice or two this summer/fall was talking about.

—Speaking of Withers, he was probably the player I was most excited to see on Wednesday, just because we’ve heard so much about him and seen so little. Inside, he looked about how you’d expect a freak athlete who’s a bit undersized at 6’8 to look. He’s going to have to play a bit differently against some of the teams with starting centers who are two or three (or six, if we’re talking about Seton Hall) inches taller than him, but he’ll figure it out as he goes along.

What surprised me was how comfortable he looked handling the ball and how smooth his shot from the outside looked. We may only see flashes of it this season, but I’m with those who believe that Withers is going to be a really, really good college player at some point down the line.

—I didn’t expect to see much of JJ Traynor this early in the season, and my guess is a few months ago the staff didn’t think they would be either, but hey, here we are.

Hell of a debut.

J.J. Traynor finished with 3 dunks to tie the Louisville record for most dunks in a freshman debut.

—It was obviously a different viewing experience all the way around, but I think the most jarring thing was hearing a PA voice other than Sean Moth’s. I didn’t really grasp how accustomed I’d become to his cadence until Wednesday afternoon.

—Speaking of jarring noises, I’m not sure how it sounds inside the actual arena, but the low, steady, artificial crowd noise just sounded bizarre on television. It was like having a basketball game while also simultaneously listening to the white noise app on its lowest setting. And it never stopped, which was weird. Sort of like a group of ghosts were trying to haunt the place but their hearts weren’t really in it.

—As it was a year ago, foul trouble was once again an issue for David Johnson on Wednesday, although a little bit of bad luck was also involved. On his foul, D’Andre Davis just started straight shoved him into the shooter, sending him back to the bench.

Though he had a game to forget, there’s zero part of me that’s concerned about Johnson. He’s going to be terrific this season.

—Even though he posted an efficient 17 points on 8-for- 12 shooting, you could tell Samuell Williamson wasn’t quite 100 percent. Here’s hoping he’ll be a step or three quicker and jumping with a bit more bounce a couple weeks from now.

—I’ve praised Chris Mack in each of the past two seasons for not being stubborn and adjusting his own personal style to fit some of the pieces he inherited. Now, with the exception of Malik Williams, he’s got a roster full of nothing but guys he brought into the program, and as a result I think we’re seeing the full shift into the style of play that is going to become the norm.

This team won’t run as much as the last two, and it’s probably going to shoot fewer three-pointers than we’ve seen in over two decades. Mack wants to kill teams in the halfcourt. He wants to grind out wins with tough defense, and guys who attack the rim with reckless abandon.

That’s going to take some time for all of us to get used to, and I’m sure it’s going to be a primary topic of conversation the first time an unexpected or lopsided defeat occurs. But as long as it eventually gets us back to where we all want to be, we will adjust.

—Even if we’re not running as much, we’re still gonna be ooping apparently. Which is nice.

—If we would have gotten a Gabe Wiznitzer cram on opening night, I would have been forced to start drinking immediately and not stop until the Seton Hall game tipped off.

—Anything that goes wrong with this event will be blamed on Kenny Klein. This has been established.

—I’m a big fan of Quinn Slazinski’s confidence. If you don’t have a guy like that who’s always ready to shoot or always ready to make an aggressive first move right when the ball hits his hands, then your halfcourt offense simply isn’t going to work. There are going to be times this year where Quinn is at a huge disadvantage athletically, but I’m expecting him to be mostly rock solid for this season and the two that come after it.

—It was nice to see Aidan Igiehon get in there, get a couple of dunks, and look like he belonged on the floor. I’d forgotten about the haircut though, and it took me more than a moment to adjust.

He almost made it the whole game without a moving screen, but then he snuck it in there right at the end.

—I’ve said this before, but my guy Logan Bauman deserves about a thousand good breaks in the years to come, because he’s caught about a thousand bad ones since 2013. He’s a tireless worker, a great basketball mind, and one of the nicest human beings you’ll ever meet. This season is going to be tough for him and the Aces, but his time is coming.

Thankful to begin a new season tomorrow & grateful in unique circumstances to tip it off where I cherish so many memories & friends! pic.twitter.com/tl3qZKPW8q

—Hearing him call our games always makes me want to keep David Padgett as involved with the program as we possibly can. Like Logan, one of the best people who has ever been associated with Cardinal hoops.

—D’Andre Davis is still something of an enigma to me, but I liked what I saw on Wednesday. He sort of has a Rakeem Buckles-esque outside shot where he shoots it farther up than he probably should. The acitvity around the basket, and the three blocks, were the most impressive parts of his game.

If Malik Williams can get back to 100 percent this season, he and Davis seem like a tandem that could be a nightmare on the defensive interior.

—EVERYTHING IS SO WEIRD.

—You leave a Levitch open for a three right before the halftime buzzer, they’re not going to miss. This is simply a fact at this point.

—If you have a t-shirt contact, let them know I’m interested in a “2020 The Wade Champions” mock up.

If the situation calls for it, I would also be willing to invest in a “2020 The Wade Runners-Up” shirt. Here’s hoping it doesn’t come to that though.

—Look, I don’t know how the next four months are go (and I mean that on multiple levels), so I’m just telling myself to enjoy this right now. I’m already giddy about Friday.

This article was originally published at http://www.CardChronicle.com (an SB Nation blog). If you are interested in sharing your website's content with SCACCHoops.com, Contact Us.
Categories: ACC Network, Basketball, Louisville, Recap, Video