It's 'Show Me' time for Louisville football and Lamar Jackson - SCACCHoops.com

It's 'Show Me' time for Louisville football and Lamar Jackson

Let’s get it done. 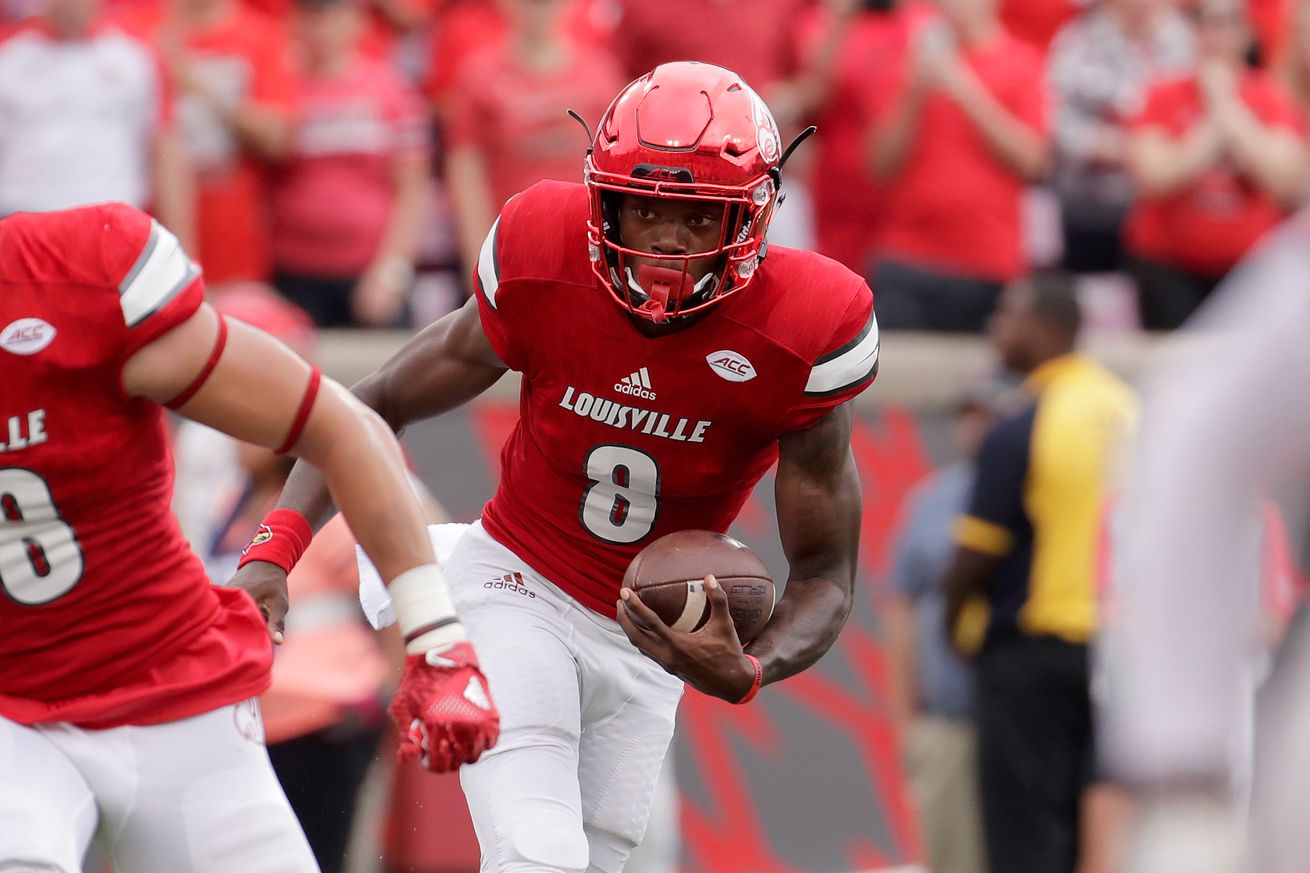 Collegiate sports feature a lot of “slam dunks,” and not just those of the basketball variety. By saying slam dunk I simply mean a certainty, a given, an inevitability. One prime example would be the following: it’s pretty much a “slam dunk” that Alabama will annually be in the discussion for a chance to win a college football national championship. Another “certainty” would be UCONN’s women’s basketball program destroying opponents on a nightly basis in route to their thousandth Final Four. And most folks would agree that it’s pretty much a “given” that every year Duke will be the most despised men’s basketball program in the intercontinental United States.

So in the same vein as the aforementioned examples, another slam dunk per say would be college football’s previous year’s Heisman Trophy winner being tabbed as the all-out favorite to not only win the award again but to also be mentioned in every preseason discussion as the best player in his sport.

Despite putting up school and conference record breaking numbers last season, Lamar Jackson enters the 2017-18 college football campaign as a player who, while respected, is being mentioned as anything but a “slam dunk” to make this season as memorable as his last. There are numerous reasons as to why the college football pundits and talking heads are apparently overlooking Jackson, some of which I agree with and others that I scoff at. But even as a die-hard Louisville fan, a homer with no shame and a personal big fan of Jackson (Yeah, I bought the tuxedo t-shirt), I begrudgingly must admit that I understand the lack of hype.

There, I said it and I didn’t stutter.

In spite of my opinion, let’s not get it twisted. I don’t question Lamar Jackson and his abilities. In fact, I marvel at them. But, it’s what I see around him that gives me pause. Last season Jackson was sacked 46 times, more than any other quarterback in the ACC. Can you imagine how ugly some of the Cards’ games may have turned out in 2016 with a pocket QB unable to evade defenders or make the tough deep ball throws? Oh, the horror!

So, as a result of last season’s offensive line’s epic collapse, changes were made…..changes that were necessary if the Cards were and are going to make any type of serious run at the College Football Playoffs. But changes don’t assure success. Sure, I am optimistic about the fact that Mike Summers is back. I also love the idea of having some fresh, young faces with promise and upside in the starting lineup. Yet, if I’m being profoundly honest then I’d be lying if I told someone that I’m not the least bit gun shy going “all in” toward believing that the Cards O-line is completely fixed and ready to protect the team’s most coveted player.

Only time will actually tell what this new look offensive line will produce. Even if it’s shaky, Jackson is talented enough to still make big plays. Yet, I personally cannot blame those who have concerns. Should it cause those same individuals to question Lamar Jackson? No. But in reality, does it? I believe it to be true. A man can only do so much.

Aside from the newly built offensive line, one should also consider the fact that Jackson’s top 3 three receivers from last season are no longer wearing the red and black. Hikutini, Quick and Staples have all moved on and it’s now time Jaylen Smith and a slew of other young guns to etch their names in A.F.R.O.S. lore. While I get giddy thinking about the prospect of Jackson throwing to the likes of Dez Fitzpatrick, Seth Dawkins and Traveon Samuel, I again don’t begrudge those who are a little skeptical about this group being able to vault the former Heisman Trophy winner to a new stratosphere. The talent is there, and my gut tells me that some exciting big plays await Card Nation. With that said, I get why the “experts” are waiting to see for themselves.

Despite having a supporting offensive cast that is undeniably being perceived as unproven, there ARE some positives that should give even the biggest naysayers reason to keep Lamar Jackson on their list of players who can have a special season. The first positive would be the Cards’ schedule. Opening on the road on national TV against a Big Ten opponent gives Jackson the chance to make a statement early. A home tilt against defending National Champion Clemson that could lure the likes of College Gameday and a road game at Florida State will also provide Jackson the stage he’ll need to separate himself from others like he did in 2016 when he carved up the Seminoles in PJCS. The rest of the ACC schedule paired with a revenge game against in-state rival Kentucky should complete a slate of games that lends itself toward producing a repeat Heisman Trophy winner.

Aside from the schedule, let’s not forget that Jackson has Bobby Petrino in his corner. I like LJ’s chances of putting up even bigger numbers after having a year of running Petrino’s offense under his belt. And after all this talk about offense, one should also consider the fact that the amount of Jackson’s field time SHOULD be at a premium with the defense that new defensive coordinator Peter Sirmon will run onto the field. With 8 returning starters and studs like Stacey Thomas and Jaire Alexander, the Red Swarm looks more than prepared to keep opposing teams’ offenses on the sidelines.

So in summary I’ll say this: I understand why so many Louisville fans are miffed at what they consider to be a lack of reverence that Lamar Jackson has received thus far going into Saturday’s season opener. But even though I understand and empathize with those feelings, I’m not up in arms over it. In fact, I almost expected this to happen. And besides, who doesn’t like being the underdog?

My gut tells me that the lack of hype is the one thing that could and will propel the Boogeyman into a season that will again produce head scratching statistics, enough wins to compete for a conference title and a return trip to NYC where he could potentially repeat as the finest college football player in the land. We all witnessed what the overwhelming (yet at the time justified) hype did to a team late last season that was obliterated at Houston, shocked at home by an inferior UK team and manhandled by an average LSU squad.

So spare me the hype, and give me the results…….Go Cards, Beat Purdue!

This article was originally published at http://www.CardChronicle.com (an SB Nation blog). If you are interested in sharing your website's content with SCACCHoops.com, Contact Us.
Categories: Clemson, Duke, Florida State, Football, Louisville