Dabo Swinney did not build a SEC-like Team at Clemson - SCACCHoops.com

Dabo Swinney did not build a SEC-like Team at Clemson

I saw this posting from from the blog SaturdayDownSouth ”Conference affiliation aside, Dabo Swinney built an SEC-like Clemson team”. Now SaturdayDownSouth is a fine blog. They write a lot of good articles, but on this I completely disagree. Clemson is most definitely not an SEC like team. In fact they are the epitome of the new era ACC team. 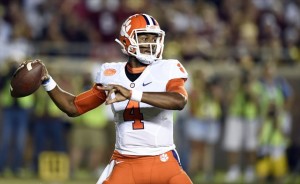 In 2016, SEC teams are characterized by unimaginative offense, pedestrian quarterback play, and at times good defense especially along the defensive line. Does that sound like Clemson to you? Actually since Alabama started steamrolling the SEC in 2011, outside of Auburn’s 2013 national title game run the SEC has been a one team show. The SEC offenses have been stuck in the dark ages for a number of years.

These days unless you are copying Alabama, trying to emulate the rest SEC won’t get you to the national title game. What Clemson has been built on has been if anything on the Florida State model – excellent quarterback play, skill position talent everywhere on offense. This gives you the ability to compete in a shootout. Also there is talent across the defensive side of the ball.

Certainly SEC teams recruit well on paper. Clemson does too, but what separates Clemson from their SEC counterparts is QB play and smart innovative offensive play calling. If you are a follower of the ACC you know the conference was loaded at the QB position. Offenses ranged from Paul Johnson’s triple option, to Clemson’s spread attack. The constant was quality offense and good QB play. That’s not SEC. That’s ACC.

That ACC team makeup worked pretty well this year to the tune of a 15-6 record against the SEC and Big 10.