A look back at the top moments of the era after the announcement of Fedora’s official contract extension. 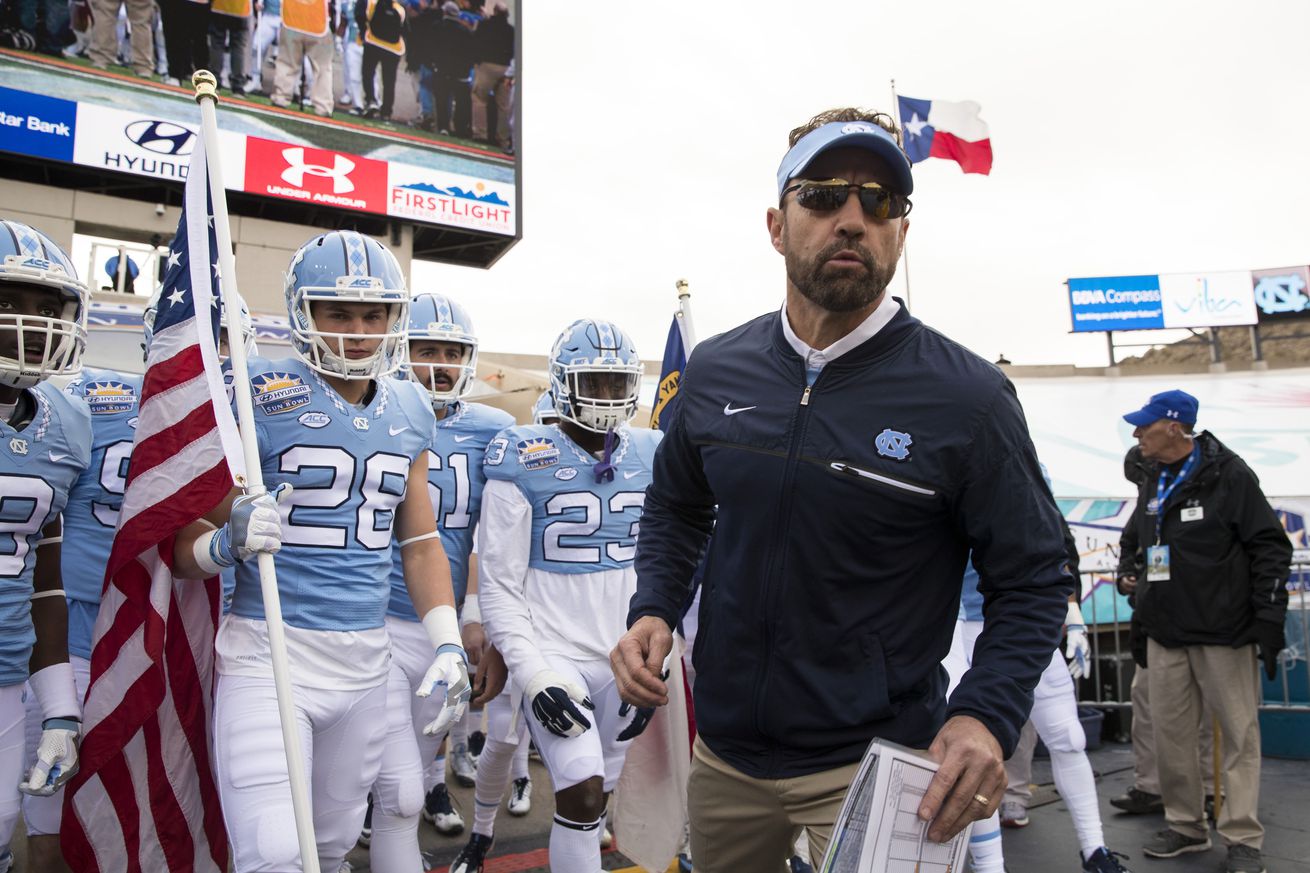 Last Thursday, the UNC Board of Trustees formally approved a seven-year contract extension for Coach Larry Fedora. This deal, originally announced in December of 2015, will run through the 2022 season.

The contract gradually increases Coach Fedora's pay from $2 Million (2016) to just over $3 Million (2022). For the 2017 season, he is slated to make $2.29 Million. Coach Fedora will also be eligible for just over a million dollars in bonus compensations.

In honor of the formal approval of Coach Fedora's seven-year contract extension, let's take a look back to the top seven moments of the Larry Fedora Era at UNC.

*Note* These moments are in chronological order. Some "moments" are actually multiple games with the same theme (last-second wins, wins over rivals, etc.)

In Fedora's first season, he guided the team to a 5-3 start. However, close losses to in-state rivals Wake Forest and Duke had fans reeling. A week after a tough last-second loss at Duke (that gave Duke their first bowl-eligible season since 1994), the Heels hosted an NC State club that they had not beaten since 2006.

The Tar Heels jumped out to an early 25-14 lead at the end of the 1st Quarter, but the Wolfpack held the Heels scoreless in the 2nd and took a 28-25 lead into the half. After another scoreless quarter, State had pushed the lead to 35-25. It looked as if the Heels would lose to all three in-state rivals for the first time since 1989.

The fourth quarter would change everything. A Bryn Renner touchdown pass and a Casey Barth 34-yard field goal tied the game with just over a minute left. Carolina's defense forced State to punt with just 30 seconds left. Giovani Bernard did the rest.

Carolina would go on to finish the season atop the Coastal Division at 8-5, but could not participate in post-season play due to NCAA Sanctions.

UNC's 2013 campaign got off to a rocky start. Opening the season with a 1-5 record, UNC seemed poised for a finish in the ACC cellar. Blowout losses to South Carolina and East Carolina were tough to stomach. However, UNC ripped off five straight wins to finish the season bowl eligible at 6-6 and 5th in the Coastal. They would be matched up with the 9-3 Cincinnati Bearcats who finished 3rd in the American Athletic Conference.

A touchdown run by Romar Morris, a safety by Kareem Martin, and a punt return touchdown by T. J. Logan opened up the 16-0 lead for the Tar Heels. After a Cincinnati field goal, UNC scored twice more. A Marquise Williams touchdown pass to Jack Tabb and Ryan Switzer's NCAA-record tying fifth punt return touchdown of the season pushed the lead to 29-3. The teams would trade TD runs to make the score 36-10 at the end of the 3rd Quarter.

In the opening minutes of the 4th Quarter, Cincinnati scored again and Logan fumbled the ensuing kickoff to give the ball to the Bearcats at the six-yard line. The UNC defense stood tall and forced a turnover-on-downs when Cincinnati's 4th Down pass bounced incomplete. UNC used a 14-play, nine-minute drive ending in a long field goal to drain the clock and ice the game.

In 2014, UNC had a knack for winning games at the last possible second. Thus was the case for wins over Georgia Tech, Virginia, and Pittsburgh. Coincidentally, all three wins came in a four-week period between October 18th and November 15th, the only non-Fourth Quarter decision during that span being a 47-20 loss at Miami.

The Georgia Tech game was one where UNC saw a 35-24 Fourth Quarter lead disappear. Georgia Tech made the score 43-42 with a little over three minutes to go. UNC began their final possession on their own 25. They were able drive the length of the field and get into scoring position. A defensive pass interference at the two-yard line setup the winning scamper for T.J. Logan. The two-point conversion failed, but Georgia Tech only had 11 seconds left and both passes fell incomplete.

The Virginia game never saw a UNC lead until the final score. UVA struck first and UNC tied. This back and forth happened through the first three quarters with UVA never getting ahead by more than seven. With 11:28 left in the Fourth Quarter, Nazair Jones picked off Greyson Lambert and returned it to the Virginia 38.

A 27-yard 3rd-and-10 pass from Marquise Williams to Ryan Switzer set Carolina up with 1st-and-10 from the Virginia 11. Two plays later, Williams was sacked and lost his helmet. Per NCAA rules, Williams had to come out for at least one play. In came Mitch…uh…Mitchell Trubisky, who on the very next play, threw a touchdown pass to T.J. Thorpe. Nick Weiler put the Heels up 28-27 with the extra point kick. UNC recovered an onside kick and ran out the clock for their second 4th Quarter victory.

The Pitt game wasn’t a game to be remembered in terms of rush defense. James Conner slashed the UNC defense for 220 yards and four touchdowns. Pitt rushed out to a commanding 21-7 lead before Carolina added a touchdown right before the half to make it 21-13. Carolina then scored out of the break coming within two at 21-19.

However, Pitt answered with a score of their own. UNC then scored 15 straight points to take a 34-28 lead at the beginning of the Fourth Quarter. The teams traded drives ending in punts before James Conner scored for Pitt from 22 yards out, giving Pitt the 35-34 lead with 3:33 left in the game.

Again, UNC took possession at their own 25 with just over three minutes remaining. Again, T.J. Logan ran in the winning score; this time from the one-yard line. However, on the ensuing possession, Malik Simmons forced a fumble that Shakeel Rashad pounced on to ice the game away.

4. The Victory Bell Returns (and stays) in Chapel Hill with Back-to-Back Dominating Wins over Rival Duke

Duke entered the game against UNC ranked 25th in the nation. The UNC defense forced three turnovers while the offense racked up nearly 600 total yards en route to a 45-20 victory. 2015 wasn’t too much different. Carolina scored easy and often. UNC’s first play was an 89-yard flea flicker to Ryan Switzer. UNC capped off an amazing first half when Marquise Williams found Mack Hollins deep for a 49-yard touchdown pass with one second remaining.

The Heels took a commanding 38-10 lead into the locker room. The second half was mostly tit-for-tat. In the end, UNC won running away, 66-31, and the Victory Bell remained light blue for another year.

Frank Beamer is a legend. We can all agree on that. “Beamer Ball” became his namesake. Having the ability to score from anywhere and everywhere on the field made some of his teams untouchable. It would stand to reason that in his final game in 2015, the Virginia Tech atmosphere would reflect that.

It seemed, though, that UNC was able to overcome the emotions of the day and play their brand of football. They seemed confident in their 14-point lead they carried with just over four minutes left in the game. That is until Williams fumbled and the Hokies took over. Within three minutes, Virginia Tech scored twice on two UNC fumbles. Carolina got the ball back with just over a minute remaining. They could not advance it across the 50 and punted to finish out regulation.

Virginia Tech drew first blood in the overtime period with a 41-yard field goal. UNC, however, got the last laugh as Williams found Quinshad Davis for a five-yard game-sealing touchdown. With this win, the Heels moved to 10-1 overall and 7-0 in ACC play. They clinched the ACC Coastal Division and earned a spot in the ACC Championship game against eventual national runner-up Clemson.

After wins over NC State in 2012 and 2013, UNC lost an ugly affair in 2014 by a wide 35-7 margin. The 2015 version had quite a bit riding on it. Sure, UNC had already long been bowl eligible as they entered the game at 10-1. They had also already clinched the ACC Coastal Division Title the week before with an overtime victory over Virginia Tech.

What this game had was the chance to end ACC play undefeated. UNC seemed poised to do just that as they jumped out to a commanding 35-7 lead before State added a late 2nd Quarter touchdown to cut the lead at the half to 35-14. The Heels and the Wolfpack traded touchdowns and field goals to push the score to 45-26. With just under two minutes remaining, State added a touchdown to make the 45-34. UNC simply ran out the clock to claim their victory. UNC won 11 games for only the fourth time in program history, the first time since Mack Brown’s last season in 1997.

2016 saw UNC rekindle some of the magic they had during the 2014 season. These games seem to come in bunches and have eerily similar sub-plots for Fedora’s Heels. This time, the Heels would need that last-second magic in back-to-back weeks. Both weeks also involved the Heels scoring 37 points.

Against Pitt, UNC could never get their offense in the groove. However, they never let Pitt out of striking distance as the largest lead only amounted to 13 points. UNC slowly reeled themselves back in.

Tell me if you’ve heard this one before: UNC got the ball back with just over three minutes remaining and trailing 36-30. A 17-play (yes, SEVENTEEN) drive that included three fourth-down conversions culminated with a two-yard touchdown pass from Mitch Trubisky to Bug Howard.

As the final seconds ticked off the clock, UNC stopped the kick-off return just across midfield, and etched another last-second win in the Fedora Era. Little did they know they weren’t finished yet.

UNC entered the game against Florida State as a heavy underdog. FSU had not lost at home in 22 straight games and entered this game ranked 12th nationally. UNC surprised everyone by jumping out to a 21-0 lead with the help of three missed 1st Quarter field goals by FSU kicker Ricky Aguayo, the second of which was blocked by UNC.

FSU stormed back to tie the game at 28. A UNC touchdown made it 34-28 and the PAT was blocked. FSU scored with just 23 seconds remaining to take the one-point advantage at 35-34. A deep Trubisky-to-Hollins pass and a defensive pass interference call put Nick Weiler in range for the game-winning 54-yard field goal. The kick, and the celebration, will live on in UNC lore for the foreseeable future.

Editor’s Note: Over the next few days you will be introduced to the new faces of the Tar Heel Blog staff. Kyle happens to be the first of those new writers. He’s a 29-year-old middle school History and English teacher who also serves as the head coach of his school’s boys basketball team. We’re very excited to have Kyle on board, and hope you’ll join us in giving him a warm welcome!

This article was originally published at http://tarheelblog.com (an SB Nation blog). If you are interested in sharing your website's content with SCACCHoops.com, Contact Us.
Categories: Duke, Georgia Tech, Miami, NC State, Pittsburgh, UNC, Virginia, Wake Forest