The Race To The 2021 NBA Playoffs Will Be The Most Intense In Years - SCACCHoops.com

The 2021 NBA playoffs are around the corner, with the shortened regular season set to come to a thrilling end on the weekend. What makes this term’s culmination particularly exciting is the fact that the league has implemented a novel play-in structure. 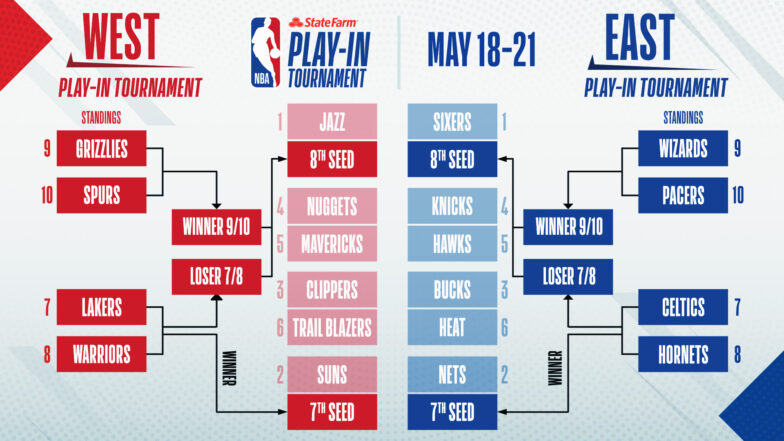 Traditionally, places one through eight are guaranteed playoff spots but, this time around, it’s going to be very different. The play-in format makes it so that only the first six teams in each conference automatically qualify. Teams seven through 10 will have a additional games to play to determine who gets to go in as seven and eight.

The structure’s explanation from the league’s official website could be read right below:

Basically, team seven will play team eight for the seventh seed. The loser of that game will play the winner of the game played between nine and ten in order to determine the eighth seed. The teams that qualify through virtue of finishing before seventh will have the luxury of an extra week to rest and prepare for the postseason.

The format has been met with some hostility from Los Angeles Lakers superstar LeBron James, who suggested that whoever came up with the idea should be out if a job.

"Whoever came up with that s--t needs to be fired," James said after the Lakers lost to the Toronto Raptors last Sunday.

The Lakers, who were in seventh place at the time of writing, are in danger of missing out on automatic qualification. Of course, that likely wouldn’t have been the case had both LeBron and Anthony Davis not been out with injuries for several weeks. However, the star’s anger should be directed at his teammates for not holding the fort in his absence, not the NBA.

The decision bodes well for the likes of the Golden State Warriors, Memphis Grizzlies, and San Antonio Spurs - although the currently eighth-placed Warriors would probably prefer going in as the last seed and calling it that.

"I get why the NBA is doing it," Cuban told ESPN last month. "But if we are going to be creative because of COVID, we should go straight up 1-20 and let the bottom 4 play in. This is the year particularly to do it since the 10 games cut [from the normal 82-game schedule] were in conference.

"The worst part of this approach is that it doubles the stress of the compressed schedule. Rather than playing for a playoff spot and being able to rest players as the standings become clearer, teams have to approach every game as a playoff game to either get into or stay in the top 6 since the consequences, as Luka said, are enormous. So players are playing more games and more minutes in fewer days."

"I don't understand the idea of a play-in," Doncic said prior to the team owner’s complaint. "You play 72 games to get into the playoffs, then maybe you lose two in a row and you're out of the playoffs. So I don't see the point of that."

The person who LeBron has called on to be fired happens to be Evan Wasch, the NBA’s executive vice president of basketball strategy and analytics. He has since responded to the criticism with an insistence the league has done right by its teams and their fans.

“Obviously, we welcome feedback from our players and teams,” he indicated via text message last week. “But, on balance, we believe the play-in tournament offers more benefits than downsides.”

“You’ve significantly increased the competitive incentive in a much wider swath of the standings [for teams] to want to move up. The intent is to give more teams, more markets and more fans the feeling they still have something to play for. On that basis, it’s absolutely been successful.”

While LeBron is very much against the tournament given his team’s position - his tune was very different last year - the play-in factor does make NBA basketball a whole lot more exciting heading into the playoffs.

NBA scores and betting odds could be drastically affected by the decision, which makes for a great spectacle, especially where fans are concerned. It could also be argued that the teams who fail to make it past the play-in don’t deserve to be in the playoffs anyway.

Should the Lakers end up having to go through the tourney and then lose, would they have even made it past the first round of the playoffs? Probably not.

There isn’t a whole lot of waiting to do as we should know exactly who’s playing where and whose season is over by the time the coming weekend is over. This week’s activity could prove to be the most frantic collective end to a regular season in recent memory.

Teams out of the playoff race would typically take the tank route as soon as it became clear that no postseason basketball was in sight. However, this new format gives even the 10th-placed outfit a chance to sneak into the postseason. How’s that for intensity?