Before we spring forward to Clemson, let’s fall back to see how the two losses from last week are holding up. 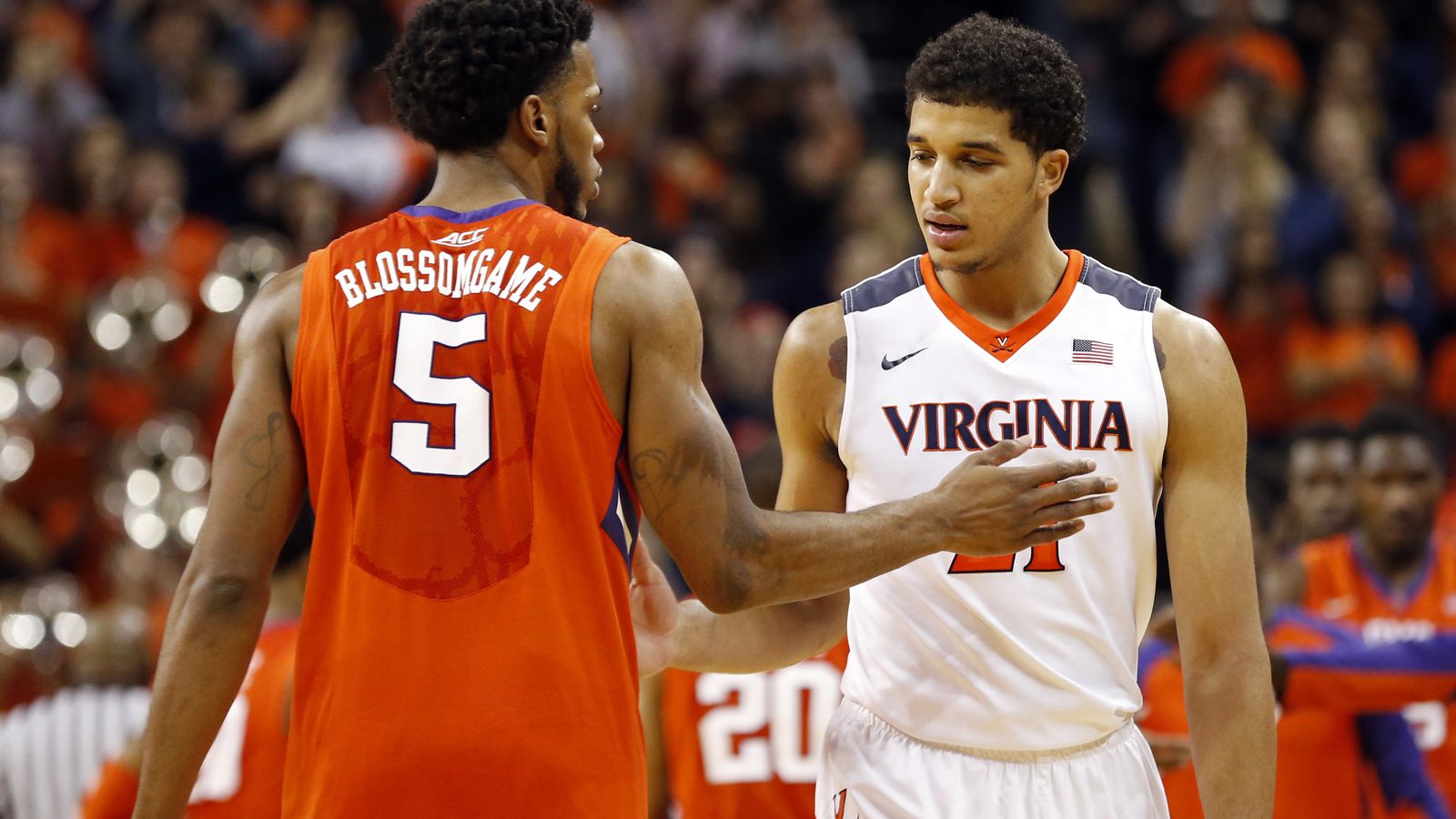 As you can see, that loss — despite happening at JPJ, where the potion of success and crowd energy had lulled me into a feeling of invincibility — is aging well. The ‘Noles are low key good and might be really good.

Now, Pitt, which I dismissed as a road loss to a good team…

Oh. There’s nothing wrong with either of those losses in a vacuum by these scores alone — ACC road games are tough gets. There is, however, something wrong with going down by 20+ at the half in consecutive games and sitting 13th in the ACC in defensive efficiency thanks to an interior defense made of Hot Now Krispy Kremes. This one might not age as well.

On to Clemson. The Tigers were going to be a tough out on the road anyway, returning most of the principals from the squad that gave us the business for 30 minutes in Greenville, but this year looks like a taller task still.

Clemson is 1–3 in the ACC and are probably feeling some pressure to perform tomorrow with a game at Louisville looming next and a path to the bottom of the league getting easier to trace. They’ve returned to the always-raucous Littlejohn Coliseum this season after a year in Greenville, and it will probably be more rockin’ than ever thanks to a reduction in capacity (to 9,000 from 10,500) and the cheap heat generated by the National Championship football team. It should be a test.

We’ve won five straight games against Clemson. In three of those five, a superlatively athletic Clemson wing (K.J. McDaniels once, Jaron Blossomgame twice) has scored 40ish percent of their points (a combined 78 of 177, or 44%), mowing through our defense like the Terminator to keep them close.

Clemson is playing a tiny bit faster than they have in previous meetings, ranking only in the bottom third nationally in adjusted tempo (68.4 possessions per game) thanks to a slight uptick in transition as a nod to the skill set of Blossomgame and their undersized guards. This should still be a slow game — after all, we’re dead last in the country in adjusted tempo at 59.1 possessions per game, and the defenses are 326th and 349th in longest possessions forced — but maybe not as slow as the last five, which have averaged 56.8 possessions.

Clemson’s offense relies on Blossomgame to control things — he’s taken 75 more shots than second place Donte Grantham — often getting his looks by starting at the top of the key to go ISO against smaller and weaker defenders, acting as the screener on pick and rolls and shooting over smaller guards on switches, or diving in from the wings after penetration. He’s got an 114 offensive rating in spite of a dreadful (7–46 for 15.9% — down from 44% in 2016) three point percentage thanks to taking half of his shots at the basket area and making 70% of them — a number that would be good if Blossomgame was Michael Ojo and is great for a 6'7'’ guy that flies in off of the bounce.

Beyond Blossomgame, the rest of the lineup is a Brownell special: two smaller shooters (Avry Holmes, who has taken two thirds of his shots behind the arc and made 38.9% of them and Sheldon Mitchell, a third and 38.5%) and a bigger one (Donte Grantham, 49% and made 34.4%) to spot up around the star and an athletic big (6'10'’ Sidy Djitte) who has no offensive role (7.0 ppg, ends just 12.9% of possessions he uses with a shot) but rebounds (16.9% offensive, 18.9% defensive) and blocks shots (4.4%). The bench is a trio of potential game-changers: guards Gabe DeVoe and Marcquise Reed (the teams third and fifth leading scorers, they average 4.2 assists and shoot 41.1% from three) and a transfer big in Elijah Jackson who is averaging eight points and two blocks in 16 minutes per game in his seven games since becoming eligible.

Their defense has let them down during this three game swoon. They gave up 1.13 points per possession to UNC and 1.21 to Notre Dame — both defensible, since those teams can fill it up — and then ralphed up 1.09 to Georgia Tech, who, even with that performance, is last in the league in points per possession (0.91).

The big holes have been on the defensive glass, since Djitte has often needed to stray from the boards to help on D with inexperienced guards Mitchell, DeVoe, and Reed getting heavy minutes, and Blossomgame has slipped a bit on the glass as he’s playing less four, and opponents getting hot from three (sound familiar?).

Clemson opponents are grabbing more than a third of their own misses (34.4%) for the year and almost 40% (37.9%) in four ACC games. That number is obviously skewed by UNC’s 51.1% (simply unheard of), but it’s still an issue with that performance forgotten. The Tigers then — by virtue of Brownell’s press-then-fall-into-aggressive-denial-man scheme getting loose on closeouts — surrendered 10 threes to UNC and 15 to Notre Dame.

I don’t know if either of these potential holes do much for us. We’re an OK three point shooting team, but we’re not prolific — threes are two of our every seven shots in ACC games, 14th in the league , and a few of our guys (Dev and Marial in particular) appear to be genuinely more comfortable taking a dribble inside the arc — and offensive boards are anathema to the Bennett philosophy unless there’s a singular talent (think Akil Mitchell, Mike Tobey) that is able to produce them on their own. However, Isaiah Wilkins has been doing just that, bringing in three in three of our last four games.

What we have going for us is a low turnover rate (just 8.7% vs. Pitt and 14.4% vs. Wake) and a steady hand or four against Clemson’s backcourt traps, a handful of players that are growing more comfortable attacking the rim (where Djitte can’t be everywhere), a length advantage (we have tall guards, Kyle excepted) and a defense that has historically stifled low-assist (Clemson assists on half of their baskets), ISO-heavy offenses. What we don’t have and probably need is someone who can at least slow Blossomgame (Dev is my first, second, and third choice — Marial is fourth), which makes me pretty, pretty nervous after the show he put on last season and a recent history of closing out crisply on three point shooters (a must on the three surrounding Blossomgame), though we did pick that up quite nicely in the second half against Wake.

Virginia:
G: London Perrantes — 6'2'’ sr #32
Last three games: 16.3 ppg, 9–13 on threes, 7–7 from the line, nine assists to five turnovers (which isn’t great, but is tolerable in the reflected light of everything else. This — especially the last few minutes of Pitt, parts of FSU, and the second half of Wake — is what I want and what we need.
G: Devon Hall — 6'5'’ jr. #0.
Devon is now taking 37.6% of his shots at the rim and hitting half of them, and while hoop-math doesn’t break things down by date, he was in the low thirties percentage wise in early December and late thirties at the end of the month.
F: Marial Shayok — 6'6'’ jr #4
Marial’s last three games: 13.7 points per game, 5–8 3PT (he only has nine makes for the year), nine rebounds, five assists, two blocks, and a steal. He’s done all of that in not even 25 minutes per game.
F: Isaiah Wilkins — 6'7'’ jr #21
Nine blocks and 10 offensive boards in our last four games.
F: Jack Salt — 6'11'’ so #33
Jack’s fouls called per 40 (5.5) are creeping up toward the sky-high 7.2 mark he posted last year. That dunk, though.
G: Darius Thompson — 6'4'’ jr #51
Darius taking drives all the way to the basket area is kind of a new leaf, and one I liked seeing. His 11 points were more than he scored in seven February games last season. He has 27 points in four ACC games, which is as many as he had last year over a 17-game stretch spanning January, February, and March. The biggest thing I like this year? The assist rate. He’s dishing dimes at a rate more consistent with the year he spent playing point guard at Tennessee than last year, when there were only a couple outcomes to a Darius possession.
G: Kyle Guy — 6'3'’ fr #5
Kyle wasn’t just going to walk in and have wire to wire good games. He needs to a.) keep shooting, b.) not let the rest of his game slump while his shot’s in one, c.) keep shooting, and d.) keep showing growth — for example, Kyle pulled down two tough defensive boards in traffic vs. Wake.
F: Mamadi Diakite — 6'9'’ fr #25
I want to see Mamadi around the rim more than I do 18–25 feet away. Currently, he’s taking a lot of long twos (26.4% of his shots) and threes (17%), which are shots he can make, but not ones that take rhythm and don’t take advantage of his athleticism. He seemed a little lost vs. Wake — especially on offense, where he clogged the top of the key — which is the first time I’ve really thought that in a while.

Clemson:
G: Sheldon Mitchell — 6'3'’ so #4
Vandy transfer starts but plays a little less than half the game at the point. Assist to turnover ratio looks a lot better if you throw out his one assist, seven turnover nightmare against South Carolina as fluky. Streaky as a shooter: nine of his 10 threes have come in four games.
G: Avry Holmes — 6'2'’ sr #12
Senior has earned his keep in the ACC, topping out as an undersized combo guard type who can light it up from deep (33.3% last year, 38.2% this year). Attempts two free throws for every five shots, so he’s a threat at the rim as well.
F: Jaron Blossomgame — 6'7'’ sr #5
Blossomgame may have been best served staying in the draft after last season: his scoring (18.2 ppg) is close to last season (18.7), but his shooting splits are worse, he’s rebounding less and blocking fewer shots, and, to this point, he looks like someone who may have simply topped out.
F: Donte Grantham — 6'8'’ jr #15
A stretch four that isn’t particularly stretchy (35% on threes) or interested in getting his hands dirty like a traditional four (6.6% OREB, 13.5% DREB). His offseason project was to draw more fouls, instead, his FT rate has dropped from 18.5 FTs per 100 shot attempts to 11.2.
F: Sidy Djitte — 6'10'’ sr #50
Not a great athlete, but he’s big and never stops moving, and that’s been enough to make him a decent shot blocker and a formidable rebounder. Foul trouble for him would be nice.
G: Gabe DeVoe — 6'4'’ jr #10
You may recall DeVoe as the Clemson player who fired haphazard contested threes in the Tigers’ trip to JPJ that were one step removed from stripping off his Clemson jersey to reveal crossed sabres and hitting Blossomgame with a chair.
F: Elijah Thomas — 6'9'’ so #14
Thomas is a quality third big. He’s down around thirty pounds from the end of his stint at Texas A&M, and swings for the fences: he has eight blocks and 10 fouls in 47 minutes over Clemson’s last three games.
G: Marcquise Reed — 6'3'’ so #2
Reed might be the Tigers’ best guard. Coming off the bench spelling both spots at times, he’s scoring in double figures, finishing at the rim, hitting 46% of his threes, and distributing… some. If only he was two inches taller.

Verdict:
Vegas thinks we win by two and a half. Ken Pomeroy thinks we win by two. I think this unpredictable, still settling team makes me want to get out of the prediction business. We’ve got a deeper, bigger, and more athletic group. Clemson is more experienced, playing at home, and riding a need to turn things around. If we avoid turnovers, at least hold our own on the glass (say, 75% of defensive boards and 30% of offensive chances), and get consistent offense from London, and two or three of Devon, Marial, Kyle, and Darius, we should be in good shape.

This article was originally published at https://medium.com/@universityball/. If you are interested in sharing your website's content with SCACCHoops.com, Contact Us.
Categories: Clemson, Football, Georgia Tech, Louisville, Notre Dame, UNC