Virginia's win over Boston College was fun. It felt like one of the blowouts from early in the season, where no individual starred but everyone got to play and chipped in some. It was nice to get one of those and this one at home before next week, which should be a challenging (but fun) week of hoops with trips to Notre Dame and Villanova. 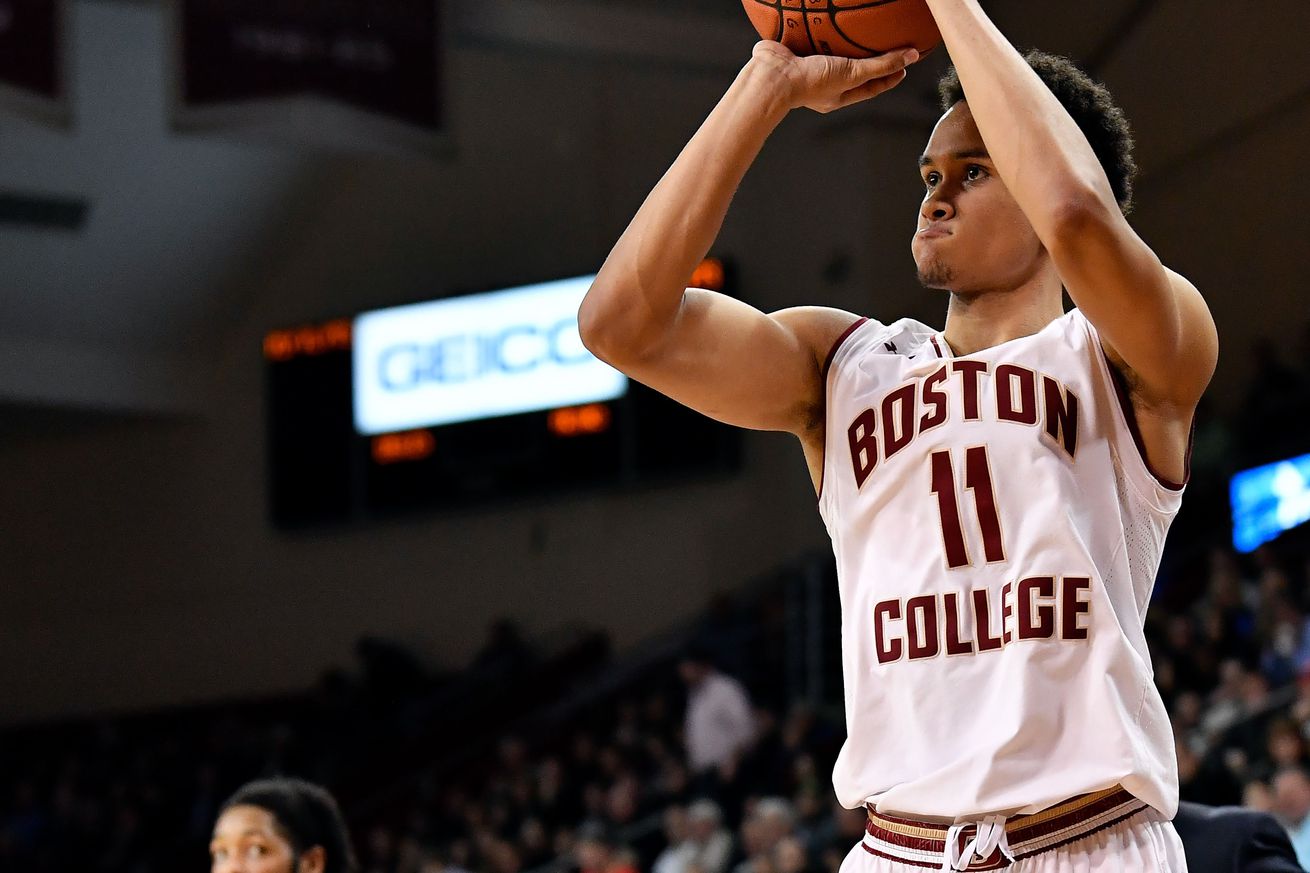 It feels like we’ve settled on a starting lineup, with Marial a close-enough-to-perfect fit alongside Devon and London in the backcourt. Per Ken Pomeroy’s site, we’ve used the four guard lineup — groups that feature one of Kyle (6.1% of the time) or Darius (5.5%) instead of Jack — 11.6% of the time over the last five games, a group capable of going five-out that puts Devon at the four and Isaiah at the five.

What if I told you… that we could keep that five out versatility without sacrificing rim protection? London, Devon, Marial, Isaiah, and Mamadi would rarely face mismatches on D thanks to the length of players two through five, and would be terrifying in the passing lanes and helping around the rim. Offensively, one through five would be at least capable of hitting the three (Wilkins is 4–7, Diakite 3–9) or taking two dribbles and getting to the rim. I’m not saying it should be our permanent starting lineup, but I’d love to see that as the next wrinkle CTB folds in. Diakite should see time with more than one starter at a time. Moving on…

Georgia Tech is a different group than the one that handed us our asses in Atlanta last year. Brian Gregory and his unyielding mediocrity are gone, replaced by the potential mediocrity of Josh Pastner. Four of the five GT starters — including the venerable Marcus Georges-Hunt, Adam Smith (who hit four threes in the game), Charles Mitchell (who went to MD first), and Nick Jacobs — are gone, replaced by reserve holdovers and freshmen. It’s the dreaded transition year, where the new coach hasn’t yet established the team’s identity, but much of the the old coach’s talent is gone.

Georgia Tech is having a bizarre season. They beat VCU at the Siegel Center in December before needing a furious rally to scrape past North Carolina A&T a few weeks later. They opened ACC play on New Year’s Eve by handling UNC at home before losing by 53 to Duke in Cameron Indoor five days later. They’ve since added wins over Clemson and NC State to sit at 3–2 in league play and 11–7 overall, which while not great, is worlds better than the second-to-last the league’s coaches had them tabbed for at Operation Basketball. Something is going right for Pastner.

The first and literally biggest reason that Georgia Tech isn’t going winless in the ACC (ouch, Jon, though I admire the bold take) is the improvement of junior center Ben Lammers. A 113 minute afterthought as a freshman and a certified stiff (albeit one that blocked 3.5 shots per 40) as a sophomore, Lammers has slowly emerged, like a dinosaur cracking through the ground and crushing cars as it walks up I-95, as a genuine, classic center bent on destroying everything in his path. On D, he’s the reason Georgia Tech is second in the ACC in opposing two point percentage: he’s blocking 3.6 shots per game, good for 10.4% of two-point tries (26th in the country) while committing just three fouls per 40. On the other end, he’s shooting 71% at the rim, showing a little midrange action, making more than 80% from the line, dishing two assists per game, and leads the Jackets in scoring by a hair over…

Freshman Josh Okogie, the second reason that Georgia Tech is OK. Okogie wasn’t a newsmaker as a recruit, but he’s scoring 14.6 points per game and hung 27 on UNC and 26 on NC State. He can’t shoot (11 threes, 34%), but has a shifty set of dribble moves that get him into the lane, where he’s adept at either finishing or drawing the foul (he’s taken 105 free throws, while our entire starting lineup has taken 135). Okogie is a work in progress, but he at least gives GT something to look forward to.

Even with those guys, the Jackets as a whole are a mess on offense. The ball moves — GT assists on more than 60% of their makes — but it doesn’t often move into the basket. They’re dead last in ACC play so far in EFG% (45.9%) and points per possession (0.97), are second-to-last in two point (44.1%) and three-point (34.9%) percentage, and look for the three (22% of their shots) the least often of anyone in the ACC, which is a stat that should bring a sigh of relief to anyone rooting for Virginia tomorrow. They have three guys that can make it, but only two that should take it. Point guard duties are split between freshman Justin Moore and senior Josh Heath, but they both have higher turnover rates (27.3 and 29.8%, respectively) than assist rates (26.7, 25.4%) for the season. The assists come by committee, as all six GT regulars (more on that later) average at least 1.4 assists per game.

Lammers is Georgia Tech’s defense. They enjoy the blocks, accompanying low percentage at the rim, and the intimidation that comes with them (and really enjoy how Lammers blocks without fouling), but they surrender the jumper on the regular (36.1% 3PT in ACC games), don’t force turnovers (13th in the ACC in opponent turnover percentage) and allow opponents to grab more than a third (34.9%) of their own misses. This could be a game for Isaiah Wilkins to make another run at double figure rebounds, so long as he doesn’t do so by leaving Quinton Stephens open.

We should win this game handily. Georgia Tech goes six deep and can’t score, and while our defense has been rough at times in league play and I distinctly remember how they burnt us for 8–13 combined three point shooting from Adam Smith and Quinton Stephens last year, Smith is gone and Stephens is a 32% shooter from distance who went 1–12 from the arc in the games following last year’s game. I have faith in our long-standing ability to shut down teams that rely on getting into the lane and thrive on drawing fouls; that’s something that’s trending back to normal after we posted abysmal opposing FT rates in the Louisville win and losses to FSU and Pitt. I don’t think Tech has the shooting, the experience, or the game plan to score enough to win in our gym.

Lammers is a threat on D, but we should absolutely challenge him. We’re a team of guys (and Guys) that can score away from the rim, and this *might* be a time to embrace the three (we’ve made at least 40% in five straight games and 12 of 17) a little bit more and spread Georgia Tech out. I like the potential of the four guard lineup in this game — it gives us someone to stick on Stephens, who is 195 pounds at 6'9'’ and takes mostly threes, and also increases the number of handlers and distributors we challenge Tech with.

Virginia:
G: London Perrantes — 6'2'’ sr #32
It was nice to see London get most of the night off against BC — even though he played 20 minutes, his foot wasn’t and didn’t need to be on the gas.
G: Devon Hall — 6'5'’ jr. #0
Devon’s offensive rating has jumped 16 points from last season, thanks to fewer turnovers and better percentages across the board. It was nice to see him dish six assists (back to his point guard roots) against BC. He’s up to six of eight games in double figures and inching toward acceptance that this is him now.
F: Marial Shayok — 6'6'’ jr #4
Marial’s aggression is a great fit in our starting lineup, as well as how combining him with Devon on the wing gives us perhaps our longest and most mindful defensive set.
F: Isaiah Wilkins — 6'7'’ jr #21
Wilkins’s last three: 7 points, 4 boards, 5 blocks vs. Wake. 8 points, 13 boards, 2 assists vs. Clemson. 11 points, 9 boards vs. BC. He’s taken his stat-stuffing up a level of late.
F: Jack Salt — 6'11'’ so #33
Jack has nine points, ten rebounds, and 13 fouls so far in 2017. He sets killer screens and will hit people at the backboard, but I wouldn’t mind seeing him down around 12–15 minutes.
G: Darius Thompson — 6'4'’ jr #51
Darius shot 19.5% on 41 threes at Tennessee and has hit 34 of 85 (40% on the nose) in most of two seasons at Virginia. Come here and learn to shoot.
G: Kyle Guy — 6'3'’ fr #5
Part of what makes Guy’s stints on the court exciting is wondering which game will be the next offensive outburst, because you know it’s coming, you just don’t know when yet.
F: Jarred Reuter — 6'7'’ so #31
Jarred is a situational guy — you can’t play him against a more lithe four — but I’ll give him this: he’s produced offense for us a few times this year when we’ve needed him to.

GT:
G: Josh Heath — 6'2'’ sr #11
If “limited but pesky” is a nice thing to say about someone, I’ll say it about Heath. He scored 15 in the UNC upset and dished 10 assists when they beat NC State, but has eight turnovers over the course of their last two games, and they get in trouble when he tries to do too much.
G: Justin Moore — 6'4'’ fr #0
Moore is neither the country star Justin Moore or my high school friend Justin Moore. Skinny guard is turnover-prone as mentioned above and can’t shoot yet — his splits (40% from the floor, 47% from the line, 16.7% on threes) are frightening.
G: Josh Okogie — 6'4'’ fr #5
Impressed with how physical and low-turnover he is for a freshman guard.
F: Quenton Stephens — 6'9'’ sr #12
Stephens is shooting 35% (32.9% on threes) and has an ORTG of just 94. Two things to keep aware of: one, he’s a very good defensive rebounder (19.9%) for his size (195 pounds) and two, as we all remember, he is prone to getting hot from three and just hit five in their loss to Virginia Tech.
C: Ben Lammers — 6'10'’ jr #44
We will need to be crisp in getting back from the trap against Lammers, as he’s dished multiple assists in six of GT’s last eight games and is tall enough to look over Isaiah and Jarred Reuter.
G: Tadric Jackson — 6'2'’ jr #1
Comes in gunning (29.3% of his possessions end in shots) and that’s OK by Pastner — he’s their best three point threat (41.7%, 20 makes).
G: Corey Hayward — 6'1'’ sr #30
Double-digit minutes just once in the last month as the Jackets have gone to a six man rotation.
F: Abdoulaye Gueye — 6'9'’ jr #34
Sophomore has shown a willingness to block shots (4.6%), grab offensive boards (10% of chances) and has hemorrhaged turnovers (46.6% of possessions!) in his very limited minutes.

Verdict:
This one has Pack Line Pledge potential. Maintain what we’ve been doing of late (touching the paint, hitting threes, moving the ball more) on offense and keep Okogie out of the lane, and this should end up about how Vegas (17) or Pomeroy (16) calls it.