After latest loss to FSU, does Clemson have any reason to retain Brad Brownell? - SCACCHoops.com

After latest loss to FSU, does Clemson have any reason to retain Brad Brownell?

Two weeks ago I made this statement about Brad Brownell’s tenure as the head basketball coach at Clemson University possibly nearing an end. 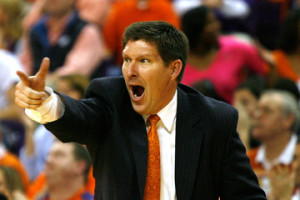 The season as we got into conference play, it became a one disappointment after another. 6 of the 8 Tiger ACC losses have come by single digits. End of the game sequences have been typically marked empty offensive possessions, defensive lapses, and mistakes from the bench…

…I’m getting the sense in a league filled with future Hall of Fame coaches, that Brownell just isn’t capable of getting Clemson over the hump. He’s got 1 month to prove us wrong.

Well it hasn’t been 1 month, but I think we have our answer about Brownell. There was another late defensive lapse in losing to Virginia Tech on a last second shot. Saturday in position to gain a last gasp big win against Florida State, Clemson had two empty positions on offense in the final seconds. Jaron Blossomgame, Clemson’s best player, did not touch the ball on either possession. The Tigers now sit 14-14 ( 4-12 ) in a season that’s gone completely wrong.

My podcast partner @Hokiesmash_ASD is already suggesting VCU headcoach Will Wade as a coaching candidate.

After 6 straight seasons of missed NCAAs ( I think we can safely say there will no NCAAs this year ), are there any reasons to retain Brad Brownell?

One reason we previously wrote about…

Working in Brownell’s favor to extend his tenure is he is only in year 1 of recruiting with a new arena at Clemson, but how much should the considered?

Former Georgia Tech head coach Brian Gregory spent 4 years in a renovated McCamish Pavilion and never once made the NCAA’s.

What about the recruitment of 5-Star basketball player Zion Williamson out of Spartanburg, SC? He’s a national consensus top 10 player, and could be a game changing recruit. Schools like North Carolina and Duke are pushing hard. Is it worth to wait through the April/May signing period? I think you can make argument to wait a couple of more months to make a move. I’m 50/50 on this one.

Brownell does have a hefty buyout. I said back in 2014, that I questioned this deal. Now Clemson is on the hook for $3.5 Million if Brownell is let go. The problem is waiting another  year only saves $500,000. The buyout never goes below $3 Million, until the end of contract that runs through the 2019-2020 season.  So financially unless you are committed to Brownell until the end of his contract you aren’t saving much.

There was one more reason given to me from @whodoesblog. I call this the Frank Beamer argument – Big success after 5 years of average or below average seasons.

@TalkinACCSports Best argument may be, “Look what happened when FSU didn’t fire Ham in 2008,” but that’s a big stretch at this point.

Leonard Hamilton missed the NCAA’s his first 6 years at Florida State. He then made 4 in row, and that included an ACC Title. He has a top 25 team this year. Sure success can happen for Brownell, but as was just said it is a stretch.

Frankly I’m not seeing any really strong arguments to keep Brownell on at Clemson. It’s a rough business, but coaches are well compensated to win games, and Brownell just isn’t getting it done. He’s a decent enough coach, but seems more suited for the mid-major level.

This article was originally published at http://www.AllSportsDiscussion.com. If you are interested in sharing your website's content with SCACCHoops.com, Contact Us.
Categories: Basketball, Clemson, Duke, Florida State, Georgia Tech, Recruiting, Virginia Tech